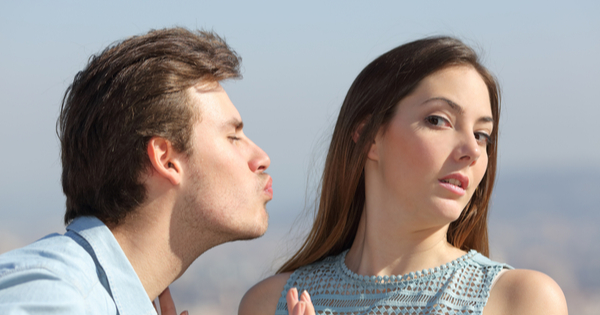 It was a cool Friday evening, I closed my laptop to wrap up my freelancing work for the week. I ironed my clothes, took my bath and decided to do what I usually do during the weekend — visit my girlfriend.

I booked an Uber, carrying the flower vase I designed with our picture, I left my place for her’s. I got there in no time.

Since I was carrying a surprise, like a smooth criminal, I opened the door silently and sneaked in successfully.

As soon as I found my way into the living room without noise, I over-heard her talking loudly on the phone. Then I knew she was talking to her best friend from childhood, whom she only talks to on loudspeaker.

After I was done taking off my shoes, I began the journey of walking to her room. Then I heard her friend ask, “How about Mauris, how’s it going?”

Kpassss! The glass flower vase I was carrying found its way on the floor! Not because my hands was slippery, nor was it for the sake of the question, but it was solely because of the reply from my girlfriend. She said …

“Mauris makes me feel alive on the bed, he can provide for my needs, but I don’t want to end up with him.”

I couldn’t believe my ears.

“D*mn! I thought I had it all right, and was doing the right thing.” I thought!

So I turned my back, and began walking towards the door. This time, unlike a smooth criminal, I left like a chased criminal, because the more she kept calling my name, the faster I wanted to get out of her house.

After a series of missed calls from her, I blocked and deleted her number! The next morning, I opened my door to a gentle knock, and there she was standing.

Before I could say a thing, she made her way inside! She began to give me that pathetic pity look which I hate. I wanted to walk into my room, lock my door and play loud music because I didn’t want to be around her and I also don’t want to be rude and chase her out of my apartment.

Then she said she had a confession to make! You will not believe what she said. I heard the most disheartening words any man who’s in a loving relationship will not want to hear from the woman who claims to love her. She opened her mouth and said …

“I’m so sorry Mauris, I know you won’t take this lightly … but I got engaged to David last week and I’m in the process of planning my marriage, that was why I was on the phone with my friend., I’ve been waiting for you to make a silly mistake so that I can call it quits, but I’ve had no luck with that.”

For the first time ever, I was paralyzed in my thoughts. I had no idea of the state I was in, I mean I couldn’t qualify my emotions, but you can guess they were of no good!!

I began begging, I begged, and begged over again — not because I wanted her to break off her engagement but because I’m a man who believes in learning from my mistakes, therefore, I wanted her to tell me the areas and things which I’ve done wrong.

Then she packed her things and left me!

At that moment, I began thinking hard, like a student who’s sitting in an exam hall that needed a miracle answer to make a pass mark. Then like a student who’s got luck on his side, after some time, I finally found an answer! I was able to trace that arrogant and controlling attitude to the one video I watched some time ago from Youtube. The video was about how to get a woman to desire you, and one of the key message which I to my heart was …

“If you want your woman to respect and still love you, you have to be a dominating man.”

When I heard the coach talk about that, without any form of hesitation and verifying the facts, I decided I was going to be a dominant man because other than the fact that I wanted my girl to love me more, that sentence triggered the ever-lasting cliche that “women find men who are dominant more attractive.”

So, from then, I began doing things that I felt will position me as a more dominant man who she’ll love more and respect.

Every woman enjoys it when a man checks up on her. But in my case, it was different. I took the checking up on your partner thing too serious.

After I saw the video about being dominant, my behaviour was not far from that of a mother. I’d pick up my phone to call her and after saying “Hello” the next thing I’d often say is; “where are you? who are you with?” I thought by doing that she’d see me as a dominant man.

But the truth is, just as we couldn’t wait as teenagers to grow a little older, so we can be free and leave our parents house because they were always pestering us with aggressive check-up questions, that’s how she couldn’t wait for the day I’d make a mistake so she’d cut me off.

Another way that I mistook controlling for dominating was by acting bossy. Whenever she said she’s going to pay me a visit or coming over, I’d pick up the phone to call her, then I’d say, “You said you’d be here in 15 minutes, it’s 20 minutes now, I want to see you here in the next five minute.”

What I forgot was, a lot of people hate or are uncomfortable with their bosses, and that’s why they tend to quit their job or look for a job elsewhere. And like an uncomfortable employee, she went out to look for another partner.

Not regarding the fact that I don’t like people telling me what to do. When we’re going out, I’d often tell her “I don’t want you wearing this or go pick something else to wear.” According to her, this was one thing I did that killed some of the love she had for me.

Also, as a freelance copywriter, I don’t like being disturbed while working, so I’d often ask her not to call me except it is important. This, therefore, made her seek the company of her friends more.

That became a problem for me, because when we’re together during the weekend, I’d tell her “stop talking to your friends on the phone and make time for me.” Ignoring the fact that when I told her not to call me, it was these same friends who I’m asking her to stop texting or calling who were there for her when I wasn’t. And by doing that it positioned me as a needy man.

These are the things she told me I did wrong, that made her not want to end up with me, which I also corroborated with evidence this time, that no woman enjoys being in a relationship with a man who is always controlling regardless of how good he is in bed or the material things which he can provide.

It pains me deeply that I lost her, because all I was trying to do is become a better man for her.