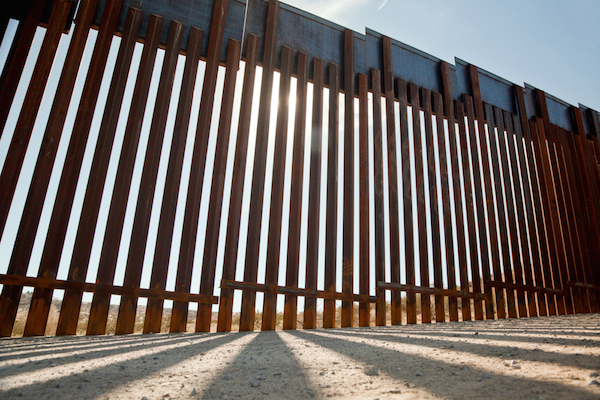 Trump hopped onto Airforce I on Tuesday, June 23, 2020 traveling to Yuma, Arizona. Once there, his caravan composed of primarily white people journeyed due south in front of reporters and cameras from throughout the country and the world to expose his erect (some replacement, some newly extended) large 200-mile-long protrusion across the southern border with Mexico.

“Good fences make good neighbors,” the proverb Robert Frost embedded in his famous poem “Mending Wall,” has been misinterpreted and exploited by Donald Trump for his own distorted means in attaining his end-goal of keeping as many people of color out of the United States as he can.

His campaign slogan of “Make America Great Again” served as a not-so-subtle dog whistle to “Make American White Again,” which it never was from the very beginning ever since Europeans killed and stole the land from First Nation peoples.

Robert Frost’s poem was a polemic arguing against building fences (walls) that separate us from our neighbors. Opening with the line, “Something there is that doesn’t love a wall,” continues to describe the narrator’s efforts to convince his neighbor not to construct a fence.

Frost quoted the proverb as an ironic ploy to express his deeply held view that physical and figurative boundaries separate people from one another and from themselves.

Walls, in the literal and metaphorical sense, however, stood as the foundation of Donald Trump’s campaign and his entire presidency, and now again in his reelection efforts. In fact, walls define the focus of his entire life.

He recently walled off peaceful protesters in front of the White House with a high mesh fence and an irritating plume of mustard gas set off by armed officials so he could conduct a photo op holding a bible upside down in from of a church.

Since taking office, with his “America First” declaration, Trump has placed a figurative diplomatic concrete wall around the United States by weakening our commitment to and engagement with NATO allies and the World Health Organization and by pulling out of our treaty obligations with Mexico, Canada, and Iran.

He has symbolically positioned the U.S. in a cage by divorcing from the Paris Climate Accords and by shutting his mind even to the possibility of human-related climate change.

He continually places access barriers around the Constitution, and particularly the First Amendment’s “free speech” clause, by attacking, lying to, and restricting the media.

Trump supports impediments to the voting booth with measures like gerrymandering and other suppression campaigns by reducing the number of polling stations in primarily minoritized racial communities, by opposing mailing-in voting, and by limiting days and times for pre-election-day voting.

If his unqualified support for Republican attempts to repeal and “replace” the Affordable Care Act eventually succeeds, an estimated 30 million lower-income people will find themselves surrounded by impenetrable obstacles to quality healthcare.

Trump’s incarnation of Nixon and Reagan’s “law and order” refrain can be translated as let us lock up more people, and particularly people of color, behind high walls and razor wire.

His administration has padlocked out qualified trans personnel from military service, and entered a legal brief to the Supreme Court in attempting to prevent “sexual orientation” and “gender identity” from categories interpreted under “sex” against employment discrimination in Title VII of the Civil Rights Law of 1964.

Trump and his administration have worked to toss “Dreamers” over onto the south side of his border protrusion in the Supreme Court by reversing former President Barack Obama’s executive order under the DACA program.

Donald Trump cares nothing about a physical or symbolic barriers’ effectiveness or cost because he constructed the idea of a wall as political bait in the minds of the electorate to rile and hook people into supporting him. In this way, he sufficiently distinguished himself in the 2016 primary season from all the others in the well-stocked swamp of contenders.

Though the U.S. border with Canada is literally twice the length as that with Mexico, and several suspected and known terrorists infiltrated down from the north, Trump’s total focus has been to stop supposed terrorists, drug and human traffickers, criminals, gang members, and “illegal aliens” from the south.

The current President is well-versed in the notion of walls in all their guises.

Trump’s family’s wealth and privilege walled him off from having to serve in the U.S. military during a mandatory draft. He and his father lost a lawsuit charging them with racial discrimination by locking out people of color from renting and purchasing apartments in their properties.

Donald Trump, arguably the more prominent of the so-called “birthers,” attempted to wall-off President Obama by continually arguing that he was born outside the United States, even well after the President released his official birth certificate. This along with his supposed investigations into Mr. Obama’s time spent in Indonesia as a child, and inquiries into his African roots on his father’s side coexist as not-so-veiled xenophobic and racist rants.

Throughout his run for the White House, he threatened to restrict access of all Muslims into the United States.

Donald Trump has dedicated his entire life in erecting walls to divide and conquer, to “win” for himself at any cost to his now non-existent sense of dignity, integrity, and empathy.

He has assembled a self-imposed blockade to keep out information, facts, and truth. The only things permeating his self-described “artistically-designed steel slats” embedded in reinforced concrete of his border wall are feelings and conclusions he reaches by gut intuition alone.

The Chinese constructed, repaired, reconstructed, and extended their “Great Wall” for over 2,000 years. It ultimately reached the length of 3,700 miles by the end of the 17th century, after which it eroded to its current state of decay. With all the effort and expenditure of resources going into the Wall, it never functioned as it was meant to since enemies of the great Chinese dynasties found ways of breaching this intended grand barricade.

Though the Soviets fortified their Berlin Wall with armed guards who shot anyone attempting to scale its heights – in either direction – an estimated 5,000 people, nonetheless, escaped its confinement between its construction in August 1961 to its demolition in early November 1989.

The Soviets did not keep detailed records, but estimates range from 136 people shot by guards to upwards of 240 killed in shootings, accidental falls, and in suicides following failed attempts at escape.

Trump’s attempts to construct 15th-century barrier technology, which did not work even in the 15th century, will certainly drain and waste valuable resources that could be used effectively for other national projects, such as rebuilding and replacing the nation’s crumbling infrastructure.

The word “bridge,” however, is simply not in Trump’s meager vocabulary.

Sigmund Freud once quipped that “Sometime a cigar is just a cigar.” Well to Trump, usually a wall is more than just a wall.

Facebook116Tweet1PinEmailShares117
wpDiscuz
0
0
Would love your thoughts, please comment.x
()
x
| Reply
Share this ArticleLike this article? Email it to a friend!
Email sent!