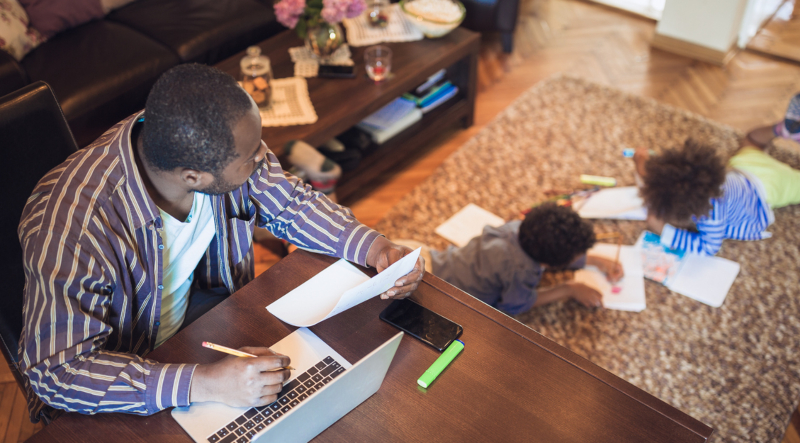 The Real Dads™ Network is the outgrowth of the award-winning documentary Real Dads – Black Men on Fatherhood (2000) which included commentary by the late Ossie Davis and was directed by Derek Phillips and Nikki Dees.

The purpose of the documentary was to show positive black fathers who were actively involved in the nurturing and the raising of their children. As a result of the documentary, it became evident that there was a STRONG NEED for an organization where fathers could:

– Tell there stories and share their experiences
– Get information about being better fathers
– Have real conversations about manhood, fatherhood and family
– And feel connected to something powerful and empowering

Thus in 2004, the Real Dads™ Network was founded by Derek Phillips.

The mission of the Real Dads™ Network is:

Create a culture where all the fathers are actively involved in the parenting process, and are portrayed and viewed as exemplary role models by society.

The mission of Real Dads™ Network is to:

– Strengthen the institution of the Family by recognizing and promoting positive aspects of fatherhood in all media.
– Provide fathers with a support system that connects them to resources which are designed to empower them to be Real Dads: Present, Providers, Protectors and Peacemakers.
– Advocate for shared parenting as the standard for public policy decisions.
– Collaborate with organizations to create positive outcomes for fathers and their children.

Derek Phillips is the founder and Executive Director of Real Dads™ Network, an organization that is committed to strengthening the institution of the family by promoting the positive aspects of fatherhood in the media. It is their belief that children do better, both developmentally and in the attainment of life opportunities, when both parents are actively involved in parenting, regardless of the marital or living circumstances.

He is also the founder and President of Jorma Productions, an independent production company (affectionately named after his two daughters) that is committed to creating projects and programs that are educational, inspiring and empowering.

Derek was in education for over twenty years in New York City.

Derek is an active member of Alpha Phi Alpha Fraternity Inc. and through his works, and actions and words, and actions, he is committed in educating, uplifting and empowering our youth and the community. His motto is “If everyone does a part, then no one is left doing the whole thing.”

He resides in Peekskill, New York with Maria his loving wife and Jordyn and Maya, his two beautiful daughters.

Recently, Derek was on our show.

During our conversation, Derek talked about:

– Some of story including not being interested in school when he was young, his mother dying when he was ten, his father not being in his life when he was growing up, no father mother passed away and growing up in a dysfunctional family
– Learning on how to be a parent by raising his nieces
– When did he realize that he had to something involving fatherhood
– The story behind Real Dads™ Network
– The insights he received about fatherhood after him being involved in education for over twenty years
– The success of the Daddy Daughter Dance, Real Dads Week and other successes in the journey
– The continuous challenge that many Black fathers have providing for their children and some of the other challenges that Black fathers face
– How did getting married, having children and his wife have impacted his thoughts about fatherhood
– Black fathers and Black dads who are separated and divorced who want to spend time with their child(ren)
– The importance of Black men taking care of themselves
– Some of the services that the Real Dads™ Network offers
– What’s up next for the Real Dads™ Network
– His message to non-melanated people, the Black community, Black mothers and Black dads about Black fatherhood
– What are Black fathers telling him about 2020

You can find out more information about the Real Dads™ Network via: