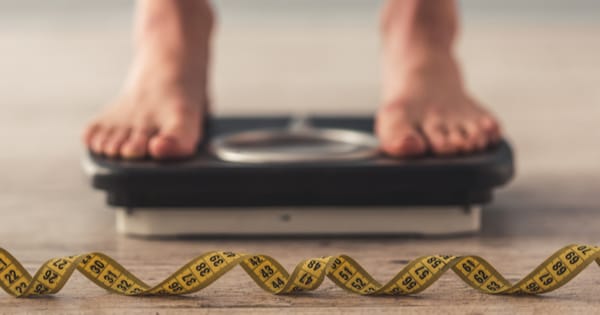 The trauma is in my head.

To Emily Kate, who recently shared her take in the form of an open letter on how to cure an eating disorder, I want to say, “Thank you.”

Sticking your neck out and saying, “Here’s the truth as I see it,” is brave no matter how you slice it because people will inevitably disagree. When you are talking about vulnerable topics like mental illness and addiction, that disagreement can feel like a personal assault. I see the thought that went into the letter and I would be doing a disservice if I didn’t take the time to reply with my own truth.

The premise that all we need to do is eat to recover is a glorious one. Wouldn’t it be great if it were that simple? And it makes some sense. It’s true that a person operating with a nutritional deficit cannot access their full cognitive capacity.

Unfortunately, this is a problem that the whole of my intellect, operating at 100%, can’t solve. In fact, my intellect is actually a significant part of the problem and has been weaponized against me.

It’s amazing the degree of dysfunction the brain can rationalize when it’s motivated by primal fear and excruciating pain.

And eating simply isn’t the fix. It can’t be. An anorexic person can eat all day long, and it won’t heal the dysfunctional ruts in their brain that drive the behavior. The ones that were created in response to trauma and abuse or the ones that are a byproduct of PTSD. Otherwise, why wouldn’t we just hook all of us up to pick lines and NG tubes and pump in TPN (which it sounds like we have both done) and have our problems solved with caloric bombardment? That would be the gold standard of treatment…if it worked. It would be so fucking simple.

And I get it the premise of your proposition. It makes so much sense. I’m the first to say that to become the person you want to be, you have to do the things that person would do. In this case, the logic follows that if you don’t want to have ED, you need to eat.

Except ED doesn’t concern itself with making sense. Any thought process that utilizes self-destruction as a protective mechanism is starting from a nonsensical point of origin.

You can’t reason with the unreasonable.

And eating does not process the trauma that crossed our survival/safety wires in the first place. At least not for me. I can only really speak for myself. This is my truth and my reality.

Most mental health professionals believe that ED is part of an “unconscious attempt to come to terms with unresolved conflicts or painful childhood experiences.” That sounds right to me, and it definitely was in my case.

And food itself cannot rewire my brain. Most of what we consider food isn’t even nourishing. It’s the opposite. It’s poison. But that’s a whole other article and I digress.

ED is a way to manage emotions. Food isn’t going to help that.

Getting to the Root Cause to Treat Eating DisordersEating disorders are rarely solely related to abnormal or disturbed…
www.nationaleatingdisorders.org
The healing comes first, the food comes second. Any eating that happens before the cognitive healing is done in the name of survival alone and on borrowed motivation from a third party. Until the emotional drivers of the disorder are managed, ED doesn’t care if you live or die…it just wants to mitigate the pain.

And we have to be honest that ED is a mental illness, at least as it’s defined in the DSM-5. A serious one. An incomparably deadly one. It’s the behavioral manifestation of a maladaptive coping mechanism that makes peoples’ lives unmanageable.

I have gained 20lbs in the last year, having re-entered recovery in February of 2018. In the last 2 months, I have substantially reduced my calories and lost 8 of those lbs, yet I am further in my recovery process than before. My BMI is exactly 18, and my body fat percentage is 13.4%. I’m also healthier than I was at higher weights because I have covered a lot of ground in processing my dysfunction and am now able to clean up my diet without fear of relapse. This weight is where I landed practicing healthy habits, and it’s okay that I’m still “skinny.”

Because recovery is not about calories or numbers on a scale.

You are correct that anyone who is eating only “enough” isn’t recovered. Conversely, nor is a person who begins to overeat now finds comfort in food, and gains rapidly beyond what is considered a healthy weight.

They just traded one shitty compensatory mechanism for another.

It’s an easy thing to do.

The trouble with saying that eating is the answer and that it will eventually get easier if you just do it long enough is that it sets ED individuals up for failure and, more importantly, it doesn’t deal with the underlying problem.

It wasn’t until I started being comfortable with occupying the space that my body takes up in the world did my brain begin to heal. The eating came second. The eating was only able to happen because my mind started healing first.

My anorexia is secondary to my primary dysfunction: making myself small.

It manifests both physically and cognitively. I sit in chairs with my limbs twisted in on themselves and actively work to stay out of other people’s way.

If I don’t talk, people can’t get mad at the things I say. If I don’t take up space, no one will demand that I move. I can’t be attacked if I am invisible. I can’t be criticized if I embody a physical frame that our culture reveres.

Bears aren’t going to attack me if I can’t even lift a stick to poke them.

Being tiny gives me control. As a teen, I was able to manipulate my mom, control my environment, and exploit the world’s moral obligation to protect the weak and vulnerable. It gives me sexual control. When men want me more than I want them, I have power over the ones I fear.

And there is no amount of calories I could stuff into my body that would reroute that faulty pseudo-protective wiring. I have to do intentional pruning of synapses and it continues as an ongoing process. I am still regularly shocked — if not daily, then weekly — when I discover previously unearthed ways that my desire to be small has manifested in all areas of my life.

In order to shut those down, I can’t just cut the ED weed off at the stalk. I have to dig out the roots. Until I get okay with taking up space in the world, regardless of how much I eat, my ED will not be healed and putting food in my mouth will not get any easier.

Sister, I commend your letter and your passion and your desire to help other people with ED. Sharing ideas and being vulnerable takes strength, which you seem to possess in spades. And if eating is/was the solution for you or people you know, that’s great. I have no authority to question what has worked for others.

I wish my ED were that simple, but the truth is that if I believe that eating is the fix, I won’t get better. I have to continually do painful work to acknowledge and process the genesis of my disorder — the need to make myself small — and understand the original trauma that caused it, to begin to heal.

Food was never going to fix my dysfunctional thinking.

Goddamnit, I wish it could.

Facebook27Tweet2PinEmailShares29
wpDiscuz
Share this ArticleLike this article? Email it to a friend!
Email sent!