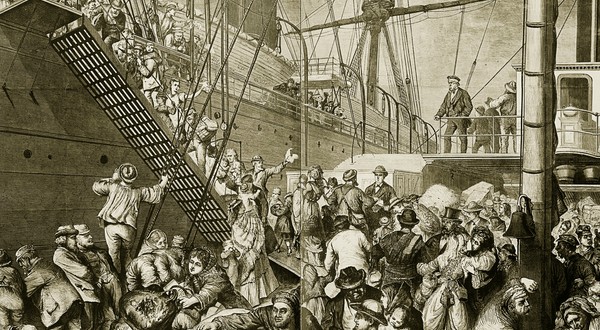 —
My great-grandfather’s excitement would have been palpable. Such a long journey, and now it was nearly over. He was almost there, just a few yards from entering the United States — his new country.

His heart would have been pounding in anticipation of what lay ahead: a new life of opportunity for him and the family he would send for as soon as he found work and saved a little money. Soon, the misery that had marked their existence back home would be only a faded memory.

But it was not to be. Not this time.

Not for Jacob Wise and his shipmates, all of whom were about to learn a lesson about the limitations of America’s promise as a land of fresh starts and boundless opportunity.

For as it turns out, Jacob’s boat arrived just a few days after the death of William McKinley, the nation’s 25th President, who had been shot eight days prior to that by Leon Czolgosz, the son of Eastern European immigrants. Immigrants, as it happens, from that exact part of Eastern Europe from which Jacob hailed. Caught up in a momentary wave of bigotry against those of his regional heritage, Jacob and the rest would be turned around at the port of entry, denied the right to disembark, and sent back.

Back to Russia whence they came. One can easily imagine that as the time ticked by, during the agonizingly slow return to the home he thought he had left for good, Jacob must have wondered if he would ever again get the chance to make right on his promises to his family.

He would of course, but it would take several more years. Six to be precise, until he could save up enough money to strike out again, hoping this time to make it past those who had seen themselves fit to exclude anyone who resembled, or sounded like, or were from the same part of the world as Jacob. To illegalize them, if only for a while.

And that, as much as anything, provides the most important answer to the question so commonly asked during the current immigration debate.

You know the question, voiced with such contempt by those who drip with disdain for the undocumented:

“What part of illegal do you not understand?”

As it turns out, I understand every part of it. I understand it all too well. Its meaning is inscribed on the cell memory of my ancestral line, burned into our familial DNA. For it is the label that was, for a while, placed upon my great grandfather. Not because of anything he had done, but merely because he had been born in a place that, in the eyes of those filled with hatred, rendered him suspect. After all, McKinley was killed by an anarchist whose parents were from modern-day Belarus, and so naturally, it made sense to treat a boat full of Minskers as though they were criminals.

Just like today, the occasional crime committed by an undocumented border-crosser from Mexico means we must crack down on others from there, deport as many as possible and prevent the entry of others with a fortified wall. We should, according to the president, view them all (or nearly all) as rapists and drug dealers and treat them accordingly.

What I also understand, even better than the meaning of “illegal,” is that racists are not very original.

The targets change, but the game remains the same: it is forever and always about stopping the dangerous and “polluting” other. It is about the dominant group telling those with less power that they are not as good, not as clean, not as moral, not as human in some way. It is about oppressing others in the name of protecting the self, failing to realize that in the end, the oppressor neither fully cows their target nor obtains the security they sought. Indeed they undermine it, along with any remaining pretense to the national greatness that made their own ancestors want to come here to begin with. The degree to which it is ironic is only exceeded by that to which it is pathetic.

And yes, I know, the voices that clamor for securing the borders insist they are not racists. But that’s because racist is not all they are. They are also liars. I suspect they insisted on their lack of prejudice a hundred years ago too, even as they were using bogus intelligence tests to “prove” that Jews and Italians were intellectually inferior to “real” white people. There was no bigotry. It was just that certain people were less assimilable, don’t you see?

Yes I see. I see very clearly, thank you.

The truth is, almost all anti-immigrant hysteria is about race, no matter how loudly and unconvincingly those persons pushing the agenda forward try and deny it.

The idea that folks merely want to crack down on those who enter the nation without proper documentation is demonstrably dishonest. After all, if it were merely a matter of wanting people to come the “right way” — legally — there would be an easy solution: just make legal entry much easier. We could streamline the endeavor and spend just a fraction of the money it would take to build a wall to hire folks who could process immigration applications in an expeditious manner, thereby removing the incentive to jump the so-called line.

But no one ever suggests this solution or anything remotely like it. And why? Because the issue really isn’t the distinction between documented and undocumented migrants; it’s about the fact that certain people simply aren’t wanted at all, and certain others feel qualified to make the fine distinctions between the welcomed and the damned. They have always deemed themselves capable of discerning who the better people were and who the lesser, and surely feel confident now that folks from Norway are preferable to those from Haiti, El Salvador or anywhere in Africa.

That so many now embrace this kind of thinking is a chilling testament, not merely to how racism works, but how memory itself can let us down and how forgetfulness has been elevated to the level of sacrament.

After all, when Donald Trump says Mexico “isn’t sending their best” and his minions roar with approval, the underlying presumption is that Europe, whence he and his cultists come, did.

But this is patently false: our ancestors, including my great-grandfather referenced above (and the other three-fourths of my family, which came to the colonies in waves between 150 and 300 years earlier), were all the losers of Europe. The winners never get on the boat. The winners stay put, probably because of all the winning. Funny how that works. But we pretend it isn’t so. As James Baldwin explained in 1963:

What passes for identity in America is a series of myths about one’s heroic ancestors. It’s astounding to me, for example, that so many people really seem to believe that the country was founded by a band of heroes who wanted to be free. That happens not to be true. What happened was that some people left Europe because they couldn’t stay there any longer and had to go someplace else to make it. They were hungry, they were poor, they were convicts.

See, black folks know how they got here, and the indigenous of this land are exceedingly clear as to the same. This includes, it should be noted, those Mexican folks, descended at least in part from the indigenous of the Americas who lived in what is now the southwest United States long before anyone ever thought of abandoning London and rebelling against the crown. It is we who are white who have forgotten whence we come and substituted convenient memories in the place of a more troubling history.

It is we who choose to ignore how we are bound to those newcomers of today: bound by a commonality of new beginnings, of desperation and terror and longing, however much we ignore it or seek to push it aside.

It is we who can glibly yawn or even applaud Donald Trump referring to the entire continent of Africa as a shithole — so too Haiti and El Salvador — and contrast these places unfavorably with the European nations whence we come, only because we apparently never read Dickens.

And because we seem to genuinely believe our ancestors came to this land from advanced functional democracies, with clean fingernails. We have superimposed a noble heritage upon a history of peasantry and poverty, and act as if the latter never happened.

We forget that we come from resistance cultures: people who resisted land enclosure, and persecution and enforced starvation at the hands of elites. We forget that our Irish ancestors were virtually enslaved by the Anglo elite, that our Anglo ancestors were marginalized by the same, that our Italian ancestors were disproportionately from Southern Italy and not even considered Italian by their brethren to the North. We are people who were shit on persistently by the elites in our home countries, and as a result, left. No differently than those doing the same today.

And yet rather than embracing solidarity with today’s marginalized as a result of that experience, we become the rationalizers, the deniers, the perpetrators of oppression. All in the name of an Americanism that many were once quick to deny us.

In our failure to understand our own history we build a wall between ourselves and current migrants that prevents us from acting on the basis of human compassion, the way most would if we could see ourselves in the other. Insofar as we treat newcomers like permanent outsiders, we diminish the value of our own ancestors’ sacrifices, we smash the concept of reciprocity into tiny pieces, and we demonstrate that we barely deserve the new beginnings they made for us, so eager are we to deny them to others.