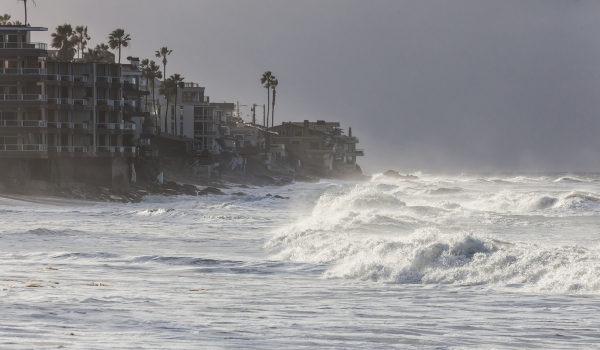 Europe’s politicians have more to worry about than the rising tide of populism. They will soon have to worry about the rising tide. European scientists have just warned that – unless there is a dramatic reduction in global emissions of greenhouse gases – the kind of massive coastal flooding that now occurs once a century could sooner or later happen every year.

This is the second such warning in weeks. German scientists recently calculated that while sea level rise would operate at different heights and different timescales, by 2100 it would impose colossal costs on 19 European cities chosen for their case study.

Now a second team of researchers has used different methodologies to warn of broadly the same hazard. Even if the world acts, and greenhouse gas emissions peak at 2040, extreme sea levels driven by major storms could peak by 57cms on average by the end of the century, and do so every few years.

“Unless we take different protection measures, 5 million people will be exposed to coastal flooding on an annual basis”

If the world continues with its business-as-usual combustion of fossil fuels, North Sea extreme tides could reach almost a metre, and Mediterranean and Black Sea levels could reach such extremes several times a year.

“Unless we take different protection measures, 5 million people will be exposed to coastal flooding on an annual basis,” said Michalis Vousdoukas, a coastal oceanographer with the European Commission’s Joint Research Centre, who led the study, published in the journal Earth’s Future, published by the American Geophysical Union.

Sea levels have been creeping up for the past 50 years, as glaciers retreat and icecaps melt, and as oceans expand with increasing atmospheric temperatures. But Europe, bounded by the Baltic Sea, the North Atlantic, the Mediterranean and the Black Seas, has always lived with some kind of marine hazard: the dangers lie now not in the events, but in their increasing frequency.

And for those millions in the low-lying coastal cities – Rotterdam on the North Sea coast, Venice in the Adriatic, Piraeus in the Aegean and Istanbul on the Bosphorus – the hazard could increase a hundredfold.

The researchers looked at mean sea levels, tides, wave energy, storm surge and all the other factors likely to be affected by climate change, to reckon that, without concerted international action to reduce greenhouse emissions, extreme sea levels along the European coasts could reach 81cms on average by 2100.

Serious threat
And even if all the world’s nations do fulfil the pledges made in Paris in 2015, these extreme sea levels could reach 57cms by the century’s end.

By 2050, the once-a-century extreme rises could be happening every 10 or 11 years. By 2100, under the worst-case scenarios, these could happen between every three years and every year.

The projected rise in extreme sea levels, the scientists conclude, “constitutes a serious threat to European coastal societies. Their safety and resilience depends on the effectiveness of natural and man-made coastal flood protection, i.e. the capacity of the coastal zone to act as a buffer and absorb ocean energy through complex wave shoaling and breaking processes.

“Taking into account flood protection standards in place and uncertainty in their probability of failure, around 5 million people could potentially be affected.” – Climate News Network