Get Daily Email
Join/Login CLOSE
Home / Featured Content / “Excuse Me, Ma’am. Has Anyone Ever Told You That You Look Like Mick Jagger?” 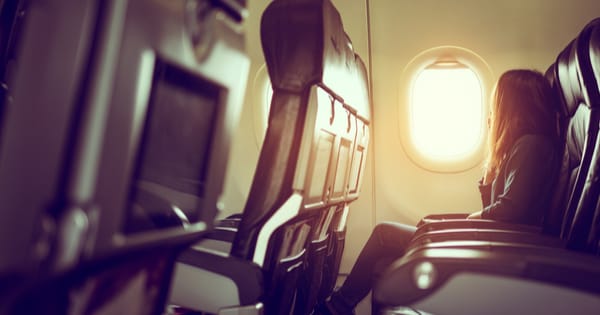 I can’t say that I’ve ever really enjoyed flying. There’s something about being locked in a metal tube, 40,000 ft above solid ground, with more strangers than they would allow in that same confined space down on the earth, said tube being flown by a person I have not vetted for either skill or temperament, with negative four inches of legroom to accommodate my 6’1″ frame, for anywhere from two to six hours — that I find both uncomfortable and unsettling.

It’s not anything that a little Xanax can’t help, though.

So it was just me and Lil’ Xanny (not the delinquent, face-tattooed, rapper child) chillin’ on the jetway, waiting to board my flight home from a lovely long weekend with my siblings.

The line had been at a standstill for about, oh, five minutes — probably due to some ‘feces on a chair’ incident. Or maybe there was an inebriated man stopping to do pull-ups on the overhead compartment bin on his way to his seat— when I noticed the gentleman in front of me repeatedly turning around to look at me.

But not directly. It was like when your friend tells you not to look at someone but you do anyway, and then that someone catches you looking at them and you get embarrassed and you pretend to be looking at something else before you turn back around really quickly?

This wasn’t necessarily a new thing for me. I’m a tall chick and get more than my share of side eye. Like I mentioned before, in bare feet I’m 6’1″ so, with the heeled boots I was wearing that day, it was a real Brienne of Tarth situation.

Plus, I mean, let’s be honest…I was looking pretty cute right then. I mean, my hair was enjoying the increased local humidity and felt extra bouncy and shiny. My skin was aglow, having just spent the weekend basking in the love of my people.
I figured it was some combo of the height and the boots and just feeling myself that day. It was all good.

So when the look-er leaned over to his friend and whispered and the friend proceeded to turn around and look at me, too, I intentionally caught his eye and smiled. What are you gonna do? They seemed like nice guys and we were trapped in a confined aluminum hallway together. So I engaged the apparently interested gentlemen in polite conversation.

We proceeded with the customary introductions and were soon caught up in riveting discourse about the friend’s grandmother whom he was going to visit in Scottsdale and what the hell are those saguaro cactuses all about? The look-er stayed relatively quiet, contributing appropriate, “yeah”s and nods here and there.

That is, until he didn’t. He waited for a pause in the convo and finally spoke in a loud and determined baritone,

“Excuse me, ma’am. Has anyone ever told you that you look like Mick Jagger?”
If I had been drinking (which, in retrospect, I wish I had been) I would’ve spit my whiskey sour right out. On the floor, on the wall, on the look-er …

I did not see that one coming.

There are times in your life when you feel like you are watching yourself from the outside; when your reaction is so on point and perfectly crafted that it defies what you thought yourself capable of. The world stands still and you feel like your whole life has been building toward that one moment in time.

This was not one of those moments.
AJ’s Inner Voice:

Look-er’s Much Louder Voice: “Well, you do.”

AJ’s Actual Voice: “I honestly don’t know what to do with that, man.”

His friend was long gone by that moment — not in body, but in spirit. Back turned to me, he was side glaring at his friend like, “W in the holy F was that, dude???”

(This leads me to believe that the man did not have Tourette’s Syndrome or some other condition which causes involuntary verbal outbursts. He simply committed a really unfortunate party foul.)

My friend, Lil’ Xanny, had bailed, too. Turns out, being a late 30’s woman publically compared to an 80-year old rock legend whom, let’s be frank, has been around the block more than a few times, has a real buzzkill effect on perfectly good benzos.

In fact, it might as well have been just me and look-er man alone on the jetway in some weird, verbal iteration of that one Matrix scene with the words “Mick Jagger” tracking toward my face in slow motion and me trying to do a back bend and dodge, because anyone within earshot had turned their back in equal parts horror and shame.

It was kind of like when you’re watching an embarrassing scene on TV and you have to either look away or skip ahead because it’s just too embarrassing? And you actually feel embarrassed for the character?

They all felt like that. It was stone cold silent — like we were in the tomb of my dignity.

Except no one could skip ahead because this, my friends, was real life and the onlookers were forced to physically recoil when they heard a very normal appearing man compare a perfectly polite woman to a 75-year-old rock star in open conversation.

No one would make eye contact with anyone else. Everyone wished they were somewhere else.

It was not the best.

And then it was just me standing there by myself, because the look-er turned his back, too.

Me, being of the good-natured Midwestern persuasion, laughed with feigned confidence and smiled sheepishly, more worried about bringing the people around me back from their personal hellscapes of awkwardness, than I was about my own wounded ego.

It was exactly that moment that the line started moving again and they had us in our seats within minutes.

And thank sweet little baby Jesus for that.

Found my seat. Buckled in. Ready to file that one under, “WTF.”

Oh no, my friends, it wasn’t over yet. People had started taking little glances at me, looking for the resemblance. They’d catch my eye and immediately look away. It was so fucking awkward and hilarious.

We ended up sitting on the runway for another 90 minutes because, well, Frontier Airlines, and after one gentleman took the initiative to lean over and reassure me that I do not look like Mick Jagger, what else was there for me to do except spend the next hour and a half of my life Google image searching Mick Jagger and copying then into side-by-side collages of myself in different poses and at different ages while texting my siblings?

How spectacularly bizarre does a conversation have to be for a stranger to feel like they are morally obligated to step in and save a poor woman from the notion that she looks like Mick Jagger?

I texted my brothers and sisters to gauge their reaction.

My sister’s was hilarious: 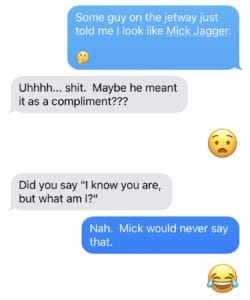 Sure. I can see the complement angle. Any relatively young woman would be flattered to be compared to a septuagenarian man.

My mom was delightfully mom-ish: 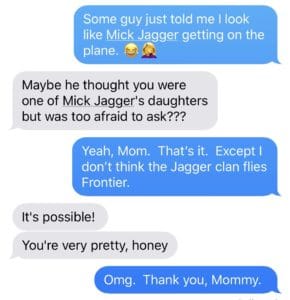 Yeah, maybe, Mom. Except that I’m pretty sure that Georgia Jagger would be in boarding group A, not C, for her economy class, Cleveland-to-Phoenix flight on a Tuesday morning.

Also, we can’t selectively ignore the fact that he said I look like the man himself, not his ethereal progeny.

Notice that no one in my family directly disputed the’s man’s assertion. It was as if someone had finally let the cat out of the bag. 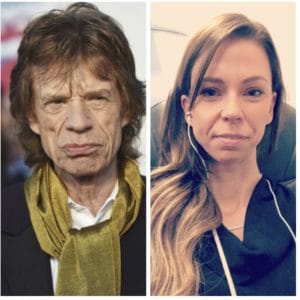 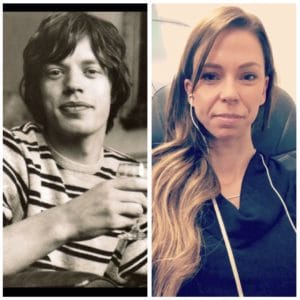 Turns out, I learned something new that day, as I was racking up Framatic in-app purchases: I do actually resemble Mick Jagger. If not now, then definitely 50 years ago.

The moral of the story is this: If you meet a woman on an airplane (or anywhere, really) whom you feel resembles any member of The Rolling Stones, she’d probably appreciate it if you keep it to yourself and just tell her you like her boots instead. You’ll spare yourself, your fellow flyers, the woman (and her Xanax) some pretty intense awkwardness and you can freely regale your friends with the tale of the uncanny resemblance when you get home.

She, like me, probably doesn’t need to know and it’s unlikely she’ll think the whole thing is as funny as I do.