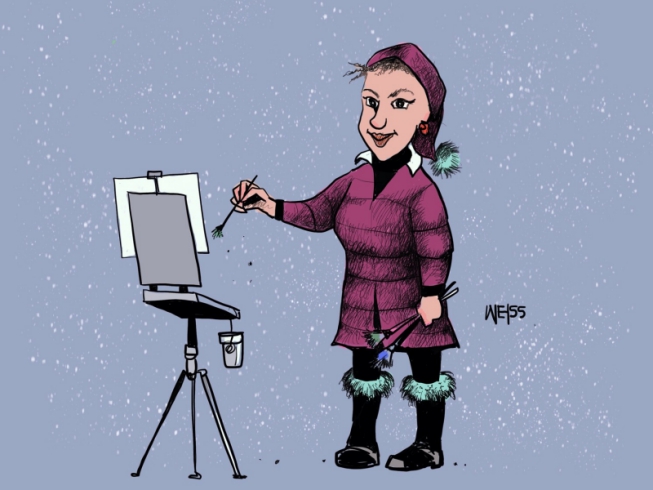 Carol dropped Timothy off at the daycare and headed to work. Being a dental hygienist was not her idea of a life long career, but it paid the bills and ensured independence for her and Timothy.

At five years old, Timothy was too young to understand divorce. All he knew was that Daddy visited every other weekend and Mommy was his rock. Whenever nightmares came, Mommy was there to soothe him back to sleep. When he was hungry, Mommy had a special way of making pancakes or chicken nuggets. His favourite comfort food.

Carol dated periodically, but her true passion was painting. She studied landscape painting at community college and managed to take a few workshops. The rhythms of work and parenting consumed most of her time, but there were golden windows of creativity. Holidays and weekends off, when Timothy was in daycare and she could immerse herself in her art.

Be a Good Steward of Your Gifts

Many evenings, when Timothy was asleep and the pace of life slowed, Carol would brew a cup of soothing tea and settle into some reading. Her favourite poet was Jane Kenyon and her collection of essays, “A Hundred White Daffodils.”

Jane Kenyon was a poet and an American translator. Her work was simple, spare and emotionally resonant. She penned poems of rural images, haylofts bathed in sunlight and shorn winter fields. She wrestled with bouts of depression and “having it out with melancholy.” For some reason, Carol identified with Jane Kenyon. Kenyon had her struggles, just like Carol, but somehow she conjured beauty through her poetry. 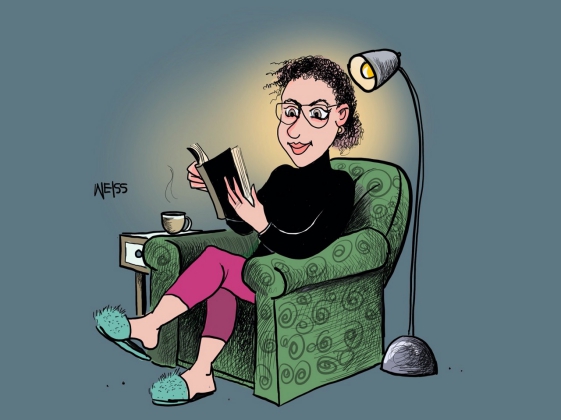 “Be a good steward of your gifts. Protect your time. Feed your inner life. Avoid too much noise. Read good books, have good sentences in your ears. Be by yourself as often as you can. Walk. Take the phone off the hook. Work regular hours.”

Carol knew that Kenyon’s advice was primarily for writers, but it held value for painters as well. Yes, Carol had a day job as a dental hygienist, as well as her responsibilities as a mother. But there were slivers of time that demanded Carol’s attention. Slivers of time to hone her craft as a representational painter. She needed to be a “good steward” of her gifts.

Carol loved good music and serendipitously discovered the recordings of actor and musician Hugh Laurie. She enjoyed listening to his piano compositions and found inspiration in his music as she painted.

Once she researched Hugh Laurie and found this quote of his:

It’s a terrible thing, I think, in life to wait until you’re ready. I have this feeling now that actually no one is ever ready to do anything. There’s almost no such thing as ready. There’s only now. And you may as well do it now. I mean, I say that confidently as if I’m about to go bungee jumping or something — I’m not. I’m not a crazed risk taker. But I do think that generally speaking, now is as good a time as any. 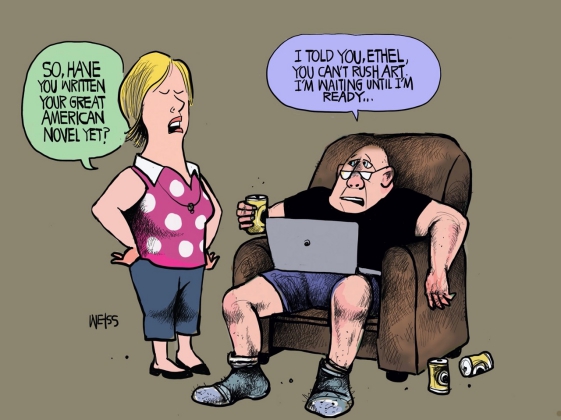 Hugh Laurie inspired Carol to put up a website of her paintings. It was scary and exhilarating and fun. She photographed her best work and signed up with a wonderful on-line art website service to promote her art. But when she uploaded her work to the world, the response was largely crickets. She loved painting, but clearly, her work needed refinement.

Time passed and despite her best efforts, Carol’s work sold irregularly. She dreamed of becoming a successful artist and leaving her day job as a dental hygienist. But try as she might to vary her artistic approach, she seemed incapable of growing her collector base. So she focused on raising Timothy and painted along the margins of her schedule.

Wikipedia describes the origins of Goodwill Industries as follows:

In 1902, Reverend Edgar J. Helms of Morgan Methodist Chapel in Boston, started Goodwill as part of his ministry. Helms and his congregation collected used household goods and clothing being discarded in wealthier areas of the city, then trained and hired the unemployed or bereft to mend and repair them. The products were then redistributed to those in need or were given to the needy people who helped repair them.

Carol liked the mission and work of the Goodwill and often shopped there because so many of their products were affordable. And so much of the Goodwill’s mission focused on mending the broken souls in society. 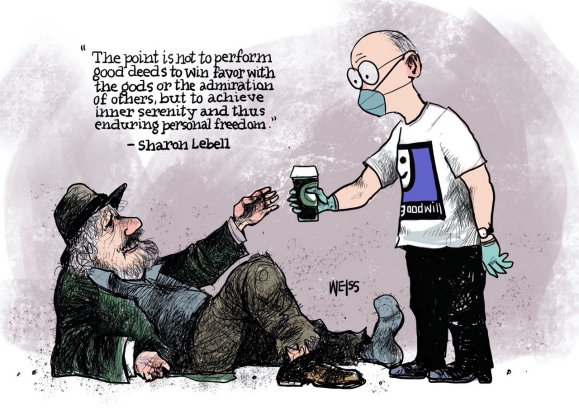 One weekend, when Timothy was on a playdate, Carol spent some time at the local Goodwill store, exploring deals and products. She came upon a lovely little tonal painting of a quiet mountain scene. The work was more restrained than her own landscapes. Simple, subdued and yet bursting with vitality and character.

On a whim, she decided to buy the piece and hang it in her apartment studio. The elegant signature “Delgado” was unfamiliar to her, but she liked the piece none the less.

Light at the End of the Tunnel

The years passed and Carol quietly raised Timothy into a fine young man. He had an affinity for computer science and after college secured a promising position as an engineer with Google.

Timothy found a lovely condo and his career was progressing nicely. Carol couldn’t help but feel a sense of pride and accomplishment. Her years as a dental hygienist made it possible to pay for Timothy’s education. Timothy’s father contributed little, which only added to Carol’s sense of accomplishment in raising him.

One day Timothy phoned Carol and confided that he had struggled somewhat for the past year at work. Fortunately, despite a few difficult quarters, he had prevailed and done well professionally. In fact, he was on the cusp of a significant promotion. 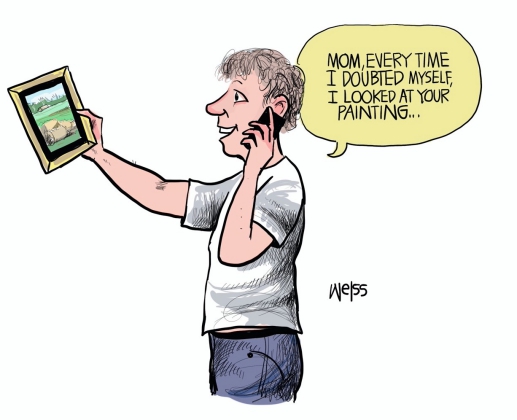 He mentioned a small painting of hers that hung in his apartment. “Mom, every time I doubted myself, I looked at your painting. The one of the haystacks in sunlight. I don’t know why, but every time I looked at it, I felt a sense of hope. Kinda like a light at the end of the tunnel. And you know what, it helped me get through this year. It’s what led to my promotion.”

His words meant so much to her. The idea that her artwork inspired him to succeed. Perhaps she had not attained fame and fortune with her art. But at least it helped her son find greater success. At least it was his “light at the end of the tunnel.” Still, she was frustrated by the sense that she failed as an artist. That her lack of commercial success meant her art was insignificant and pedestrian.

The True Measure of a Life

Carol’s cat “Winston” was an inquisitive soul. Unfortunately, his curious nature often led to mishaps. So it was one Saturday evening when Winston was pawing the small painting above the bookcase. 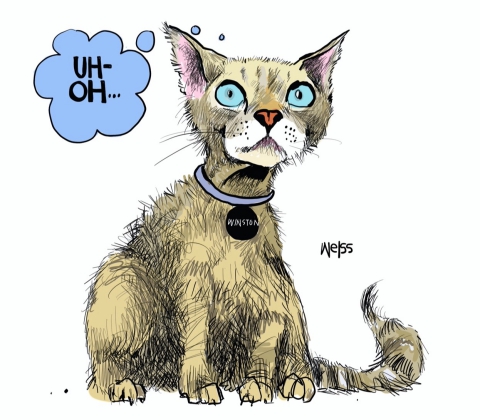 Carol heard a crash and ran into the living room. Winston stared at her, frozen atop the bookcase. There on the floor was the small tonal painting by Delgado. The one she plucked from obscurity at the Goodwill. As she picked it up, she noticed that the backside paper was torn. And much to her surprise, within the paper was a small envelope.

Carol slipped out the envelope and opened it, finding a letter within. She unfolded the letter, revealing a beautiful copperplate cursive. Carrying the letter into the lamplight, she read. And this is what the letter said:

This Much I Know is True

The world is awash in opinions. Online gurus and self-help authors dispense formulas and directives on how others should live. The problem is that no two people are exactly alike. What might work for some may not work for others. Carol understood this, and yet Alphonse Delgado’s heartfelt wisdom struck a deep chord in her. 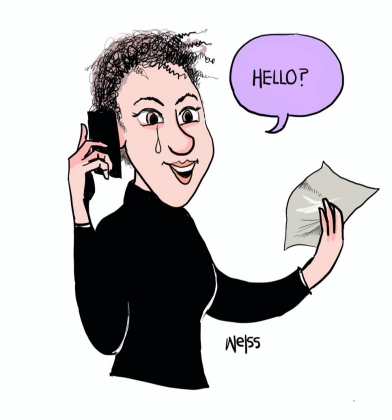 Carol held the letter in her hands, her eyes misty with a sort of emotional resonance when she was startled by the phone ringing. She answered, “Hello?”

“Hi Mom,” said Timothy, “You know that girl at work I told you about? Nicole? Well, you won’t believe this. She’s an artist. An oil painter just like you. We’ve been dating for six months now. She could be the one.”

“Mom, she was looking at your painting last night. The one of the haystacks. She said it reminds her of her grandfather’s art. He was a real estate broker by day and painter by night. She told me he used to say, ‘So much of life is uncertain and hard. But this much I know is true: Art is the best of us. Art reveals our souls. Our deepest truths. It need not fetch fame or fortune to be true and authentic.’ Isn’t that wonderful, Mom?”

“Why yes, son, that’s beautiful. Nicole’s grandfather sounds like a wise man. What is his name?” 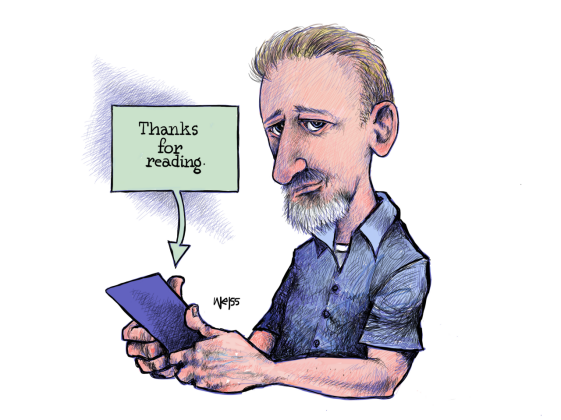 I’m John P. Weiss. I draw cartoons, paint, and write about life. Get on my free email list here for the latest artwork and essays.

This post was previously published on Mind Cafe and is republished here with permission from the author.
—

Facebook6Tweet2PinEmail1Shares9
wpDiscuz
0
0
Would love your thoughts, please comment.x
()
x
| Reply
Share this ArticleLike this article? Email it to a friend!
Email sent!