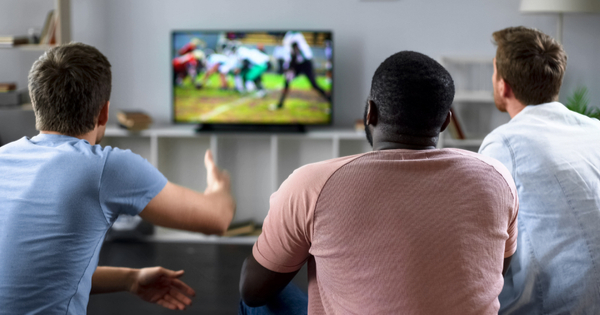 Sundays are over, man.

The only way it’s possible that you wouldn’t know professional football is back on television is if you are a small woodland creature and your mobile minutes are up. Even then there’s a good chance you would still find out it’s back on. Sunday’s over the summer are nice days to hang outside, maybe hit the beach, go for a nice family bike ride, or spend some time at a state park. But that’s over. It’s probably too cold out anyway and that cloud over there looks dark and it’s probably going to rain so we should all stay inside. Fire up the excuses to become another throw pillow, football is on and America isn’t going anywhere.

It starts off easy enough really. A few preseason quarters and then a Thursday game to whet the whistle. Then Sunday at 1pm there’s the local game on. Great excuse to see how the team looks this year.

But then at 4 the nationally televised game is on and that’s a good indicator of who the league thinks is going to go the distance so it makes sense to watch that, too. Plus, you might need to fire up a fantasy trade. By then it’s almost 8pm and why bother doing anything else because that Sunday night game is just around the corner. Suddenly you’ve been sitting for ten hours straight. But what did you consume besides a few dozen beers and all of the nachos?

According to a Wall Street Journal study, you will consume mostly commercials. Each game is just over three hours long and during that time there is only about eleven minutes of football action and about seventeen minutes of official review. The rest of the time is talking heads and commercials. That’s about two and a half hours of commercials per game.

If you watch all three Sunday games, the Thursday game, and of course Monday night, you will have consumed about twelve plus hours of commercials in a single week. Not to mention the overabundance of slow-motion shots while under official review. With changes in the rules this season this time is likely to increase.

Games have lasted longer and longer over the past decade. Likely due to more review but it helps with the money. The NFL makes gobs of money on those commercial slots being filled. Increase the length of the game by a few minutes and you add commercial time. Times that need to be filled according to the network contracts. So advertisers and sales reps get together and figure out best to spend their money to get you to spend yours.

Sundays are over, man. Spend five days working to spend Saturday getting all of the chores done so Sunday can be crammed full of consumerism, commercials, and official review. Then there’s the small amount of sports that are actually consumed in there as well, let’s not forget that part. The actual sports part is framed neatly in between the human interest stories of how different star players got to where they were and what they’ve done since. Those, by the way, are decided by coaches, team captains, and network producers in meetings on Saturdays before the game. Those production meetings are important for game flow, camera work, and time fillers.

Now that Sundays are over until Super Bowl, maybe Saturday can be the new Sunday. That is, of course, if you aren’t a college football fan.