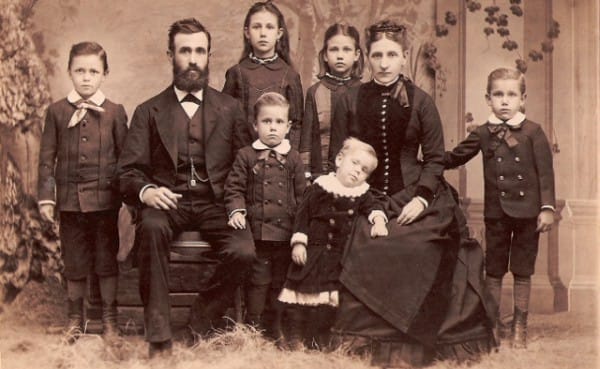 Johann Carl Müller or John Charles Mueller is my paternal great-grandfather. The fifth of eight children born to Johann Heinrich Müller and Susanna Gertrude Wenzel, I believe he was the first of their children to immigrate to the United States.

Johann Carl, or John Charles in most of the English records we have for him, always seemed the most important person in my father’s genealogy work. My dad, Harold Mueller, never met J. C., as he became known. Dad was born in 1920, some twenty-six years after J. C. died of stomach cancer, and so never knew his paternal grandfather. As far as I can tell, Dad never knew his maternal grandparents at all. He eventually located some information on Louisa Schirmer’s parents, but I don’t think he ever met them.

As it turns out, that’s become something of a streak in the Mueller family. Dad never knew his grandparents. My brother and I never knew either of our grandfathers; they both died well before our parents married. Gran, my dad’s mother, died when I was six, so I have no real memory of her. Nan, my mother’s mother, died when I was fifteen, but I didn’t know her well when I was younger, and by the time I was old enough to really appreciate her, dementia had begun its horrid attack on her mind. My dad died barely two months after Diana and I married, and so he never met any of his eight grandchildren. My mother died just a few months after Adam was born, so she only knew three of the eight. I seem to be breaking the streak though. I’ve already met three grandchildren, and I’m young enough and sort of healthy enough that I could possibly meet a great-grandchild if I’m extremely lucky. I’m not in a hurry for that though.

Much of what I know of J. C. comes from my dad’s work. J. C. was born in 1847 in Ober-Ingelheim, Germany, then part of Hesse-Darmstadt, or the People’s State of Hesse. His parents had seven other children, and as far as I’ve been able to determine, only two others came to the US. His older brother Philip married in Manhattan in 1874, and there is family history that younger brother August worked on the Travis County (Tx.) courthouse.

Dad could never clearly establish J. C.’s immigration information. Family legend held that J. C. and his wife Louisa Friederike Wilhelmine Schirmer both arrived (separately) in the US in 1867, and married in Coxsackie, New York, in 1872. It seems like a plausible story, but there was no supporting information at all. An 1883 fire destroyed town and village records, according to a professional genealogist my father hired. She searched church and newspaper records as well and finally came to the conclusion that they’d been married by a justice of the peace whose personal records didn’t survive.

He may have been living in Manchester, New Hampshire when he filed his declaration to immigrate because that was filed in the Hillsborough Superior Judicial Court in 1869. That was filed about a year after he arrived aboard the S/S Westphalia. His declaration stated he arrived in August 1867, although the Westphalia’s maiden voyage was in August 1868.

I also eventually located his actual naturalization papers. His hearing was held in New York City, and he states there that he was living in Coxsackie, working as a farmer. At this point, there’s more to suggest J. C. and Louisa were indeed married there than that they weren’t. It’d be nice to find something concrete, but I think at this point all we can come up with is lots of circumstantial evidence.

By August of 1875, the couple was living in Oak Hill, outside of Austin, Texas, based on the birth of their first daughter Philippine.

Neither J. C. nor Louisa appears in the 1870 US Census, although as my father put it, “It seems it would be impossible for them to be completely omitted from any record. Yet, on the other hand, as newly-arrived German immigrants passing through, who would have taken note of them?”

How and when J. C. Mueller and Louise Schirmer came to this country, how they met, why they chose Coxsackie to be married, and why they selected Austin or Travis County as a place to live all remain unanswered questions. During my childhood there were at least several occasions when the reason for J. C. Mueller’s coming to this country was given as his desire to avoid military service. The Franco-Prussian War of 1870, other conflicts of the 1860’s, and the possibility of his conscription into military service may have had a direct bearing on his coming to this country.

J. C. worked as a farmer in New York, and there are several land purchases around Austin in his first years there. By 1885, he was listed in the Austin City Directory as the proprietor of a “Feed, Hay, and Grain” store at 322 E. Pecan, which is now known as E. Sixth Street. Also in that year, J. C. bought land on Manor Road and built a house. The family remained there until 1905 or so, when they moved to the 500 block of E Sixteenth. That house was later razed for an Austin city renewal project in the early 70s, after Leona Mueller’s (“Gran”) death.

My great-grandfather signed his will as “J. C. Mueller” in his signature. His last will was drawn on April 26, 1894, barely two days before his death. The obituary said he died of “bowel trouble;” an email from the Austin City Cemetery office said the burial record showed stomach cancer.

Section 7 of my father’s work, “The J. C. Mueller Family,” titled “Early Years In Austin” covers more of what my father learned about his grandfather.

I’ve already established J. C. Mueller’s immigration and naturalization information, which had been the biggest mystery for me. I’d like to learn more about his time in New York, and see if I can find any information about him in any city directories in the region. I will also be searching for evidence of the trip he might have taken after he got his passport. His 1889 passport application suggested he’d be traveling within six months, but my dad apparently never found any information about that trip, nor have I.

If you’re related to John Charles Mueller, please contact me. There are several descendants working on filling in the details of his family, and we’d love to collaborate on the work. You can use the Contact form here, or the Suggest tab on his page at my genealogy site.

My great-grandparents with their children. My grandfather Robert is on the far right.