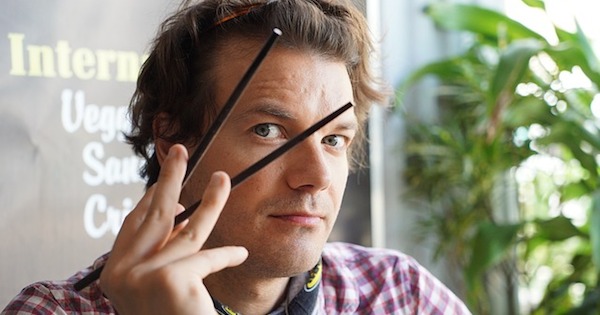 The Kinks were right: It’s a mixed-up, muddled-up, shook-up world.

A recent study out of the U.K. is just the latest example. It found that men across the pond are afraid to choose a vegetarian dish when they’re dining out for fear of being ridiculed.

You can’t make this stuff up. After spending a year on their project, scientists at the University of Southampton concluded that the lads experienced “social isolation” when they told their mates that they’d cut back on meat.

Lord knows what fresh hell it must be for vegans who spill the figurative beans.

There’s no lab coat in my closet, but my conclusion is that some guys aren’t keen on ordering that hearty kale salad in front of their meat-eating chums because they might be seen as less “manly,” whatever that means.

Which brings me back to The Kinks. In the interests of circumventing the muddle, let’s be clear: Going vegan is one of the manliest things that a guy can do.

We know that eating meat is no boon to our health. It leads to cardiovascular disease, strokes, obesity, diabetes and colorectal cancer and increases the risk of Alzheimer’s. Three years ago, the World Health Organization classified processed meat as a carcinogen. Chew on that the next time you think about having a hot dog, ham sandwich or side of bacon.

We know that meat is bad for the planet, too. In fact, animal agriculture accounts for some 18 percent of greenhouse-gas emissions. In case you missed the UN’s recent warning about climate change, we’ll be in deep you-know-what by 2030 if something isn’t done soon. Which reminds me: Meat production also generates billions of pounds of manure that ends up in lakes, rivers and our drinking water. And every minute, seven football fields’ worth of land is bulldozed to create more room for farmed animals and the crops they eat.

And we know that eating meat is murder on animals. Billions of chickens, pigs, cows and other gentle, intelligent beings spend their lives crammed into putrid warehouses, confined to crates so small that they can’t even turn around or crowded into dusty, barren feedlots. They’re mutilated, their babies are torn away from them and they’re slaughtered in ways that will keep you up at night.

What does a guy do when he sees something wrong, something that wrecks his health, poisons the environment and condemns animals—who, like him, experience fear and pain and only want to live in peace—to a life of misery and a horrific death?

He doesn’t say, “That’s not my problem.”

In 2013, strongman Patrik Baboumian broke the world record for the most weight ever carried by a human being, lugging 1,216 pounds on his shoulders across 10 meters. That’s like giving a large horse a piggyback ride. In 2011, the weightlifting record holder was named Germany’s Strongest Man.

Are you going to tell those guys that they aren’t manly?

Good luck with that.

Here’s a better idea: Get with the program.

Just ask my wife—taking care of yourself, helping ensure a greener tomorrow and showing compassion for every living being is as manly as it gets.