KIDROBOT headquartered in Broomfield, CO, is acknowledged worldwide as the premier creator and dealer of limited edition art toys, signature apparel and lifestyle accessories.  I had the unique pleasure to interview the creative talent behind my favorite DUNNY figures KIDROBOT Creative Director and Graphic Artist Frank Kozik. (Kozik created Smorkin’ Labbit!) Although primarily known for his Alt-Rock Posters and screen prints,(a rare painting of the Labbit sold on the TV blind auction show Four Rooms for £4,000.) He is also a member of the Stuckism art movement. 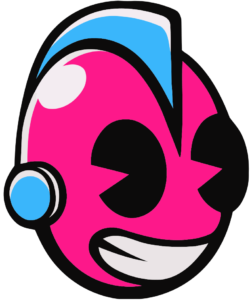 We do both licensed and art toys and what I’m pushing for is the sweet spot where we can merge the two. We can do an interesting license like the Care Bears with an artist, we’ve got HELLO KITTY stuff coming out that way, we’ve done some DC [COMICS] stuff we’ve done that way. I think that’s great because it’s accessible to a lot of people. Collectors like it but people who usually collect “normal” action figures get turned on by a different version and they get into the artists so there’s this crossover action going on. -Kid Robot Creative Director Frank Kozik

Kozik has been described as “one of the rock world’s top poster artists”, and interviewed in Rolling Stone. He has worked with Nirvana, Pearl Jam, Soundgarden, Stone Temple Pilots, the Red Hot Chili Peppers, Melvins, The Offspring and Butthole Surfers. Kozik used to run Man’s Ruin Records, a media outlet and record label, and has published several books including Man’s Ruin: Posters and Art by Frank Kozik, and Desperate Measures Empty Pleasures.*

Kozik has been a force in the designer toy movement with many of his works produced in that form, he’s been Creative Director of KIDROBOT since thier restructuring three years ago.

We spoke primarily about KIDROBOT’S past, ( My very first KIDROBOT collectible was the ULTRAMAN figure I bought in their NYC SOHO store) and what they have in store for the future. The Customization Scene and how he draws talent from there and Frank’s desire to recruit female talent.

Customizing DUNNY figures and other collectables are a HUGE trend Frank embraces and enjoys. KIDROBOT continues to tap talented amature creators to enrich thier pool of designers.

“What’s nice about the custom scene is it allows someone who can’t make a production toy yet to actually do thier own take on a platform. I think it’s a really vital part of the scene because it shows that many people who are into this stuff aren’t just takers, they’re also givers.”

Frank went on to tell me he had ten new pieces produced by new artists who have never released a toy before, that he recruited from the customizing world. KIDROBOT actively encourages diversity and the company has a long policy that promotes talented street artists, feature their work and have their unique voices be heard.

You’re going to see a lot more ‘90s anime licensed products less superheroes. And on the art tip, we have been working with a stable of artist both new and known. You’ll see mixed mini series to introduce new artists” – KIDROBOT Creative Director Frank Kozik

“They start collecting something and it’s gets them enthused about the format so they want to make thier own versions. I think it’s a very interesting cycle. I pay a lot of attention to the customizing world, a lot for our new artist have proven themselves that they can do some really interesting things with these objects in three dimentions .”

The toy business, like all innovative businesses that want to remain current, understand thier responsibility to look for diverse voices and hire diverse creative talent to better reflect thier customers, set trends and grow their marketshare. KIDROBOT under Frank’s creative direction is very interested and been proactively hiring and promoting women artists. Frank spoke quite passionately about it.

I’m looking for color and story and positive energy in our releases. We’re looking at some new artists, they’re not so much from the toy scene, but they’re graphic artists that are a little bit better known, with really bright and colorful simplistic imagery that has a positive social aspect to it.- Frank Kozik

Frank spoke about what was the “sweet spot” for him creatively when working with licensors who sometimes are very conservative in how they want their licensed characters and properties portrayed. For example, Brandt Peters Harley Quinn figure (pictured) which brilliantly captures the manic spirt of the DC character while allowing the artist to playfully envision Harley as a cute but dangerous marionette, with no strings attached!

“What I’ve been doing at KIDROBOT, I’ve been here three years now full time, is to break down some of the boundaries and bring back some of the playful, colorful aspects back.”

Frank indulged me as I waxed nostalgically about the KIDROBOT SOHO store in the ‘80’s-‘90’s when anime “Chibi” style characters were all the rage. He spoke about the influence of street art and of Asian artists on the toy scene currently.-

“There is a whole new generation of street artists guys [and girls] out of the Philippines,Thailand & South East Asia. These guys all started out as muralists and now they are getting into the designer toy business. We’re picking up some of those guys too because they kinda have that early ‘90’s vibe, but a new version of it, with a lot of Asian Mythologies and stories mixed in with it. So it’s a really cool mix! You’re gonna to see some of that coming out in the next couple of years guys like RUCKET & QUICK, we’re picking them up and doing them in vinyl!” 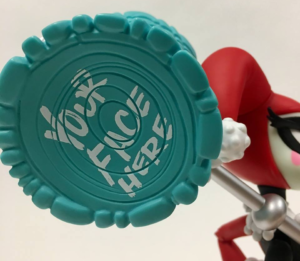 My take away is KIDROBOT continues their commitment to continue making quality toys and collectibles while putting as much “Art” as they can into their designs, bringing their creativity to a broader audience, as Frank relayed to me in the second video-

“We’re trying to reach a larger audience we are getting pure art toys into HOT TOPIC. Like the Archane Divination One Series it’s all Dunnys, it’s all artists it’s not “commercial” but HOT TOPIC is carrying it. For me that’s mission accomplished. If you live in a big city or a college town you have access to stuff, but there are bunch of people living in the middle of Iowa that don’t have access to the specialty [toy] scenes like we do in the Cities, but there’s a HOT TOPIC in their town. They can get turned on to something that’s kinda happening, you know what im saying? In real-life, not just looking at it online but being able to interact with it.” 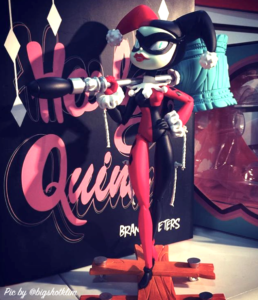 Pushing the artists, pushing interesting stuff into the mainstream is my big pushing action- Frank Kozik

My search at All Things Geek has always been for companies, licenses and products that are innovative, encourage diversity & inclusivity and just plain fun! KIDROBOT checks all those  boxes for me! I thank Frank Kozik for taking the time to talk with me about KIDROBOT. I will have further individual reviews of actual products once they’ve been made available to me by the manufacturer for editorial review purposes closer to release, so stay tuned!

In the meanwhile, if you are interested in checking out what products KIDROBOT has to offer currently, check out thier website – https://www.kidrobot.com
—

Facebook30TweetPinEmailShares30
wpDiscuz
0
0
Would love your thoughts, please comment.x
()
x
| Reply
Share this ArticleLike this article? Email it to a friend!
Email sent!