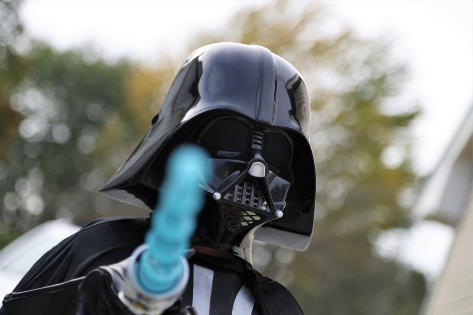 Everywhere we turn, we are faced with a representation of a man falling in love and becoming a better version of himself for it. Despite this apparent growth, we still manage to immaculate men bitten by the love bug. They are teased by their male friends, patronized by their female friends and the change they undergo while securing their conquest is diminished by the suggestion that they have lost their edge and have become domesticated. Even in our modern, sexually progressive society, we teach our children that love is an empowering force for women, yet, a weakening and destructive force on men. Blatant examples of this can be found in popular film and literature.

An iconic example of this paradigm can be seen in the “Star Wars” franchise. In the prequels, a young boy, Anakin Skywalker, is saved from slavery and given the opportunity to be trained as a Jedi. Anakin shows incredible skill and promise, and quickly becomes one of the strongest Jedi in the galaxy. And yet, this Jedi loses everything, turns to the dark side of the force, and ends up serving the very villain he had been trained to fight. And what sparked this surge to destruction? Love. Against the rules of the Jedi order and his master’s advice, Anakin entertains his childhood crush on Padme Amidala. The pair fall deeply in love. To save their careers, they keep this romance a secret. But the trouble starts when Anakin has a vision of Padme dying in childbirth. Unable to bear the thought of losing her, Anakin makes some questionable decisions that steamroll his descent to becoming a Sith Lord. In this way, love, coupled with pride and arrogance, is the hero’s hamartia – in other words, his tragic fall. The cinematic choices of the film even attest to this, as scenes from Padme’s death are interlaced with scenes of Anakin Skywalker’s death and the simultaneous creation of Darth Vader.

Another classic example of love leading to the destruction of the hero is seen in the classic movie “Braveheart.” This tale of rebellion and a quest for liberty begins with the murder of the hero’s wife. Unlike in “Star Wars,” William Wallace’s love does not immediately bring him to ruins. In fact, his determination to get revenge kickstarts his historical fame and empowers him to fight for a cause that would forever make him a symbol of Scottish freedom. However, Wallace’s love for his wife still leads to his demise. Wallace is executed for his Scottish libertarian efforts, a movement he might not have otherwise found had he not been running from the law after his reaction to his wife’s slaughter. Similar to the “Star Wars” example, Wallace’s wife makes an appearance as an apparition while Wallace is delivered his death blow. This correlation directly connects his love to his destruction.

One of the most famous pieces of literature that deals with love and misfortune is “Romeo and Juliet” by William Shakespeare. Two teenagers fall in love despite the feud between their families. In their attempt to escape and run away together, the pair are confronted with mishaps that lead to their suicides. However, it is Romeo who kills himself first, after misperceiving that Juliet had died. Love destroys Romeo first with his figurative death (abandoning his family and his name to run away with Juliet), and second with his literal death after thinking that he had lost Juliet’s love forever.

Another classic piece of literature where the hero’s demise is spurned from love is “The Great Gatsby” by F. Scott Fitzgerald. In this novel, the eponymous character goes to great lengths to secure the love of Daisy Buchanan. Gatsby illegally amasses a great amount of wealth, moves to a mansion across the bay from her home and throws extravagant parties in an attempt to win back her heart. Gatsby even takes steps to cover up a hit-and-run committed by Daisy while she was intoxicated. The widower left behind from the accident comes back and kills Gatsby out of revenge. Gatsby’s love and loyalty for Daisy consigned him to an untimely death.

In all of these examples, love leads to the death of the hero. But even in instances where the hero does not die, he is often hurt, and his feelings exploited. How often do we watch movies where the lead male character is cautioned away from romantic attachments? How many books do we read where the plot is predicated on a man’s struggle to overcome his amorous feelings? Why do we continue to perpetuate the stereotypes even as we claim to be more enlightened?

We need to stop treating love like a match with victors and vanquished. The more we teach our boys that love is a partnership and an alliance toward something greater, the more boys will grow into healthy, well-adjusted and self-aware men who are not afraid of attachment.