Get Daily Email
Join/Login CLOSE
Home / Featured Content / her, Him, and Her — Sam 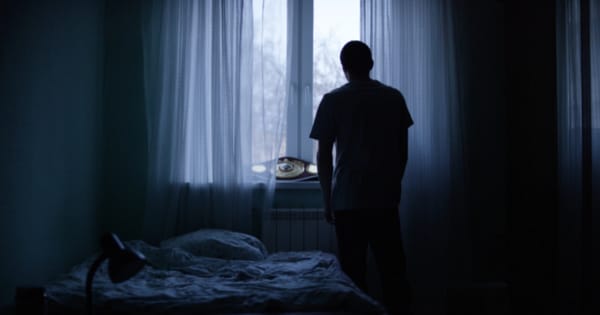 The sheets Lindsay had given him were a rusty red satin and didn’t remotely match his decor. He always tried to remember to put them on when he knew she’d be coming over. Lindsay wouldn’t say anything, but she would notice. She said she had bought them because they were her favorite brand and she joked that his bachelor flannels needed an upgrade if she was going to be staying over there. This from the girl who lived in a 4th-floor walkup with temperamental radiator and couch cushion you could literally see the stained stuffing through. Sam knew the sheets were more than a creature comfort. Lindsay needed to mark a place in his life. To be part of his room. To have some evidence of her existence in the space where he lived.

But it was a dance of satisfaction and frustration, trying to make her feel loved. And he did try- most the time, at least. He tried even when his actions were rendered invisible by the background noise of her insecurities. Even when he had to defend himself against her undisclosed storyline where he was perpetually the persecutor. And she the victim.

But he couldn’t blame her.

She thought it was a feeling, not a verb.

Sometimes her pain was meek. Sometimes it was defensive.

Sometimes it was a predator.

As he roused from his sleep, he knew before his eyes opened that he was alone. He didn’t even have to roll over to feel the emptiness of the bed. There was a moment of doubt, in the twilight between non-REM and consciousness, that she may have just gone to the bathroom, but all it took was a horizontal squint down the dark hall to see there was no light on anywhere.

He checked his phone. No text. No call. No blue checks to the message he had sent just as she had arrived late the night before.

“God-fucking-dammit!” echoed through the dark bedroom.

Sam fancied himself a thoughtful, intelligent man. And he was. One of his heuristics was that if he was angry, it meant that he was doing something wrong. His brain went into overdrive. Why was she gone? What did he miss?

What did he do wrong this time?

But it only took a second to figure it out and, as he did, the heels of his hands instinctively found their way to his eye sockets to preempt a headache that was already starting to build. Sam suffered terribly from headaches.

It had to be that he had shared with Lindsay about Chloe…again. Just last week. And he chastised himself because Sam had known, in the moment, that he would regret it.

Everything he believed to be true about women had told him he would. Lindsay had reassured him it was okay to be vulnerable — that she wanted him to share and that she felt closer when he did — and he had rationalized that it wouldn’t hurt to run the experiment. But instead of listening to the nagging voice in his head that said, “Shut your goddamn mouth” he had succumbed to the fantasy that he could be loved exactly as he was. That his weakness wouldn’t be exploited.

The same thing had happened a year prior, the day she bought him the sheets. He took a chance and, after 9 months of dating, told Lindsay about Chloe. Lindsay was sweet and supportive at the moment, reassuring him that she was glad he had shared and that she felt closer to him than ever. At that moment, he questioned if maybe his instincts to keep his a secret from the women he loved were off-base. As a solidifying gesture, she had gone out and bought him the sheets. Then, three days later, she imploded and relapsed hard into her eating disorder.

He learned that day that her words were meaningless. That her actions were the only real feedback she offered him. Sharing his feelings hurt her and that’s why he had decided not to do it anymore.

And that’s why her absconding was his fault.

He slipped on his jeans, a sweater, and some boots and flipped the kitchen light on to grab his coffee and her keys from the bowl.

“I’ll be here as long as you’ll have me”, she had said just the week before.

The bowl was empty.

She was a mother-fucking liar.

When she had given him her key, he didn’t add it to his ring with his others. He had his reasons. If the women whom he had invested 17 years and put a child in could leave, so could Lindsay. He wasn’t going to put it on there just to take it off again. It wasn’t as easy as changing sheets. That was probably his most oft-repeated justification. Also, he already he too many keys as it was. Plus, they spent most of their time at his place. And, he rarely found the need to have it with him and when he did, he could always go home and grab it. Most of his visits over there were planned, anyway.

And all that made logical sense.

But there was a part of him that also didn’t want it to get back to Chloe.

When the sweater of his marriage unraveled, he had used the same yarn to knit a new relationship with Chloe. She was younger, brighter, new and shiny and she made him feel attractive and validated. They worked in the same office. They had shared friends and interests and sometimes even thoughts. They took turns being each other’s savior when their respective marriages went to hell. He wasn’t ready to let Her go. He didn’t know if he ever would be.

When he had finally found the courage to end his marriage, it was because Chloe’s arms were there to fall into.

But Chloe had her own pain which interfered with their bliss, as pain is wont to do. Sam had slowly realized that their attraction was one more of deprivation than aspiration. She was so much like his sister, who had raised him. Chloe struggled with empathy and would vacillate between anxious and avoidant. She would abandon him, with no contact, for long stretches when he didn’t give her what she wanted: control, and would only concede when he finally gave chase. She’d build him up, only to break him down … and then leave.

So he went looking elsewhere and had found Lindsay. He knew, in the honest place that he rarely accessed, that Lindsay was a stand-in. A second to his primary. A runner-up. And as long as there was a sliver of hope with Chloe, he wouldn’t put that key on his ring.

But that didn’t make Lindsay any less important.

She had saved him, too.

And as his connection to Chloe unraveled, he used the same yarn to knit a relationship with Lindsay. This time it was more of a scarf.

Lindsay filled in the gaps and kept the cold at bay. And he loved her for it.

After all the things he had done for Lindsay — gotten her into treatment for her eating disorder, helped her find a gallery for her paintings when she was just a nameless starving artist, helped her find a new apartment that allowed her to let go of her past — and she goes and fucking bails. Just like Chloe.

It was so fucking confusing.

He knew Lindsay was a better woman for the challenges he’d set before her, and she knew it, too. She wanted to be a better version of herself. To be worth something. Lindsay didn’t want to be broken anymore. He wanted that for her as well. There were times when he conjured a future with Lindsay, and they felt as real as the fantasies he had about Chloe.

She had taught him things that were game-changing, too. Through her, he had come to believe that there were women in the world who didn’t want quite as much from him. There were fleeting moments where he believed that she understood him — that they were on the same team.

But he had thought that long ago about Chloe, too.

Obviously, he was wrong.

Because they always fucking bailed on him.

He kicked off his boots, laid back down in the bed and sighed as he looked out his window and watched the night begin its transformation into the morning.

It was his favorite time of day. Their favorite. If Lindsay were there they’d be making love in the dark or sharing both coffee and the thoughts that had come to them in the twilight of their sleep. That’s when they got some of their best ideas.

Sam scanned the street. The man was there, as always. Jon, his across-the-street neighbor, let the guy seek shelter next to his porch on winter nights, as long as he was gone by daybreak. He always found the man’s eyes unsettling…like they were looking through him. Today was no exception. They locked gaze — for a split second — before Sam broke contact and rolled on his side, picking up his phone from its cradle.

“Hey”, he texted Her on an impulse. “Thinking about you.”

As he drifted back to sleep, he sank deeper into his sad and his pain. Every few minutes he sleepily checked his phone. Blue checks? No. Blue checks? No. It had been three months since She left. Still, each flutter of his eyes brought hope that She’d read it. That She’d save him from loss as she saved him three years before.

Anything was better than being alone.

Originally Published on PS I Love You