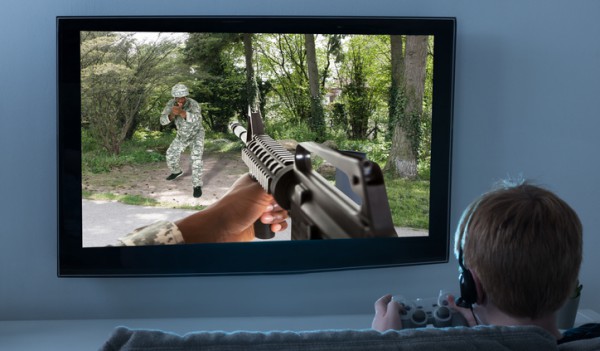 Plenty of articles have debunked the relationship between video games and violence, but a recent study, published in the journal Psychology of Popular Media Culture, illuminates the surprising racial bias behind the impulse to say gaming provides a training ground for mass shooters.

The paper, written by researchers at Villanova University, Virginia Tech, and Pennsylvania State University, looked at two studies — one focused on news articles about mass shootings over the last four decades, and one that asked college students to read fictionalized accounts of a shooting and then discuss what they thought caused it. Researchers found that racial stereotypes factored into peoples’ assumptions about the alleged shooter.

Putting the responsibility for mass shootings at the feet of PlayStation or Xbox is a cop-out.

The authors make note of the embedded associations between minorities and violent crime, and how “this effect seems particularly strong with the stereotyping of Black Americans.” These findings speak to the racial dynamics that explain why many are quick to correlate mass shootings with violent video games. This correlation serves a subtle yet powerful function — to make a distinction between White violence as the result of negative influences and Black violence as innate. Several other studies show that Black people, particularly Black boys, are seen as older, while Black men are viewed as larger than they are. A University of Virginia study showed that people are likely to see Black people as less susceptible to physical pain than their White counterparts. Associating Blackness and violence is a form of implicit bias that is difficult to erase from the American conscience.

However, the flip side of Black criminality is White innocence — one cannot exist without the other. On a deep and implicit level, blaming violence on video games deflects from suggestions that mass shootings are evidence of a troubling pathology in White males.

Though it has been reported that most domestic terrorists are White men, the racial stigma rarely sticks. These men and boys are often painted as troubled youth who got mixed up in the wrong crowd. Each White male shooter is treated as a lone wolf, and each mass shooting is framed in isolation. Video games, in this context, are just another scapegoat employed to avoid an uncomfortable conversation.

However, the answer is not to pathologize white males. We need to ask tougher questions: Is the average American aware of how the toxic online culture for men is used as recruitment grounds for White supremacists? What happens when men go online and receive the best of what we all want from communities — friendship, respect, empathy, connection, and catharsis — by presenting the very worst version of themselves? Why are mass shootings so common in the United States and so rare in the rest of the world? Why is it so hard to any implement reasonable gun restrictions in America? Why does this issue produce more evasion than introspection?

The great American writer James Baldwin once wrote that “the American confusion seeming to be based on the very nearly unconscious assumption that it is possible to consider the person apart from all the forces which have produced him.”

Putting the responsibility for mass shootings at the feet of PlayStation or Xbox is a cop-out — one that reveals how uncomfortable we are connecting violence and race when the perpetrator is White.

This post was previously published on GEN and is republished here with permission from the author.
—