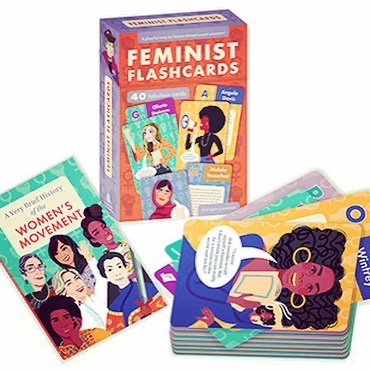 The flashcard format – tiny bites of important information and super cool art – makes it really enjoyable to learn about incredible women without having to plow through a dry text book,” – Author Julie Merberg

Merberg, along with coauthor Samantha Guss, selected a diverse group of women, from Elanor Roosevelt and Malala Yousafzai to Janet Mock and the Feminist Five, and explain what they did to make the world better, safer, more interesting place. Every flashcard features a funky portrait by illustrator Alyssa M. Gonzalez, a concise summary of accomplishments, and an inspiring quotation. 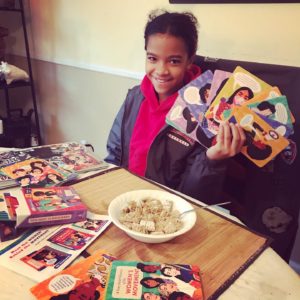 Author’s daughter with her deck-“I LOVE to learn about women and girls who make the world better for everyone! I don’t think kids learn enough about women leaders in schools.” -Jojo

Packaged in a sturdy keepsake box, Feminist Flashcards also includes a mini-book. Inside, readers will find a timeline of the global women’s movement, a list of surprising laws concerning women that are still on the books today, and instructions for games to play with the cards. Available in plenty of time for the holidays, Feminist Flashcards is the perfect gift for curious feminists of all ages. As Guss says, “You’re never too old or too young to have cool feminist role models.” 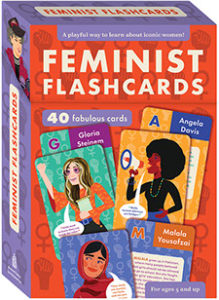 How did you select the women who would be included in Feminist Flashcards?

Julie Merberg: We wanted a good mix of iconic feminist as well as lesser-known women who had accomplished very cool things. Cognizant that the march towards women’s rights has produced at different places in different parts of the world, we also wanted to be sure to include representation from as many different regions as possible. There was lots of research and lively discussion.

Samantha Guss: We looked for women whose individual stories excited us. Not everyone in a card deck or in life can be a scholar or a philosopher. Women activists, artists, and revolutionaries doing real, grassroots work-those are the role models that really capture kids’ imaginations.

Did Feminist Flashcards introduce you to anyone you had never heard of before?

JM: Absolutely! I had never heard of Loujain Alhathloul, a Saudi women’s rights activist. She was arrested for daring to drive before women were legally allowed to do so in her country. And she is in jail now-she actually refused a release deal that would have required her to deny that she was tortured in jail. We don’t touch on violence in the cards, but she is amazingly brave and bold. 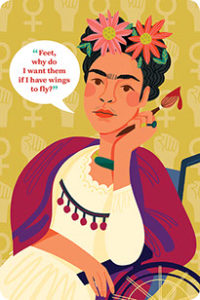 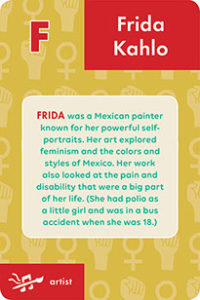 SG: Tang Qunying! She was a poet, a publisher, a revolutionary, and a suffragist who delivered what I like to think of as the most famous slap in Chinese history onstage at a political convention when a former ally threw women’s suffrage under the bus.

How did you approach illustrating each of the women?

Alyssa Gonzalez: Julie and Samantha were awesome and provided a deck of inspiration shots they loved for each of the women, as well as memorable things to note about them. If it was available, I’d also watch videos of the women given a speech, dancing, or singing to get a more genuine feel for their mannerisms. It was important for the illustrations to capture their voice or a moment of action.

What is the most surprising thing you learned while working on the deck?

JM: I guess it shouldn’t be surprising, but it’s depressing to see how hard it is for women in many parts of the world to get an education. It’s the ultimate form of oppression.

SG: There are some really weird, highly specific laws in place around the world. In Moldavia, a woman cannot drive a bus with more than 14 seats. In France, a woman cannot carry a load heavier than 55 pounds, but can carry a load of up to 99 pounds, if she uses a wheelbarrow. Who comes up with this stuff?

Do you have a favorite quote from the deck?

JM: I have such a Malala Yousafzai crush: “One child, one teacher, one book, and one pen can change the world.” She’s living proof of that.

SG: I love the Nawal El Saadawi card: “I speak loudly, because I am angry.” That’s a great lesson for girls. Sometimes you have to speak loudly when you’re angry! Your voice is important. 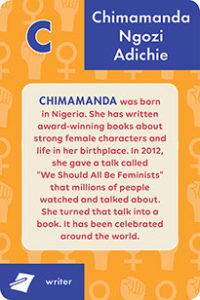 What do you hope kids (or even adults) gain from Feminist Flashcards?

JM: The package looks great and feels great and is designed in a way that is fun and productive to dip into. I hope they will, and I hope they’ll learn something inspiring each time they do.

AG: I hope everyone can learn something new from these cards as I did, see a little bit of themselves in each of these women, and then use their stories as fuel to create the next inspiring feminist movements!

This is a no-brainer gift that will be featured in my 2019 All Things Geek Holiday Gift Guide and is available at Downtown Bookworks, Target, right now!

You can use the Amazon Prime Widget below for a discount!