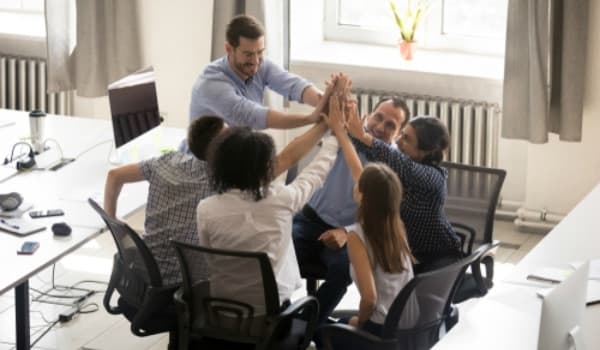 I started Rethink Fair Trade Outsourcing in September of 2015 largely because I was personally going broke. For five years, I had another business, MODsolar, that had a great dream but was in a bad shape because of changes in the industry at that time.

Margins were too low and we were in the wrong end of the business to make any money — and that meant that I was earning well below my living expenses, with a young family at home to support.

Worse, the pressure of always being broke meant I did things to people that I now regret.

Since 2012 when MODsolar hired its first outsourced development firm in Romania, I had always wanted to do outsourcing because it was such an international business but decided we needed to stay focused on MODsolar’s mission of broadening solar adoption.

In college, I was a very international guy, loving the time I worked and studied overseas in the mid 90’s during University.

In 2013, we set up an office in the Philippines to do some work. In 2014, we went to Berlin to open up the German market. I was turning my little solar business into something international.

But unfortunately, it was not sustainable, and MODsolar almost didn’t survive.

I got back from a visit to the Philippines in the first few days of September 2015 and decided to start to Rethink. I launched a website less than 30 days later, and Rethink got its first contract for outsourcing services in November 2015 for 3 data encoders.

During the MODsolar years, I used to joke that we were “making revenue but not profit.” That fact meant that I was always in a position to treat people badly. Losses on the profit and loss statement, alas, do not pay the bills. Cash will always be short, but stress will be found in abundance.

With Rethink, I was determined not to repeat my mistakes.

While I could now claim that we were “making revenue and profit,” (author’s note: enough that I could comfortably feed my family), at some point in 2016, I realized that I was doing it all wrong.

In particular, we were still treating both employees and vendors poorly. I was seeing A/P statements that were too heavy with obligations for no reason, and I was hearing complaints from people about us not being fair in the way that we paid our employees.

I had been so broken for so long at MODsolar that I had made the classic mistake of treating other people badly for my own profit.

In general, this was not the type of person I historically was, or certainly thought of myself to be, but it is who I had become when I wasn’t paying attention — when I was focused so intensely on something else, something bigger that I was trying to do. A classic mistake I know many entrepreneurs make — “the ends justify the means.”

But that game only lasts so long.

People catch on and, even if they’ve gone out of their way for you initially, if you don’t treat them well going forward, they certainly don’t treat you well the second time around.

In fact, they do the opposite, because that’s how you’ve trained them your relationship will be — lopsided and uneven. So they have to get from you what they can when they can — because they know you won’t permit them to earn otherwise. How can you blame them?

At the end of 2016 and the beginning of 2017, things were going well enough that I finally had time to think about the type of person, and the type of entrepreneur I wanted to be going forward and for the rest of my life.

It was around this time that I had become a fan of the specialty coffee industry through a small, now-defunct investment I made in the Philippine coffee industry. This introduced me to the concept of Fair Trade.

A Short History of Fair Trade

The fair trade movement traces its roots back in 1827 when a moral and economic boycott of slave-derived goods began with the formation of the “Free Produce Society” in Philadelphia. The Free Produce Movement emphasized the value of the honest labor of free men and women, and tried to determine the unseen added costs to goods such as cotton and sugar which came from the toil of slaves.

However, the association of producers of non-slave products wasn’t able to grow large enough to gain the benefit of economies of scale, and the goods produced always ended up being sold at higher prices than competing goods. While the movement lost its steam in 1847, the Quakers in Philadelphia continued to practice it until 1856.

In 1897, the Salvation Army launched the Hamodava Tea Company, which pioneered a fair trade model that paid fair prices to tea farmers while giving them the opportunity to purchase plantation land through a co-operative. The purpose of this scheme was to give the farmers financial independence.

The idea immediately caught fire, which became a blaze as various religious groups and NGOs began applying fair trade practices to their dealings with marginalized producers.

But, it was during the late 1940s that fair trade really became global. The Mennonite Central Committee (MCC) and SERVV International, a 501(c)(3) organization operating in four continents, started developing viable fair trade supply chains in developing countries, such as Puerto Rico.

That inspired Edna Ruth Byler, a Mennonite mom and an unexpected entrepreneur in Pennsylvania, to put up a small shop in her hometown. It was the first fair trade shop that sold needlework and other handicrafts made by women from Puerto Rico. That was the beginning of the fair trade movement in the United States.

The fair trade movement truly unfurled its wings and took flight when European traders started importing third-world goods, such as cane sugar in the 1960s and fairly traded coffee sourced from Guatemala and Nicaragua in the 1970s and sold them in world shops in the Netherlands and United Kingdom. From there, the movement spread to France, Germany and the rest of the world.

Pretty soon, a collective body of free trade organizations was formally established in 1989. It was originally known as the International Federation of Alternative Traders (IFAT), but it later became the World Fair Trade Organization.

1) it’s transactional in nature, and transactions are the bedrock of business, and

2) it tries to give trade a mission — to direct it for the good of those involved.

Of course, this could all be summarized simply by the very famous old adage — the golden rule “Do not do unto others as you would not want them to do unto you.”

I realize that in the current state of affairs in America, with a political culture that is win-lose, a win-win philosophy like this may sound trite and naive. But if you think about it, it is not really a large leap of faith. The golden rule philosophy has served entrepreneurs and humans well for centuries, but today it is more important than ever.

Keep in mind I am not here preaching this philosophy without experience — I have done it both ways — treating people well and treating people badly in several businesses and numerous transactions. For all of those entrepreneurs out there hopefully listening — trust me — you make both more revenue and profit when you apply this rule liberally in your business dealings.

I will show you how in a series of articles focusing on each of the following topics. Each topic will be long enough in itself, so they deserve their own article.

Contracts — You must construct your contracts to be a win-win for those involved, ensuring that each party is properly compensated for the risk they undertake in the transaction.

Incentives — you must work hard to properly align incentive structures among all actors in a contract (not just direct actors but indirect actors — like those provisions in your contracts that may negatively impact your employees).

Relationships — you must adopt a set of habits and practices that keep that relationship healthy — including regular communication, reviews of the relationship, and above all else — honesty.

Conflict — what to do when a counterparty previously agreed with the principles of fair trade — but it turns out they were lying (either to you or to themselves).

Taken together, they give you 4 simple tools to apply to both vendors and employees to ensure that you will apply the principles of Fair Trade to these relationships, which I promise, will return dividends to you — in the form of both higher revenue and profits.

It will take some time to read them, but know that at the end, you will save yourself from the mistakes that I made — to the benefit of your employees, vendors, and yourself.

Mike is the founder and CEO of Rethink Fair Trade Outsourcing, a company that makes use of free markets for good and not evil. Visit www.rethinkstaffing.com for more info.