Get Daily Email
Join/Login CLOSE
Home / Featured Content / How Meditation, Yoga, and Other Spiritual Practices Can Blind You From Inequality 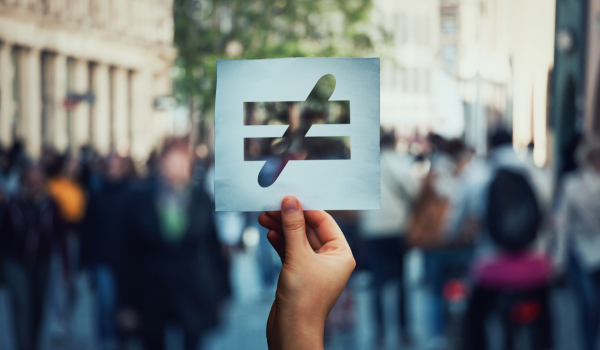 Coined in the 1980s by psychologist John Welwood, it means the “use of spiritual practices and beliefs to avoid dealing with our painful feelings, unresolved wounds, and developmental needs.” In other words, it’s pretending — often unconsciously — that our spirituality and beliefs about universal truth mean that we don’t have to work with our own particular, relative neuroses.

You might be a serious yoga student or meditation teacher, with all the poses and sutras memorized, but you might also repress feelings and concerns in your everyday life. If you aren’t consciously using resources, like therapy and willing friends, to address those feelings and concerns, you undoubtedly burden or even hurt others with your patterns of avoidance or reactivity. Just because you learned from the Heart Sutra that everything is actually empty doesn’t mean you can communicate in a healthy way with your girlfriend.

Many a spiritual leader has fallen in this trap — and hurt others along the way. Tibetan Buddhist master Chögyam Trungpa passed away at the age of 48 after years of heavy drinking. He also allegedly took advantage of his superior position by having sex with a number of his female students — as have undoubtedly countless other male leaders, such as Zen monk Katagiri Roshi.

As spiritual teacher David Deida says, “You can be a wreck and still be a master yogi.”

Fortunately, what’s often called “American Buddhism” is steeped in a healthy dose of Western psychology, which helps limit spiritual bypassing. Well-known teachers such as Jack Kornfield and Tara Brach combine meditation practice with aspects of therapy to heal trauma and work with difficult emotions. But, maybe even because of this focus on individual psychology, most of the American Buddhist community continues to bypass related but altogether different unresolved wounds, our particular, relative conditions.

By “conditions” I mean society, how we are treated by others because of our skin color, how much or how little property we own, what we do for a living, how our body looks, and so on. There is no “self” that is separate from these forces, yet it’s tempting to use spirituality, particularly when it’s combined with psychology, to try to discount them. Simply put, we can use spiritual beliefs and practices to not only avoid seeing a therapist but also to deny the fact that we live in an unjust society.

When your spirituality involves navel-gazing about “growth” and “self-improvement,” you shouldn’t pretend that you’re doing it for everyone else, that you’re “being the change you want to see in the world.” You’re actually sidestepping the fact that many of the positive aspects of modern life were won by groups of people coming together to fight and struggle. The five-day workweek, the eight-hour workday, Social Security, and more were won by unions of working people. The right to vote, by women and black Americans. Progress is not automatic or guaranteed — it must be taken from the hands of the powerful. At least it has to be that way in our society, where freedom is bought with money and property, which many of us don’t have much of.

Sure, meditation and other spiritual practices can free your mind, but they can’t change the fact that black Americans own approximately one-tenth of the wealth of white Americans.

You can pretend that you don’t see differences, that you’re colorblind, that you treat everyone the same regardless of their gender or sexuality, but that’s a delusion. Or, more precisely, that’s missing the point. Racism, sexism, and other forms of oppression are systemic, meaning they exist because entire groups of people have little political and economic power relative to other groups. Your colorblindness, while well-meaning, isn’t going to close the racial wealth gap or stop police from killing poor and black Americans.

Yet, how you, individually, treat others does matter. Systemic oppression plays out in our communities, both spiritual and not, in unconscious ways. Just as we are shaped by our experiences early in life, especially how our parents cared for us, we are deeply conditioned by our skin color, gender, and class. The “self-improvement” that matters is taking responsibility for how we show up in our workplaces, yoga rooms, and meditation centers. We must be responsible for the aspect of ourselves that is socially constructed. Trungpa not only took advantage of his superior position as a teacher, but he also took advantage of being a man in a religion (Buddhism) and society that have long given more power to men than women. Conscious of his choice or not, he wasn’t being responsible with the power automatically granted to men in a patriarchal society. Buddhist teachings of non-duality can help us here: your race and gender are both part of you and not part of you. There are no such things as “being a man” or being “white,” but both are parts of the mask that others see. Borrowing a phrase from Tibetan Buddhist Tsoknyi Rinpoche, they are “real but not true.”

To be clear, individual work, both spiritual and therapeutic is necessary. Your relationship with yourself shapes how you relate to others. Your physical body needs to be taken care of with regular rest and solitude. Unfortunately, but understandably, a sort of “political bypassing” dominates many left-leaning activist circles. Any notion of taking care of yourself is snuffed out as “individualistic” or “bourgeois.” Journalist Laurie Penny summed it up in an essay in The Baffler:

I’m sick and tired of seeing the most brilliant people I know, the fighters and artists and mad radical thinkers whose lives’ work might actually improve the world, treat themselves and each other in ludicrously awful ways with the excuse, implicit or explicit, that any other approach to life is counterrevolutionary.

Go figure that even in groups struggling together to change society the bypassing is gendered. Again, Laurie Penny:

I’ve heard men on the left write off anti-sexist, anti-racist politics as hopelessly individualistic, whilst also refusing to do the basic work of self-care and mutual care that keeps hope alive and health possible, because that work is women’s work, undignified in comparison to watching your life fall apart while you wait for the revolution or for some girl to pick up the pieces, whichever comes first.

What to do once we realize we’re using spirituality (or politics) to bypass working with difficult emotions and conditions is another matter altogether. But that we notice is a huge first step. I suspect the next step, like anything that makes a real difference, takes a great deal of compassion.

This post was previously published on JeremyMohler.blog and is republished here with permission from the author.

Facebook84TweetPin3EmailShares87
wpDiscuz
0
0
Would love your thoughts, please comment.x
()
x
| Reply
Share this ArticleLike this article? Email it to a friend!
Email sent!