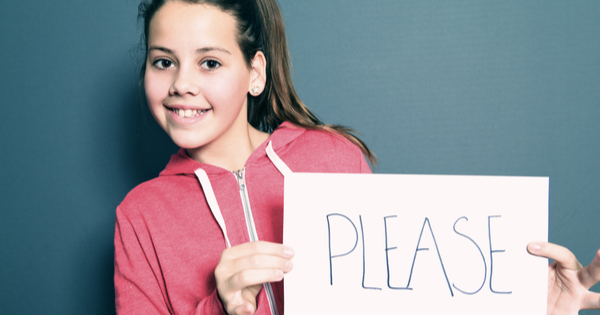 Raising a child who has good manners is simply about what you teach your child.  Raising a well-mannered child is about a parent helping their child learn respectable habits.

Raising children with good manners is not all that different from teaching a child to tie their shoes, brush their teeth or eat with dining utensils.  If you didn’t teach your child to do the aforementioned things, today you would have a child who wore Velcro shoes, was known by the other kids as “Yuk Mouth” and who when eating in public would be thought to have been raised by wolves.

Good manners as it is with anything that we hope will become customary behavior are simply habits.  Good manners are habits that are best formed when children are young and have yet to be tainted by outside influences or coddled extensively by well-intentioned but clearly misguided parents, families and friends.

Trust me, the last statement is not meant to be an indictment.  We have all been there.  No matter how great a parent you have been, you have undoubtedly found yourself contemplating at least once what you could have done differently so that your child’s behavior might have been different.  At some point, we have all wondered whether or not we have been far too affable and generous to our children.  We have all wondered, if only privately if we have erroneously enabled our children’s poor behavior.

There is good news regardless of how much coddling you’ve done or how erroneous your enabling has been.  So fear no more; it is not too late to teach an old dog new tricks or in this case a child new habits.  No matter the age of your child, they can still become the well-mannered person that you always intended.  The task might be a bit more tedious but it can be done.

Start With the End in Mind

When my son was 6, I put him out of MY HOUSE NAKED.  I put the last three words in the last sentence in capitals and bold because I did not want you to mistake what you had just read.  I will share the story with you at another time but the summarized version is that my son was not developing acceptable behavioral habits.  The issue was minor but my fear was that a small issue as a child has the potential to become a large fundamental issue by adolescence.

At the time, I was criticized by everyone including his mother, my mother and any other mother for putting his momma’s “baby” outside nude, on a cold November evening.  Guess what?  I didn’t care what anyone else thought.  I didn’t give a rat’s (you know what) because I had an image of the type of man I expected my son to be.  At that moment, on that cold November evening, the 6 year old in my home was not projecting the potential to be the man I envisioned him becoming.

Not to be monotonous but the key to raising a well-mannered child, a child with respectable habits is to have them partake in repetitive noble actions.  Earlier I mentioned each of us being the parent of children who can tie their own shoes, brush their own teeth and feed themselves with a fork and knife.  Your child now has the capability to tie their own shoes and do the other aforementioned things because you helped them practice this worthy behavior until it became a habit.

Your child can do all these good things because you took the time and energy to make sure that they learned them.  Raising a child with good manners is effectively the same process.  You have to make them do it, suffer through the learning process with them until the desired manner becomes a habit (an automatic instinctual behavior).

It’s All Up to You

Just like it was for me on that fateful cold November evening, you have to be a parent.  Being a great parent means having to do things that are not always fun, convenient or mainstream.  Putting my child outside naked was neither enjoyable nor conventional but it was effective.  He remembers that day like it was yesterday and it has left an indelible reminder that the world can be a cold place, love is sometimes tough, good manners are not optional and being a man means being willing to start out with nothing, naked.

Having to stand in the bathroom watching chunks of toothpaste dropped inside the sink, toothpaste suds splattered all over the mirror while your child managed only to brush half their teeth was not always the best use of your time and energy but you did it.  You suffered through the experience because you wanted your child to have a great smile; to be plaque, cavity and gingivitis free; and you didn’t want to shell out money for braces.

Teaching your child how to use a spoon, fork and knife instead of their hands was also less than enjoyable.  You certainly could have found better things to do than have to put plastic on the floor underneath their seat and watch as they flicked peas and carrots on the floor and walls.  The much simpler thing to do would have been to juice and blended all their food, put their liquefied meals in a Sippy cup and called it a day.  But you didn’t take the easy, convenient way out because you didn’t want your child to be the local caveman or cavewoman.  So like all the other habits you deemed desirable, you endured the trial and error until they learned and perfected their dining habits.

Raising a well-mannered child is the same as the development of any good habits, you have to start with the end in mind, repeat the desired behavior over and over without failure until it is mastered and during the process you have be a great parent – committing to the end result despite the present availability of simpler more convenient immediate options.

If you do these things, your child will be the poster child for good manners.  However, if you don’t follow this process, your child may very well end up on a real and very different poster…WANTED.  Do yourself, society and me a favor, don’t let your child end up on a WANTED poster, teach them good manners before it’s too late.

Nathaniel A. Turner, J.D. is the author of Raising Supaman and has recently launched a campaign to raise the expectations of parents nationwide. For more information visit www.raisingsupaman.com.

END_OF_DOCUMENT_TOKEN_TO_BE_REPLACED

Facebook19Tweet5PinEmailShares24
wpDiscuz
Share this ArticleLike this article? Email it to a friend!
Email sent!