Reading can transform your health, wealth, and productivity.

Reading offers the freedom to roam the expanse of space, time, history, and offer a deeper view of ideas, concepts, emotions, and a whole body of knowledge.

Except we don’t remember a lot of what we read after a few months or years.

We retain only a fraction of what we learn the first time.

“People usually forget 90 percent of what they learn in a class within 30 days. And the majority of this forgetting occurs within the first few hours after class,” says John Medina, author of Brain Rules.

The good news is, you can do something about it.

The value of spaced repetition

“If one cannot enjoy reading a book over and over again, there is no use in reading it at all.” ― Oscar Wilde

The brain needs time to absorb and process new knowledge.

Science has shown that when your brain initially stores information in your long-term memory, it’s not permanent until you revisit it a few times to increase the chances of retaining it

This is because the brain needs time to build a structure and better connections surrounding new information.

“Studies have consistently shown that we can only remember five to seven new pieces of information at a time. It’s fascinating research, but it also has practical implications for how we should learn,” writes James Gupta of The Guardian.

The Association for Psychological Science thinks it’s the best way to learn and retain new information.

Spaced repetition involves repeating what you are trying to retain over a period of time.

In the late 19th century, Herman Ebbinghaus (a psychologist) was the first to systematically tackle the analysis of memory.

He measured how long it takes the average person to forget a list of random nonsense words. It turns out that over 90% of the information disappears within a few days.

His Forgetting Curve which hypothesises the decline of memory retention in time was influential to the field of memory science back then when he was studying how the brain stores information.

He once said, “With any considerable number of repetitions, a suitable distribution of them over a space of time is decidedly more advantageous than the massing of them at a single time.”

Spaced repetition mitigates the effects of the Forgetting Curve. 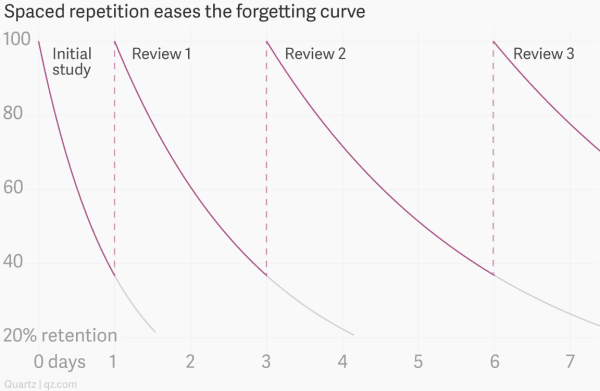 When you quickly revisit the material a number of times, the pieces of information you retain strengthen, instead of quickly fading away.

Pierce J. Howard, the author of The Owner’s Manual for the Brain, explains:

“Work involving higher mental functions, such as analysis and synthesis, needs to be spaced out to allow new neural connections to solidify. New learning drives out old learning when insufficient time intervenes.”

Spaced repetition as a retention technique works because you are relying on the brain’s slow but effective way of retaining information better.

“Spaced repetition is simple, but highly effective because it deliberately hacks the way your brain works. It forces learning to be effortful, and like muscles, the brain responds to that stimulus by strengthening the connections between nerve cells,” says Gupta.

Re-reading books shouldn’t be a chore, especially if you choose books you are curious about and deeply enjoy.

Instead of re-reading the entire book again, start with small chunks at first and keep on testing.

After the initial read, try to test yourself as much as possible.

This time, if you didn’t highlight, underline or take notes, do that as you revisit the book for quick and effective spaced repetition.

Revisit it again after six months.

You can put it on your calendar to mark the last time you read the book and the next time you need to read it again.

Spaced repetition can help you find new meanings, key details you missed, and basic ideas you ignored each time you read it again.

It’s the best approach for retaining key ideas and concepts.

Consciously revisiting my favourite books and taking notes is one of the best learning methods I’ve found.

It helps me retain more of what I read, especially when I’m reading multiple books at a time.

This post was previously published on Personal Growth and is republished here with permission from the author.