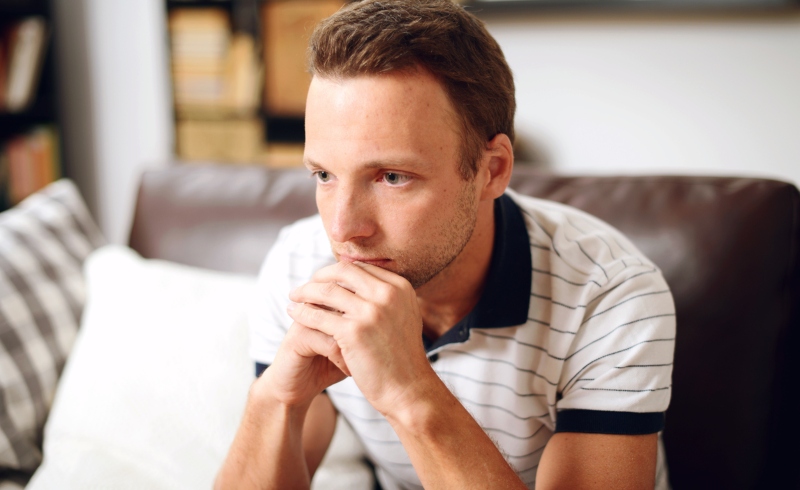 “Can I talk to you about something important?”

I’ve always welcomed questions from gay men that fall outside the predictable range - ”Where are you from?” “What do you do?” “Top or bottom?” - and I’d do anything to help a friend, but I can’t think of eight scarier words in the English language. They’re right up there with “We have to talk.” When has “Can I talk to you about something important?” ever been followed by anything good?

At least I knew my friend wasn’t about to dump me. But after a dramatic brace-yourself-for-a-whopper build-up that had him apologizing in advance over what he was about to say, what he revealed may have been as heartbreaking to hear as “I want to see other people” or “Let’s take a break.”
Actually, the punchline itself was less disturbing than how tortured he looked as he delivered it. I wasn’t sure if he was holding back tears or psyching himself up for inevitable waterworks.

There, he said it. He wasn’t crying (thank God - I’m no good at soothing tearfulness), but his expression suggested he thought he couldn’t possibly have said anything worse. Had he assumed I would interpret his words as a personal insult? What he said, after all, wasn’t so different than one Black person telling another, “I don’t want to be Black,” as if there is something inherently wrong with being Black.

I didn’t take it personally, even before he explained he had nothing against gay people. He was a fixture on both Grindr and the gay scene in Bangkok, where he was from and where I was living at the time, and nothing he’d previously said or done in the year or so I’d known him had betrayed even a hint of gay shame.

Yet despite his total immersion in all things gay, deep down, he didn’t want to be one of us. He wasn’t necessarily sold on having a wife, kids, and a white picket fence, but he figured life would be a lot easier if he bought into the heterosexual dream. Compounding his personal dilemma was a moral one: If he were to ever come out as gay to his ultra-religious Sikh family, how would they react?

With or without the religious angle, it’s a question that plagues every gay person in one way or another before coming out. Many of us are terrified of disappointing our parents and possibly being completely ostracized by them. For my 23-year-old friend, it was both a matter of parental disapproval and going against his religious culture and its strict, unyielding rules regarding sexuality, ones he wasn’t sure he had the strength or desire to break.

I carefully considered my next sentences. I didn’t want to tell him that it gets better. It does, but what use is that to a young person in the throes of confusion and fear over his sexuality? Yes, it gets better, but how do you get there? The slogan “It gets better” promises a better future, but what do you do in the meantime?

Patience is a virtue that doesn’t overcome the hurdle of gay shame on its own. There would be some waiting involved, but there would have to be action on my friend’s part, too. I told him he had two choices: He could submit to the will of others and live the life tradition had laid out before him, or he could refuse to let other people decide how he feels about his own sexual orientation.

In saying he didn’t want to be gay, my friend never mentioned any specific aspect of gay life that he found unappealing. That was a good start. Unlike so many young men who struggle with their sexuality, he didn’t seem to be harboring internalized homophobia.

Regardless of how you identify, or where you fall on the sliding scale or if your scale slides at all, one’s sexual orientation is what it is. You can deny it, but there is no escaping it.

Any self-hatred he felt was being reflected off other people. He didn’t think straight was somehow superior to gay. They hadn’t convinced him of that. But he thought life would be better as a straight person because he wouldn’t have to challenge centuries of tradition. Nobody would be disappointed.

I told him he’d have to determine how important it was to him to become his own person. He’d have to figure out the role he wanted his culture and religion to play in his life, and if they were more important than his personal happiness.

If he decided to live a life of truth, he would have to find a way to make his identity more than his culture and religion, or even his sexuality. Culture and religion are learned. They’re intrinsic to who we become more than to who we are. You can reject both without living a lie. Sexual orientation is different. Regardless of how you identify, or where you fall on the sliding scale or if your scale slides at all, one’s sexual orientation is what it is. You can deny it, but there is no escaping it.

In the end, he’d have to learn to accept it as something he couldn’t change, like his height or his shoe size. Like everyone with unwanted and unchangeable characteristics, he had two options: focusing on who he wishes he could be or determining how he was going to live with who he was.

Should he keep it to himself or shout it from the rooftop? That was for him to decide. The road to self-acceptance is often a long one, filled with bumps and potholes. The speed with which you cover it is up to you.

I didn’t know if I helped him. He said I did, but he didn’t look any less torn. I couldn’t tell him which road to travel, but I could promise him that if he had the courage to take the more daunting of the two, he would end up in a far better place.

Jeremy Helligar is a writer, journalist, pop culturist, and world traveler from New York City, where he spent 15 years working as a writer and editor for People, Teen People, Us Weekly and Entertainment Weekly. Between 2006 and 2014, he lived in Buenos Aires, Melbourne, Bangkok and Cape Town while launching his Theme for Great Cities blog and completing his first book, Is It True What They Say About Black Men?: Tales of Love, Lust and Language Barriers on the Other Side of the World (Amazon, November 4, 2014). The Huffington Post, Thought Catalog, The Advocate, and Queerty, among many other print and online publications, have featured his essays during his years abroad. He’s currently based in Sydney, where he’s finishing up his second book, Storms in Africa: Notes from the Motherland, and wondering if he’ll ever make it to Antarctica.