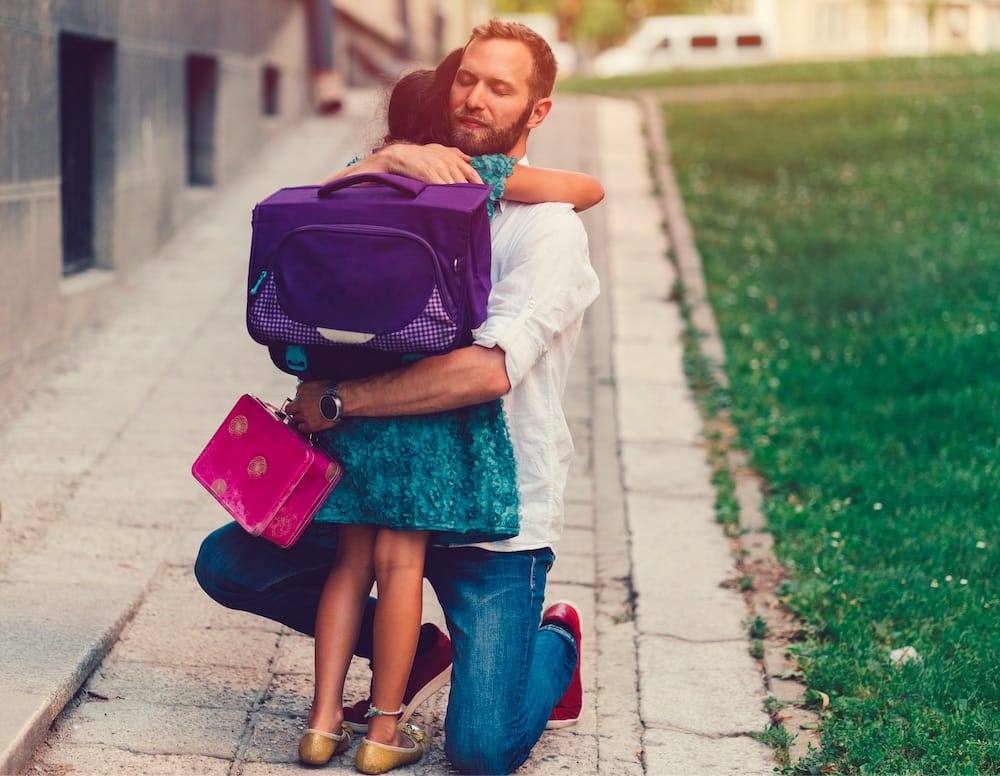 It was a Wednesday. The afternoon was moving along as it typically does. My daughters and I sat down to eat a snack. I asked both of them, “Who did you each lunch with today, sweetie?” My older daughter looked at me and began to cry. Tears and a hug later were followed up by a question I had asked myself growing up. But the context was different and I had no one to answer. I asked the question because I was pushed and tripped. Hers was because she was told nobody likes her.

For a few months others children, some of whom she had been friends with since preschool, had been telling her mean things. Her circle of friends had become unstable. One day she would tell me excitedly about the imaginary play they would have on the playground and all the different characters each child was.

Far more often were stories about children saying or doing something mean to my daughter.

About two months ago she began asking to go to a new school. She was saying she had no friends and that everyone was mean. We heard vivid details about what children were saying and doing to dip into her bucket. Bucket dipping and filling is a conversation we have been having since she was in preschool, so she was well versed in the wide range of bucket dipping behaviors. The same child was usually the leader and the other children would follow.

The followers were not as consistent, but there were usual suspects. I knew my daughter was not always innocent, given the fluidity of the social circle, but I’m confident that like most of the other children she was doing anything she could do to feel like she belonged. I am certain that she was not the only child feeling like they didn’t have friends in her class.

Her tears were pouring down her cheeks. I hugged her and said nothing. After 20 seconds or so, with her eyes looking up but mouth buried in my chest, she said, “Everyone was bullying me today. [One child] told me that no one likes me at school and [other kids] laughed.”

“I don’t want to go back to school,” she said. “Why do I always get bullied?”

With that question, I flashed back to my days on the school bus and children tripping me, pushing me, and touching me in hurtful ways. I feared the bus rides home. I often asked, “why me?” The physical aggression I experienced was having a similar psychological effect on my daughter, except hers was what researchers have termed relational aggression.

As her tears began to subside I responded to her question by saying, “Some children need to fill their buckets and they have learned to try and fill buckets by saying mean and hurtful things. Do you think you can stay away from bucket dippers and surround yourself with bucket fillers like teachers and other children?”

“Dad, I can’t. I get put in groups with them and as soon as I feel like we are friends again they follow [another child] who is a bully that I’m trying to stay away from. I want to go to a different school.”

“Ok, can I do some research and talk with [your principal] and some friends about bullying first?”

She nodded in agreement.

That night, and for weeks after, I read online articles and talked with family and acquaintances.

The most consistent, constructive recommendations I identified were as follows:

1. Talk with school administrators promptly about everything that has been reported including her request to change schools.

2. Request a meeting with the school social worker and any related support staff to occur within the next few days.

3. Begin to diversify her social circles. Have activities that are isolated to specific circles. For example, her neighborhood friends, gymnastics friends, and school friends. There can be overlap, but they serve different purposes.

4. Focus on her skills and talents, committing more to something she really enjoys. This will give her a sense of purpose and confidence.

5. Read social stories and talk about solutions to bullying. Trudy Ludwig has some good books that begin a general conversation.

6. Role play and practice responses to children who are doing the bullying.

7. Let her be a part of some of the conversation you have with the professionals at the school. This will allow her to build more confidence in the consistency and build more trust across environments.

9. Possibly most important, work on this now because it only gets worse. While the manifestations of relational aggression will be different, the skills a 2nd grader needs will be very helpful later in life.

We started with number 1. The administrators were very responsive. They consulted with the school social worker and talked with the teachers (who had not witnessed any bullying or relational aggression) about signs to be on the lookout for and some initial strategies to address relational aggression in the class. We exchanged a few emails shortly after the meeting to share observations and reports of bullying.

At home, we followed through on numbers 3 through 5, and we’re being mindful of number 8 and 9. It’s been over a month now and I can thankfully report that we have not needed to exchange emails or schedule a team meeting with other school support staff.

That said, bullying includes behaviors we will always be on the lookout for.

I will never know whether the nine strategies would have helped me when I experienced physical, and in retrospect, relational aggression. Based on the short-term impact the strategies have had on my daughter, I think they would have.

At the least, I know that “boys will be boys” and “that’s what girls do” is not an excuse.

◊♦◊The Good Men Project is different from most media companies. We are a “participatory media company”—which means we don’t just have content you read and share and comment on but it means we have multiple ways you can actively be a part of the conversation. As you become a deeper part of the conversation—The Conversation No One Else is Having—you will learn all of the ways we support our Writers’ Community—community FB groups, weekly conference calls, classes in writing, editing platform building and How to Create Social Change.

Facebook50Tweet1PinEmailShares51
wpDiscuz
Share this ArticleLike this article? Email it to a friend!
Email sent!