Patrick Tirino came out as a young adult, and while it took his mother some time to embrace him, he was eventually able to live his life as an openly gay man. The only problem was that he had trouble finding his community. The nightlife scene was fun but not very fulfilling. Thanks to a close friend, he found a welcoming and enriching community in an unexpected place – a Christian church.

I always knew I was gay from a very, very small age.

I’m like, “No, I was carrying Wonder Woman’s lasso.”

When I went to grad school up in RPI, I kind of started to allow those feelings and thoughts

to surface and start acting on them.

Going out to gay clubs.

that was doing theater up in the capital region.

I graduated with my degree.

independent, so I had to go back to my parents’ home in Long Island.

And while I was there kind of had to shut everything down.

And then I got an opportunity and I decided to get a master’s in education.

So I went to Hofstra and I became a hall director, which then allowed me to go outside the house

and live at Hofstra.

While I was there pursuing that degree my dad got sick with cancer.

He actually gets sick and passes.

And in that moment as I’m preparing to graduate from Hofstra, I decided that I was going to

tell my mother that I was gay.

She reacts… not good.

She felt like it was another loss for her and she cut me out of her life.

So then I start working.

I get a job as a teacher.

Christmas approaches of that year and as most Italian families, the holidays are a big deal.

I was like, how am I not spending a holiday with my mother?

The truth of the matter is I’m still gay and that’s still going to happen.

And everything that comes along with it, but this can’t be.”

She kind of reluctantly agreed.

And it was a little awkward at first.

And then slowly as I dated people, I brought them for her to meet them.

She wasn’t overly welcoming, but she was welcoming and she was trying.

And while I’m there, I’m still going out.

And what I’m noticing is, yes, it’s fun and I’m having good time and I’m meeting people

and I’m seeing what the community has to offer me.

Where I teach I one day was in a copy room and this woman walked in.

And because of my love for theater we started talking about theater and music and she said,

“Oh, are you doing any shows right now?”

And I happened to be doing a show out on Long Island, which was pretty far out from where

That weekend I’m doing the show and lo and behold, they show up.

Her and her husband show up and we started being incredibly tight.

to church, because not only is she the choir teacher at our school, she’s the minister

of music at a church in Brooklyn.

And she was like, it’s a welcoming and affirming church.

they very graciously honored me with the thought of being the godfather to their children.

In that, I had to go to the church to christen them.

And I started to meet some of the folks that were there.

It is completely mixed and heterogeneous.

There are gay members, gay couples, gay families in the church, but not exclusively.

It was a black lesbian obviously giving the sermon.

And she just had this way about her of bringing people in regardless.

Not just gay folk, but just everyone.

And I was kind of hooked then.

And I decided to go start attending regularly.

And I joined the choir at first.

I decided to become a member of the church.

I was a member for a little bit.

And then someone asked me to become an elder of the church.

And then I was asked to become the clerk of session, which is the body that governs the

This was that deeper level where your queerness resonates in a broader community.

Once I decided that I was going to be an out gay man, I wanted all the parts of my life

to be equally represented.

In all of those things I’m a gay man.

I don’t want to parcel out who I am at any one moment.

We’re a composite of many things and we are going to love your full self.

We have to love each other for their full selves. 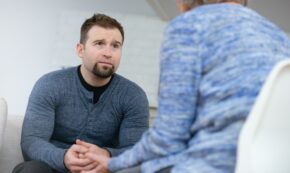