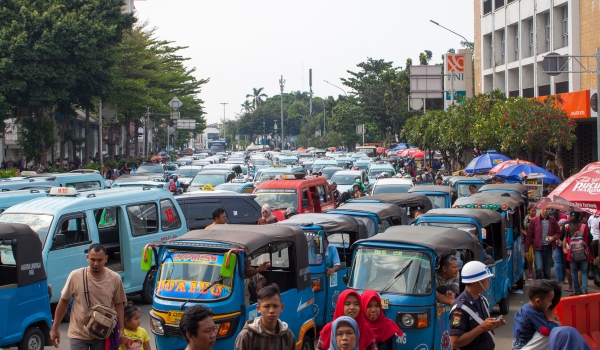 Indonesia is notorious for its traffic jams. Many people spend hours commuting each day. Jakarta and other Indonesian cities have been rated as home to some of the world’s slowest traffic.

The many causes of Indonesia’s traffic challenges include high population density and a shortage of public transport.

Fuel subsidies have also played a role. In early 2013, petrol was sold for just 4,500 rupiah (US 46 cents) per litre, well below the cost of supply.

In a newly-published study, two co-authors and I explore the link between Indonesia’s fuel subsidies and its traffic.

Using data for 19 toll roads in Greater Jakarta and elsewhere in Indonesia over the period 2008–2015, we find that supplying below-cost fuel contributed to rapid growth in road use.

In a sequence of important reforms, President Susilo Bambang Yudhoyono (in 2013) and President Joko Widodo (in 2014) implemented overnight increases in fuel prices to reduce subsidy spending.

Further reading: Indonesia’s fuel subsidy cut, a bitter pill that had to be swallowed

When fuel prices go up, people have an incentive to economise on their driving by taking steps such as car-pooling or catching public transport.

Our paper adds to evidence on the effects of public policies on road traffic in Indonesia. A recent paper in Science analysed the impact of the 2016 removal of Jakarta’s three-in-one vehicle policy.

Indonesia’s fuel subsidy reforms made sense for a lot of reasons. As well as fuelling traffic jams, the subsidies placed a large burden on the central budget. Subsidising road transport fuels is a regressive form of spending in Indonesia. More driving means more pollution.

The subsidies have yet to disappear entirely. Pertamina, the national oil company, is still exposed to losses on its sales. A fixed per-litre subsidy for diesel also remains in place. There are thus more subsidies to be cut.

Looking to a neighbour

Singapore has led the way in the use of economic instruments to manage road traffic. There is scope for Indonesia to take steps to emulate its small neighbour.

Among the approaches used in Singapore is an electronic road pricing system on congested roads. Singapore also has fuel excise and a cap-and-trade scheme for vehicle ownership.

Together with a high-quality public transport system, these policies have helped Singapore avoid the sort of traffic jams seen in Indonesia.

Reforms could be on the agenda in Indonesia also.

A trial of electronic road pricing has been proposed for Jakarta, although it has been delayed. This approach would be relevant in other Indonesian cities too.

A new fuel excise would also be an attractive way forward. Fuel excise is a smart tax for several reasons. The administrative costs of collecting excise are low, as there are only a few fuel retailers in Indonesia. Fuel excise helps to ease congestion, pollution and road crash risks. Revenue could be used to cut other taxes, reduce Indonesia’s budget deficit, or meet key spending priorities.

Public transport is also important. The first line of Jakarta’s Mass Rapid Transit (MRT) system is under construction. There is a long way to go, however, before the city could match the mass transport infrastructure of cities such as Beijing.

Indonesia’s experience provides a reminder of the benefits of getting policy settings right as early as possible in the development process.

Fuel subsidies and a lack of investment in public transport can, unfortunately, end up with the traffic in a jam.