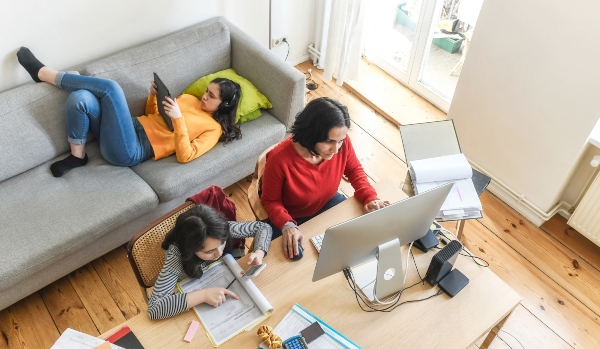 My country (Britain)’s been in lockdown for the past three months. It’s beginning to emerge from that, uncertainly and (some think) a bit too soon. What have we learnt so far about the digital society?

My overarching thought is that we’re not as close to being digital as some believed. I’ll start with that, go on to some specifics, and end with what we might be finding out.

We’re not there yet

Lockdown began with a deal of digital enthusiasm amid the gloom. “Thank goodness,” people said, “that we’re facing this today, not (say) twenty years ago before we could do everything online.”

“This is going to be the time that digital ways of doing things move forward, rapidly,” many then added. “They’re going to show that they’re the best way forward.”

Well, there’s certainly some truth in that. Yes, we’ve been able to substitute digital ways of doing things for the ways we’ve previously done them across much of our lives – or, at least, some of us have. But it’s proved more partial and less universal than some expected, which poses questions for the future.

First, the impact has been quite unequal. Those that are digitally well-connected – whether that’s in Britain or in any other country, rich or poor – have been far more able to manage their lives in lockdown than those who’re not. Those with office jobs have been able to maintain their incomes more than those furloughed from manufacturing or services.

Lockdown’s been comfortable for some, nightmare for others; and, it’s generally agreed, it’s probably exacerbated inequalities, right now and for the future. (Think, for example, of the different opportunities connected and unconnected children have to keep up with their educations.)

Second, we’ve learnt that substitution isn’t replication. Zoom meetings are two-dimensional compared with physical meetings: even for those accustomed to them, even for internet insiders, there are reasons why you want to get together in one place at one time.

ICANN, for instance, has experimented with an online meeting this year. Not everything went smoothly. Discussions were held and decisions were taken, but much of any meeting like ICANN’s takes place in corridors and restaurants rather than in conference halls. Post-COVID, it’s unlikely to continue meeting virtually.

The Internet Governance Forum will be online too this year. I don’t see that becoming regular, though lessons may be learnt about improving intersessional activity and making remote participation in physical meetings less remote and more participative.

Take my example, in three aspects, and compare with other people.

I work from home, as an independent writer and researcher, so there’s not much different now from normal. Like many readers of this blog, I have my workspace already carved out, I’m used to meetings held online, I’ve spent my days for years in front of screens. What’s new’s more Zoom time and more of it spent zooming with those who’re not accustomed to it.

Many people find they like working from home, but for others it’s proved difficult and more exhausting. Going out to work separates selling your labour from your private time, which is a good thing by and large. Working from home’s much harder in a one-bed flat than in a home that’s big enough to offer office space; harder still when school is furloughed and your kids are home. Meetings on Zoom are more, not less, demanding than meetings in offices, with mates and lunch breaks.

I shop a fair amount online, but, like most people, also like to shop in shops. Lockdown’s been boom time for Amazon but hard on businesses that aren’t set up for online customers.

And there’ve been differences. Where I live, local catering wholesalers and organic farms have upped their game, selling direct to homes as well as restaurants. I can now get better food online than I could get by queuing outside stores. But in other parts of Britain people that I know are stuck with sporadic orders from supermarkets that have struggled to maintain deliveries.

In normal times I go to the theatre two or three times a week: it’s been a big part of my life for years. Live music too. Impossible today. Yes, theatres and music venues have been broadcasting old shows online but these are much diminished experiences on screen without an audience.

I’ve turned to films instead. I’ll go back to theatres and gigs with enthusiasm when venues become safe again, but the risk is that they won’t be there: that the virus will have killed them along with so many people round the world.

What happens after COVID’s a hard question because it’s so uncertain.

Does the world go back to business as usual? Will people return to their old lifestyles – which for many where I live means commuting into work on public transport, spending their days in office meetings, their evenings in pubs and restaurants and cinemas? Or will lockdown have accelerated lasting changes in the balance between the digital and analogue?

I’m sure there will be lasting changes, but suspect that they’ll result primarily from how we respond to levels of risk and economic opportunity, and that they will make use of digital technologies that we already know rather than depending on further innovations. Four factors, I think, will be crucial as to what happens and how fast.

First, let’s look about us. Few people have enjoyed their lockdown. As it eases, here in Britain, many are taking full and quick advantage of new “freedoms”. Beaches are crowded. Families and friendship groups meet up in parks and homes. Adherence to social distancing’s diminishing.

Most will have found some things that they prefer to do online. I’ll shop for better food and watch more movies that way, for example; I’ll talk to friends and family by Zoom more than I used to do.

These are significant but they’re not fundamental. I’ll still prefer to meet friends in the park than to peer at them on screen; to see a play onstage than watch it on TV.

Some things will never be as appropriate when digital, however smart the tech. I’ve seen in lockdown that it’s possible to hold a funeral online and make it meaningful, but that can’t offer the comfort of the real thing. Grief doesn’t work so well on Zoom.

If/as the virus fades, I suspect that people will revert more quickly than many now anticipate to the normality of lives they’d led before; that the adoption of digital alternatives will be less secure than digital enthusiasts now think. But I’d suggest three things will govern that extent.

The first’s to do with attitudes to risk. Lockdown taught fear, and gradually we’ve learnt to think about the balances of risks associated with the virus that we are prepared to take. Relaxing lockdown’s going to be a similar learning experience.

Adjustment will take place over time – and there will be a lot of variation between those with different levels of vulnerability. Many younger people in my country are abandoning social distancing because they think the virus poses a much lower threat to them. I’m (almost) 65. It poses a much bigger threat to me and so my attitude to risk is different. I won’t be going into restaurants or theatres, much as I’d like to, until it feels safer to me personally.

The second’s about the economic impact of the virus and of lockdown.

Retail shops have already found it hard to maintain market share against online competitors. Lockdown’s turbocharged the shift to online shopping: a big boost for Amazon, a defensive chink of light for more enterprising local businesses. It’s easier but cuts out much of the pleasure people get from browsing shops.

If buying online becomes a habit for many more consumers, it could accelerate the loss of high street shops and the diversity and choice they offer. Will high street shopping return quickly enough to maintain high street business models in those contexts where digital shopping is a real alternative?

What of office work? Will employers who’ve been managing online choose to continue doing so and save on office costs? That may look efficient from their point of view, but it shifts employment costs onto employees and puts those workers under lifestyle stress. It could have significant negative impacts for individuals and society: on equality (who in a household combines their job with childcare?), on the viability of city centres and of public transport.

Individual countries, and the planet as a whole, face economic downturn as a result of COVID crisis. Jobs are being lost, incomes reduced, demand for goods and services diminished.

Drastic economic measures will be needed for recovery. Digitalisation may play an important part in these (though not all production can be digitised, and it’s not the best way to restore employment levels), but won’t do so alone. Investment in infrastructure and public works is one approach that governments may take; austerity’s another. That choice will have more impact on overall recovery.

The future of the virus

The third factor’s what happens to the virus. Will it surge or fade, or will it become part of our norm? As I write, infection levels are surging in some countries, including some where they had previously fallen. This crisis could get worse; the World Health Organisation think so. It could be a long time before we call it “over”.

The prospect of long-term restrictions on the way we’ve done things would reinforce existing trends from analogue to digital in employment and in other areas of life. To date, digital substitution has felt mostly temporary; after a year it would begin to feel more permanent. But that may change if returns to lockdown alter scope for economic recovery (and reduce morale of those who’d been anticipating a return to normal life).

Medical developments are ultimately here the critical determinants: What can be done to reduce the spread of infection? What treatments will become available? When will there be a vaccine?

Digital technologies have roles to play in all of these: They are being used to test, track and trace infections, not without controversy. Big data can help identify treatments to alleviate symptoms and reduce mortality. Vaccine development and trials are expedited by digital analysis. But digital technology’s not the solution here: as with the economy, it offers medics tools that may or may not help.

The COVID crisis is a testbed for the extent to which digital technologies can substitute for established ways of doing things, and how they can do so effectively. There’s much to learn from that experience, and it’s to be hoped we learn what works best for citizens and employees as well as governments and businesses.

The extent of digital substitution will depend above all, I would suggest, on two things: the duration of the crisis and the extent to which people feel online alternatives are as good as (or better than) offline equivalents. There’ll be a spectrum here, between individuals and sectors, but I think there will be many areas of life in which people will prefer the old ways and go back to them.
—

Previously published on apc.org under a Creative Commons License.