Shirin-Banou Barghi created this series of graphics dedicated to those killed by police officers. 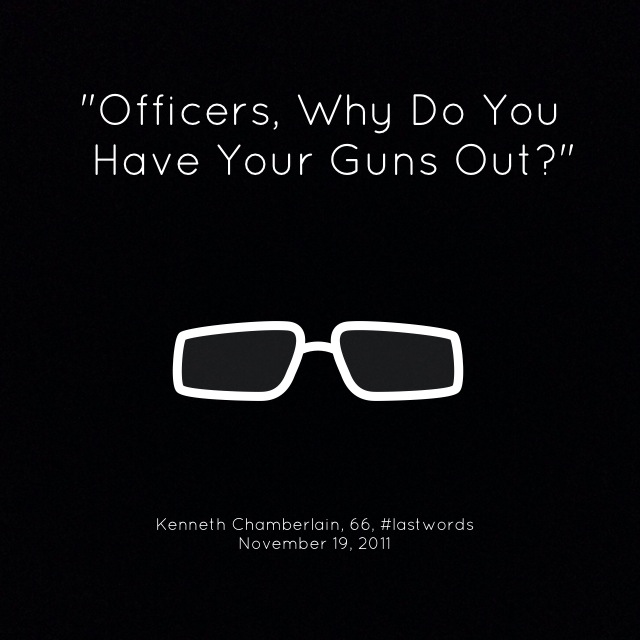 She pushed out a back door and ran into the darkness beneath overarching oaks. He lay on the floor near his kitchen, two bullet holes in his chest, blood pooling thick, dying. -mobile.nytimes.com 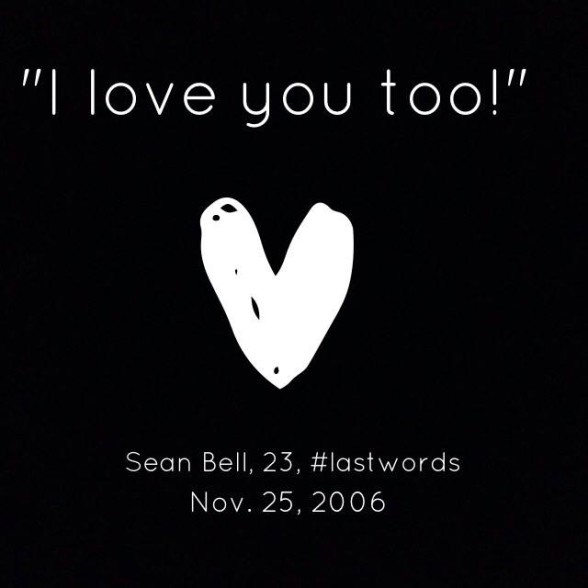 At one point, Guzman says, he spoke to Sean Bell and said, “S, I love you, son.” He says Bell said, “I love you too.” Then Guzman says Bell “stopped moving.” –abclocal.go.com

Mehserle testified that he meant to zap Grant with his Taser in an Oakland station – but instead pulled his .40 caliber handgun and blasted the man. -newyorkdailynews.com

“A man was watching him,” said Rachel Jeantel, 19, who was on the phone with Martin just before he was fatally shot. “He said the man kept watching him. He kept complaining that a man was just watching him.” -cnn.com 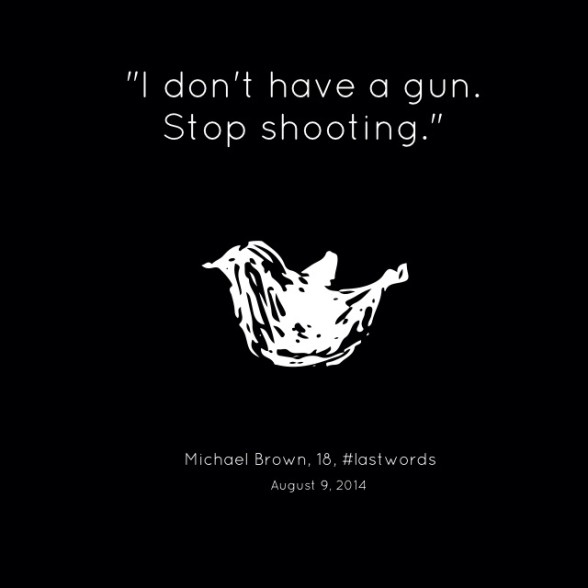 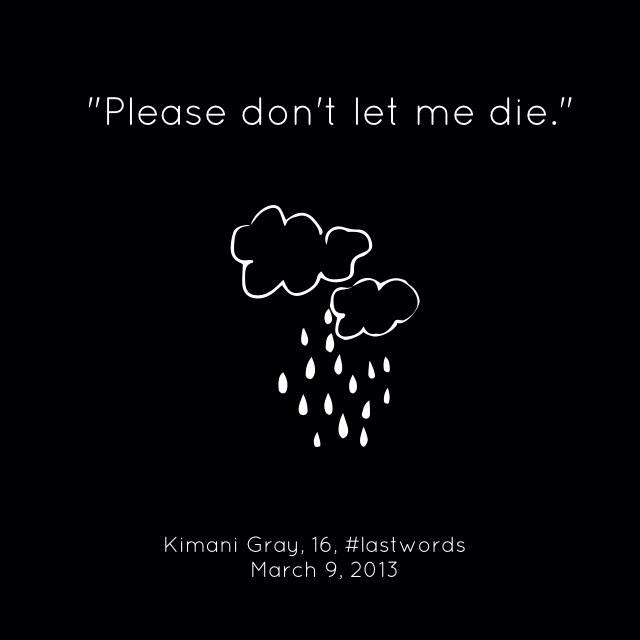 They said they thought McDade was armed because … he clutched his waste band as they chased him onto a dimly lit neighborhood street. -pasadenastarnews.com

Jonathan never had an opportunity to reply. He had bullets in him before he could ever hit the ground. So there was not sufficient warning. No one ever told him to stop. He didn’t have time to react. -huffingtonpost.com 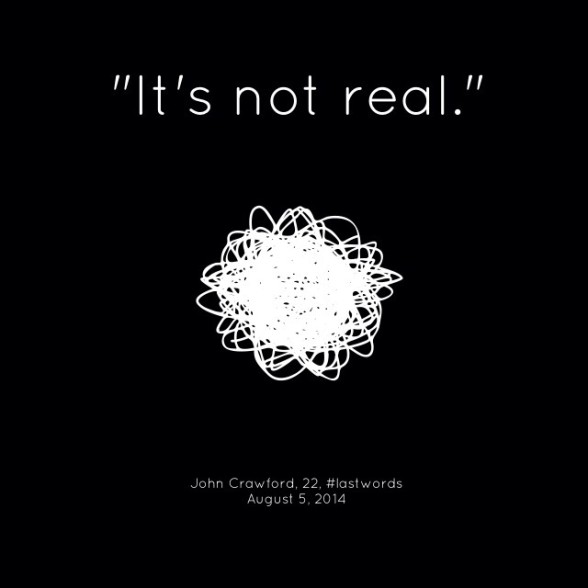 He was at the video games playing videos and he went over there by the toy section where the toy guns were. And the next thing I know, he said ‘It’s not real,’ and the police start shooting and they said ‘Get on the ground,’ but he was already on the ground because they had shot him. And I could hear him just crying and screaming. I feel like they shot him down like he was not even human. -msnbc.com

The medical examiner’s office later ruled Garner’s death a homicide, caused by the officer’s chokehold as well chest and neck compressions and prone positioning “during physical restraint by police.” -newyork.nbclocal.com 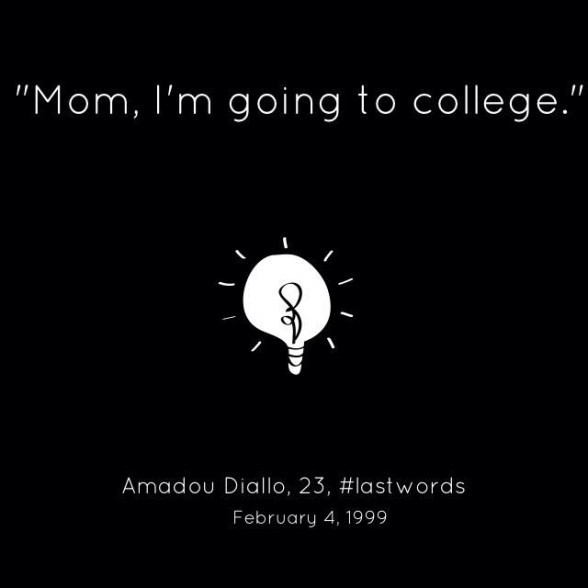 Diallo was shot outside his Bronx apartment. The police officers had mistaken him for a serial rapist, who was later apprehended. -pri.org

“The newly released cell phone footage undermines the statement, showing Powell approaching the cops, but not coming as close as was reported, with his hands at his side. The officers began shooting within 15 seconds of their arrival, hitting Powell with a barrage of bullets.” –http://m.huffpost.com/us/entry/5694224     All images used with permission.   Journalist. Photographer. Filmmaker. Shirin-Banou Barghi created this project after recent events reminded her of the 2009 uprising in Iran and the violent police crackdown against opposition supporters.   See the full project at Shirin-Banou Barghi’s Facebook or Shirin-Banou-Barghi’s Imgur.

Yup. His testimony was fabricated.

Trayvon wasn’t shot by the police.

a Self-Appointed Neighborhood Watchman who studied to become a Cop………. damn near the same thing SMH

Are you kidding me?

Hell, I guess I’ll study to be a doctor and self-appoint myself as a damn pediatrician then. SAME THING!!!

Funny how in lists like these you never know whether the title says “men” because, as it turns out, the thing described (almost) exclusively happens to men, or whether the title was there first and served as a selection criterion. This is not a moot point, it has implications.

You seek freedom and liberty in the United States but then question the manner in which it is provided. This is a gross misrepresentation if facts. Maybe you should do a tribute to the thousands of police officers killed in the line of duty providing the very freedom and safety that you enjoy on a daily basis.

Police do not exist to provide “freedom and safety” but to enforce the law. Period. An armed and alert citizenry would provide real security. 9-11 happened because the people on those planes were disarmed and left helpless by their own government. A homeowner in Texas was recently acquitted of killing a SWAT cop who burst into his home in a 6am “no knock” raid. As long as these violations of the Bill Of Rights continue, people will never trust police. Are you an officer?

Vicki Weaver – shot while unarmed, standing inside behind a door, while holding her baby. No words…just dropped dead from a deer-rifle bullet fired by an FBI agent.

Sammy Weaver – 12, shot in the back by Bill Degan and/or other federal agents while retrieving his dog.

This is powerful. It should probably have some kind of warning, though.
Thank you for sharing.

And the women, including wives and girlfriends.

What about the womenz ha?

END_OF_DOCUMENT_TOKEN_TO_BE_REPLACED

Facebook2.7kTweetPin1.4kEmailShares4.1k
wpDiscuz
Share this ArticleLike this article? Email it to a friend!
Email sent!