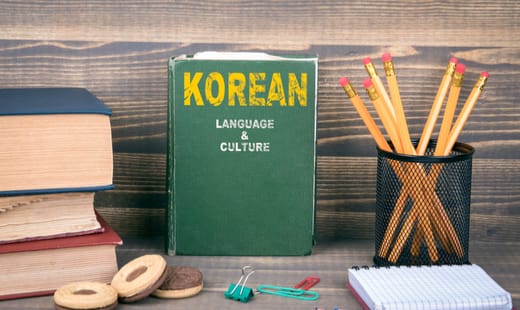 So I have been taking Korean lessons since September of 2018.

And I won’t lie—it’s a difficult language to learn but I love it. In the past, I have learned Spanish, Hebrew, and some French. But none of those are anything like this. The grammar is different, the way the characters work is different, the way you write is different…it’s all a complete shift from how my mind functions with words.

I am repeating the class I started with (I didn’t do well on the written part) but I am very comfortable with that. My goal is to really be able to speak and understand this language in a way I really can’t with the other languages I have taken. Growing up in Los Angeles (specifically in the Hollywood area), the Korean community, language and culture has always surrounded me. It’s been a key part of my city. I think of it as a very integral part of Los Angeles as much as I think of the fact that because I remember a modicum of my high school Spanish, I can get around easier and help people better sometimes.

I will always respect the fact that some places in this city are not my spaces and not meant for me, as a white girl. But I am grateful to have been given the opportunity to learn Korean at the location I am studying at and with the teachers who are working so hard to help me learn. I feel like, in this way, I might be able to build more bridges or connect more with my city and the people in it, even though my original goal in learning Korean was for an academic project. It’s a two-for-one deal!

A few things have happened since I started learning Korean. The first thing (which didn’t surprise me at all) was how non-objective and how selective the histories I had read about Korea were. But they weren’t written from the Korean perspective. So, y’know, go figure right?  While I had done research on the Korean War a few years ago (I was writing on Korean cinema) I had absolutely no idea the history of the country was as cruel or brutal as it is.

One thing I have considered as I have been studying Korea’s history is certain parallels to the darker moments in Jewish history. Under Japanese imperialism, the tensions and atrocities committed were not dissimilar to those seen in the pogroms. I would actually say, due to the technology and political issues, what happened in Korea was worse. However, as I was reading certain accounts of regular people, these violent intrusions and the complete horrors that were visited on them…it just made me consider my own family’s history.

But maybe that’s just fascism? Maybe all communities that suffer under imperialism and fascist terror have these cycles?

Learning Korean history and culture has been as critical as learning the consonants and vowels. It has completely changed the way I look at the films I value so highly and even the soapy dramas I watch.

So bottom line, I’m having a really wonderful experience and it’s enriching my life in countless ways. There is a problem though.

There are oodles of people who ask me why I’m learning Korean in a way that is clearly racist. They don’t know they are being racist, but they are. Which is like…the whitest thing ever. To not know you’re being racist but be racist. IT’S REALLY ANNOYING, FELLOW WHITE PEOPLE. CAN YOU PLEASE STOP? THX.

It mostly happens when I’m on my way to class and mostly if I take a Lyft. It’s usually a shared one because it’s less expensive. My driver will be polite and he’ll usually ask what everyone is up to, etc.

I’ve never had a driver be weird about me taking Korean language lessons. They have always thought it was interesting or say something to the effect of, “Isn’t that difficult?” to which I answer, “Yeah, it’s really hard, but I feel like I’m getting better!” (because I do which is fucking awesome)

I have had other passengers be weird though. I have had outright racism where even the driver gave me a look in the rearview mirror and was like “OMGZ did that person really just say that about the Korean language?” but mostly it’s this sugar-coated nasty remark that makes me shiver inside but I can’t really say anything because I just have to get to class so I have to try to…handle them and tell them they are being inappropriate in a nice way. I want to tell them they are in poor taste but…I can’t. It’s frustrating.

“Oh, you’re taking Korean? *Whhyyyy* would you take that? Why not take Spanish or something? Do you really need it?”

“Isn’t Korean, like, really hard? Does your work require it or something? I would never take something like that if I didn’t have to. Sounds terrible.”

“Do you have to do it for school? No? Then why are you bothering? Can you even use it?”

There’s more I’m sure I’ve managed to forget but those are just a few choice remarks. Fun, eh? Not really.

I love my city but sometimes the people here drive me crazy. One of the best things you could possibly do for yourself is to learn another language. The US is one of the only places where the majority of its people only speak one language. It’s pretty depressing. When you are able to learn (or even attempt to learn) another language you are able to explore other people and their culture. You have the opportunity to become a better person. Who knows? Maybe that’s why there are so many ignorant people in this country. We have stopped learning fully about other places, other languages, other cultures and so we have become stunted.

I know I will fight against that trend as hard as I can. It’s just not a trait I want to see in myself and I hope more people start to expand their horizons as well.