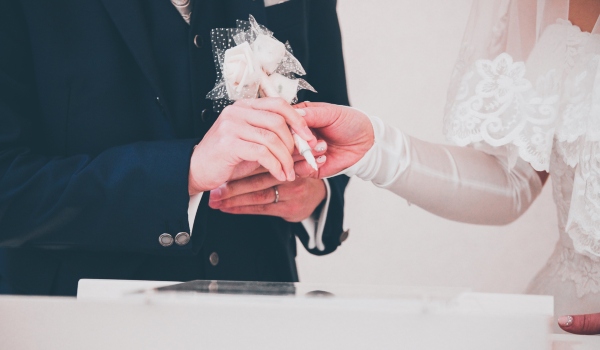 —
Today I sent the following letter to the Maryland House Judiciary Committee, which is scheduled to hold a hearing on these bills tomorrow. Under current law in Maryland, marriage is permitted as young as age 15 with parental consent and evidence of pregnancy or childbirth, and age 16-17 with one or the other, and these exceptions are granted by county clerks rather than judges. By my calculations, from 2008 to 2017, based on the American Community Survey, the annual marriage rate for girls ages 15-16 was 5 per 1000 in Maryland, behind only Hawaii, Nevada, and West Virginia. HB 855 would raise the age at marriage to 18, while HB 1147 would establish an emancipated minor status, requiring review by a judge, under which 17-year-olds could marry. For more on the effort to end child marriage in the U.S., visit the Tahirih Justice Center site.

To the House Judiciary Committee:

My support of the bills

In general, the rise of the age at marriage and childbearing in U.S. have been positive developments for women and children, allowing mothers to devote more years of early adulthood to education and career development, which is beneficial to both adults and their children.

Very early marriage in particular is detrimental to women’s opportunity to finish high school. More urgently, research and service work shows that very early marriage is usually unwanted, coerced, or forced. Very young women should not be expected to protect themselves legally or socially from such impositions, which are usually from older men and dominant family members. Very early marriage often follows statutory rape or other sexual assault, compounding rather than mitigating the harms of these crimes against children. Rather than protect a young woman, very early marriage instead provides protection from scrutiny for her abuser(s), and makes state intervention on her behalf all the more difficult to accomplish in the following years. The privacy and discretion we bestow upon families has benefits, of course, but it also makes the family a dangerous place for the victims of abuse.

Research, including my own, unequivocally shows that very early marriage leads to the highest rates of divorce. I have written several papers on divorce rates in the United States (see references). For illustration, here I used the same method of analysis, and present only the relationship between age at marriage and incidence of divorce. As you can see from the figure, divorce rates are highest by far – estimated at 2.5% per year – for women who married before age 18. This is about twice as high as divorce rates for those who marry in their 30s, for example. (These estimates hold constant other factors; data and code are available here.) The evidence is very strong. 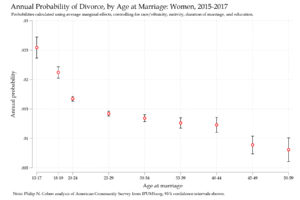 I only reluctantly support increasing state restrictions on women’s freedom with regard to family choices, but in the case of marriage before adulthood I see the restriction as a protection from the exploitative behavior of others, rather than an imposition on young women’s rights.

At present in Maryland, exceptions allowing marriage before age 18 – based on pregnancy and/or parental consent – are granted without adequate legal review. Together, HB 855 and HB 1147 would set the minimum age at marriage in Maryland to 18, with an exception only for court emancipated minors of age 17. This would improve the state’s protection of young women from unwanted, coerced, forced, or ill-advised marriages without unduly restricting the freedom to marry for younger women (age 17), who may be emancipated by a court after a direct application and careful review of circumstances.

I urge your support for these bills. I would be happy to provide further information or testimony at your request.