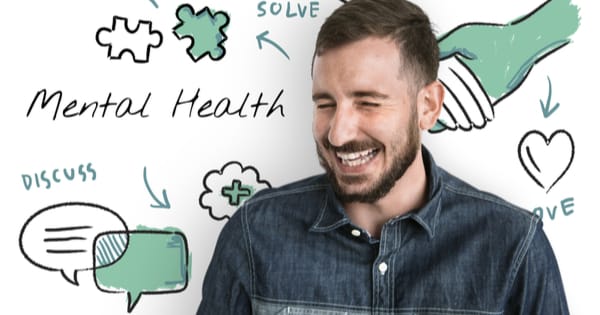 Using human experience language has been an essential part of getting healthier. It shapes the way I look at myself and the way I interact with others as a peer and in my life away from my mental health.

I originally began using diagnostic terms thinking it was easier to separate myself from schizoaffective disorder. At first, this was really helpful and gave me some space and understanding that there was some biology behind what I was going through. However, as time progressed, I’ve moved further away from diagnostic labels.

When I started as a peer specialist I introduced myself by divulging my diagnosis. I wanted to give people a sense of what I had been through and I thought to disclose the diagnosis would open up conversation. As opposed to being a conversation starter, it made me nervous and I have since moved away from doing so. A supervisor also mentioned to me that everyone may have similar symptoms; however, the reasons they manifest can be different because we all have different experiences leading into our mental health struggles so diagnostic terms may not be helpful to use.

It also shut down some conversations, while other people were really fascinated and resonated with what I had said because they have the same diagnosis. I think in the context of a conversation it has been important to talk within diagnostic terms if that’s what the person wants to do and to honor the language each person decides to use for their self. I found a lot of useful work I’ve done has been de-stigmatizing the labels of mental health diagnoses for myself and for others.

When I was first hospitalized I remember having a number of worries and concerns about how my life would turn out based upon the original label of schizophrenia which was later categorized as schizoaffective disorder. There was so much popular culture stigma around schizophrenia when I was diagnosed with it that I was terrified of just hearing the word and never wanted to use it. The stigma surrounding the diagnosis originally gave me unnecessary concerns and worries that I would wind up being like some of the people in movies or on the news who had been given the diagnosis.

I eventually realized that the diagnosis is just a generalized label for some of the cognitive and emotional cause and effect issues I had been having from trauma I had been through. When I finally realized this, a great deal of worry dropped off the table thus improving my mental health. Now, I just tell people that I’ve had mental health struggles and I was hospitalized at the same hospital I work at eight years ago. It’s been a lot easier on my mental health to avoid talking too intensely about my diagnosis and to use language that moves towards recovery.

I like to inform others as well that they don’t have to speak in diagnostic terms and they can humanize the experiences they’ve been through thus humanizing themselves. As a person, I am Steve and mental health stuff is just something I have to deal with. I don’t define myself based upon my diagnosis and symptoms and it’s been liberating when I take this angle. On the contrary, when others try to categorize me within diagnostic labels it feels marginalizing and secluding for many reasons. When the label becomes the person, this is when I feel I’m being categorized such as someone saying he’s a schizophrenic, as opposed to he’s someone who has dealt with schizophrenia. The other facet of this is I only deal with symptoms periodically throughout the day so it’s not constant and it’s not accurate to label someone by their diagnosis.

Outside of work, no one knows about my diagnoses; however, the second I have mentioned the word schizophrenia to folks conversations can shut down. Away from work if I’m not working on my mental health I’m just living my life and not necessarily thinking about my symptoms or experiences so looking at someone through the lens of a diagnosis does not give an accurate picture of who they are. Not having an accurate picture of someone can frame the way we think about them in a frame they don’t look at their self through and there can be a disconnect in therapeutic contexts.

I think it’s been helpful for my own recovery to look at myself through a non-mental health lens and it feels normalizing, as I’ve had so many experiences that made me feel marginalized. I had to do a lot of work on establishing equality for myself with others after years of having felt I was different or subservient which is not the case. Establishing equality came in the form of journaling and just making realizations surrounding my equality to everyone else who does not have mental illness.

There are certain phrases I hear that make me cringe such as mental illness and chronically ill. If no other words fit the sentence I myself may use the term mentally ill however chronically ill are words that need to be removed from your mental health vocabulary. I almost always like to use language such as mental health struggles, working towards getting healthier, going through a tough time. I’ve found when I’m using language that moves towards recovery it creates inclinations to do things to improve my mental health and also for others to do so too.

Positive language around mental health helps remove the stigma that mental health struggles are forever because as I’m beginning to learn increasingly more they are not. I started out seeing and hearing things, having disorganized thinking, not being able to speak, and sleeping twelve hours per day and I now have a full life where I own a home and work full time. I think a big part of my recovery has been the belief that others have had in me, which I eventually adopted, that I can and will get healthier. Language plays a big role in this.

The other concern with language can be when people are overly conscientious and overly concerned for my well-being. I know they mean well but it feels marginalizing when someone is treating me as if I’m fragile when I know I’m just as durable as anyone around me.  I’ll be the first to say there can never be too much kindness in the world and if this is your general nature towards everyone this is great and will definitely work in a therapeutic setting. However, I suppose sometimes when people are being uncharacteristically kind to me when they don’t demonstrate that same kindness to others feels stereotypical. I think an overlooked part of interacting with anyone who has had mental health struggles is realizing they are a person first. Person first care means that people are fully aware of what they have gone through and they know the gravity of the situation.

I find the overly kind approach creates a power dynamic of the helper and helped when I know I’m fully capable of helping myself. I know I really appreciate going out with friends and having them treat me the same way they would treat everyone else and I feel the same way when I’m in a therapeutic setting. This includes if they’re making fun of me and holding me accountable to the same standards, positive or negative, that they’re holding everyone else to. When people seem overly concerned about my well-being it feels patronizing.

I think the way to not be patronizing is to put yourself in the person with lived experiences shoes and to have mutuality with them. When people were originally overly kind to me I thought I should treat myself a similar way and sometimes we adapt the treatment others direct towards us on ourselves. I think being overly cared for made me overly sensitive in moments and I had to unlearn being so overly caring towards myself to think more clearly and to make better decisions.

FacebookTweetPinEmailShares227
wpDiscuz
0
0
Would love your thoughts, please comment.x
()
x
| Reply
Share this ArticleLike this article? Email it to a friend!
Email sent!