Get Daily Email
Join/Login CLOSE
Home / Featured Content / The Loneliness of a Short Distance Runner: Divorce in the Time of Corona 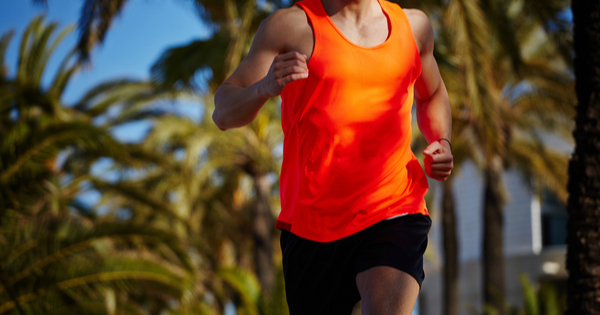 I ran past shoulder to shoulder married couples, but still they were six feet away from me. Magnolias blossomed with their white flowers casting an incense of calm remembrance. Solar votive candles lit the headstones with a warm glow. The St. Augustine grass blanketed the paired graves.

The buried couples lived together for decades. One of the two had died before the other. Then, the other died. They must have cared for each other. They had decided to lie together after life.

Once, I had felt that way about L. We had said in our vows, “You will not walk alone.” I didn’t know when we started walking away from each other but by the end it felt like the only way we could call out to each other was by shouting across the lengthening distance. Then, I felt like I ran after L. to the border of our marriage until she crossed it into divorce and I followed.

I ran alone on the sidewalk along a black metal fence. Marble archangels stood guard just on the other side of the locked gate. Nobody could visit anybody inside the cemetery.

I used to run around downtown Orlando’s busy loop at Lake Eola. I checked on the swans’ nests. They waddled, squatted, and then nestled on top of their eggs.

I passed the street people napping. They sat upright on benches between dividers. I zipped beneath the cluster of long palms. Pigeons ruffled the fronds before dropping white poop missiles. I looked at women runners’ in the eyes and they would tilt their heads away, but glance back with one dimpled-cheek and an eyebrow raised.

I took the sidewalk around the rainbow painted clamshell theater with multicultural performances. Ethnic food vendors that matched the programs sold meals to the audiences. I smiled at the kids climbing the motherly Gaia sculpture on the open lawn area. Their parents added one photo of their children posing in that place to the thousands.

I glanced at the tourists in the beer garden. They sipped while waiting to board a paddleboat. I followed fit buns in tights around the winding path. At a pagoda, couples posed. One sun-blasted man always seemed to feed the geese entire loaves of bread.

I high-fived the political pollsters. They tried to get walkers to add their signatures to amendments. I broke off from the loop by the three flagpoles that hung the Stars and Stripes, the Sunshine State’s red X and centered crest, and then the City Beautiful’s Lake Eola emblem flapping with an eastern breeze.

Then, black swans hatched from cracked eggs like an omen. A woman I had never seen before sat with a cardboard sign that read Fuck Corona! The lakeside path clustered with people escaping their indoor remote work. I became more concerned about them than the bird poop. I couldn’t see the flirts behind masks. The stage stood empty except for crows cackling doom.

Kids swarmed the sculpture of Gaia—the only place like a playground open anymore. Metal shutters sealed the bar shut. All the chairs and tables were stacked and locked against the garden’s fence like hurricane preparation. The paddle boats bobbed at the closed dock.

The beefcakes and swole gals strained and squatted with elastic bands tied to the pagoda. I could smell the supplements leak out of their sweaty skin and chalky protein powder spew out of their huffing mouths. The man who fed the geese disappeared.

The pollsters must have tucked their clipboards under their arms and thrown away their shared pens. I didn’t know why the flags weren’t lowered to half-mast. Why wasn’t Old Glory flipped upside-down to signal emergency?

Central Avenue and Eola Street clogged with parked cars. Their drivers went to picnic in the pandemic. Parents crammed double-strollers next to bicyclists pedaling on the sidewalks. Tourists clustered together as tight as the fanny packs cinched around their waists. Gangs of electric scooters beeped and then brushed past everyone. More people brought more people.

I used to love to run around the lake near other people to get away from thinking about the past of my divorce. Then, I felt scared to run closer to people while thinking about the future of the world. I needed to be O.K. running alone in the present.

And so I took off on the side streets. I wove around discarded electric scooters. I passed tourists squinting at their phone’s screens while standing blocks away from their hotels. I stepped into the lawns widening my space between families going to the lake. I spotted discarded gloves in the gutters.

I widened my loop. I counted more than ten owners with their best friends in the dog park. I saw a few sinewy people in sliders and tank-tops pumping their arms toward the expressway. I crossed beneath the underpass. I ran from the living to the dead.

The expressway served as a dividing line between L. and me. After I had moved to the center of the city, she had moved south of the expressway. On my runs I headed away from her, to the east where I grew up and my parents still lived.

After the mayor ordered stay-at-home, I talked to my parents about dying and death. I didn’t know their wishes. I didn’t want to assume anything anymore and leave things unsaid before someone was gone.

My parents shared with me what they wanted and who to contact. My parents wanted to be buried side by side. Even though her name wasn’t on the list, I would let L. know whenever that time came.

In an oak tree older than any of the plots, a mockingbird trilled a faux cardinal’s whistle and then honked a realistic car alarm. I knew that the cemetery didn’t only hold couples. Single people laid alone. They wouldn’t have someone they knew next to them ever again.

L.’s best friend C.’s mom was buried alone in the city cemetery. Even though we had once lived within walking distance we never visited. I wonder who had visited before the gates were shut and locked.

I got to the edge of the cemetery and sometimes I ran farther. I knew however far I ran away I would have to run back. I turned around at another intersection and set a pace for my return.

I ran west. I could see the SunTrust building’s towers lit up. I ran over the steps I had run. The SunTrust kept its turrets colored blue for first responders. I ran past the closed cemetery.

I knew I wouldn’t see L. since she stayed at her parents’ home. Still, I felt relief when I ran under the expressway again. I picked up my pace and dug into the sidewalk. I ended running up Church Street toward its empty houses of worship and mourning.