Get Daily Email
Join/Login CLOSE
Home / Featured Content / Men and Marriage: Why Do We Say ‘I Do’? 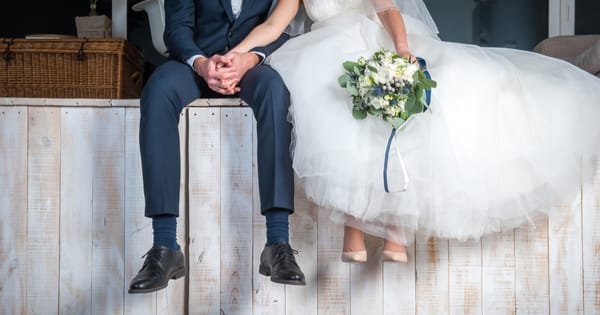 Ah, the age-old question that has many women scratching their heads. What makes a man want to stop running free and wild and settle down with your lovely self? In a world where you have to essentially “tame” some men, how can you do so without grabbing a stick, beating him over the head with it and dragging him back to your cave? I get it because I was once in this race myself, and whilst I was eternally searching for the right partner, I was also wild and free, and struggled to settle down even although in my mind I thought I wanted to.

Probably the first and foremost what makes a man want to get married is that you need to find a man that’s ready and willing to settle down in the first place. There’s no point running around trying to chase a man that isn’t interested in the slightest to settle down and have a family. Men like me, well, I was always interested in settling down with the right woman, even at the end of high school when my hormones were raging.

How do you do that? Well, I’d say experience helps a lot with this. At thirty you’re far less likely to land yourself a man that’s only interested in a fling than if you were nineteen. At nineteen we feel a bit invulnerable and that we know everything, and our parents are just old hacks intent on spoiling our fun for us. But that invulnerability ironically leaves us incredibly vulnerable, and that thinking we already have the world figured out leaves us open to all sorts of weird and sometimes wonderful partners. That’s why most people say life is a learning experience.

If there’s any advice I can impart on you it would be to definitely ask lots of questions. And I’d say that to both men and women. Paper-thin people don’t usually hold up to deep prying questions. Their answers will change if you ask similar questions, and you’ll eventually get the feeling that they just aren’t authentic enough. That’s my experience anyway.

You’re not always trying to change him

Change is hard for the best of people, so if you’re always trying to change him; the way he acts, or the way he thinks then you’re going to set yourself up for a lot of disappointment. If you read any self-help book based on relationships then it will tell you that it isn’t your job to fix him, it’s your job to fix yourself if you need to. There’s a lot to be said about feeling free in your relationship and you’ll find the more freedom he has then the more likely he will grow with you as a person.

I’ll tell you a story. I was always trying to change my dad and the way he acted towards me. It never ever worked out for me and it almost always ended up in tears, mine of course. But as soon as I just accepted reality for what it was, and that dad was never going to be the person I wanted him to be, and just accepted the reality in front of me — what would you know it? Our relationship together healed somewhat. It’s the same with intimate relationships. Let him be free and you’ll grow together.

So, I’m not saying grab a man and let him do what he wants to — of course there need to be boundaries. But within those boundaries allow him the space to have fun and grow with you.

You support his goals

My biggest cheering party in work and in life has to be my wife. When we first met I was going for my teaching qualifications and she was there every step of the way with me. Same when I landed my first job as a teacher, right up until I became project manager, and into my writing. She was always there with her cheerleader pom-poms telling me that I will do awesome, as I always am. I have a career now because of my wife; if it weren’t for her I wouldn’t have applied for some positions I have in the past because I never quite believed that I could do them, but she always believed in me — and she was right, all the time.

It’s not enough to agree with him that what he’s doing is good, it’s about constantly reinforcing the perspective that you admire what he’s doing. Get involved, ask him about his day. The fact that you are just interested in what he does when he’s away — will go a long way.

You embrace his vulnerabilities

Men are vulnerable. Most of us realize this after we grow out of our twenties. Some don’t, but the large percentage of us that do and understand that we aren’t superhumans impervious to getting things wrong now and again feel a bit vulnerable from time to time. Having that special someone to back you up and feel safe is really important. Regardless of what anyone tells you, man want safety; men want to feel safe too, and if you aren’t providing safety for him then he’s not going to feel secure in his relationship with you.

What does safety look like? It’s validating his perspective he’s just been in an argument with his family. It’s defending him to your own family, it’s supporting him in everything that you do — and in return, he will do the same with you. I’m a great believer in leading by example, and with your care and nurture to him, he will respond in similarly positive ways.

Lastly, you aren’t flaky and give up at the drop of a hat

Relationships are hard. Relationships are even harder in today’s narcissistic way of being when the only thing that seems to be important is the self, and nothing else matters. Yet I’m here to tell you that relationships take work.

My wife and I? We nearly didn’t get married. And our relationship together has been anything but plain sailing — you’ll be sure to come up against things that will tear you apart quicker at the beginning than the things that will bond you together.

Stick at it, don’t give up, these things are worth fighting for.