Get Daily Email
Join/Login CLOSE
Home / Featured Content / Men and Masks: How the Man Box Is Getting Us Killed 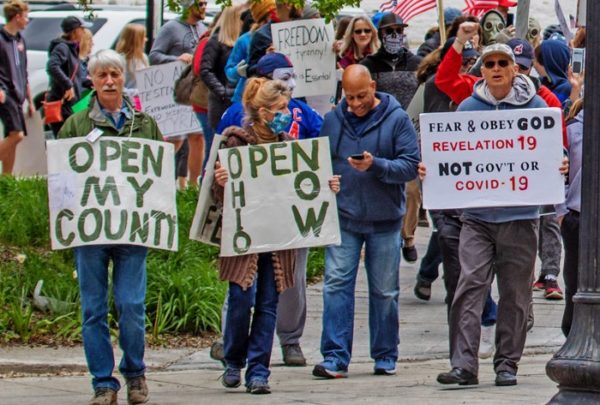 Man box culture, our domination-based culture of masculinity, is a bullying hierarchical pecking order. Boys and men maintain their status by taking abuse from those above them and dishing it out to those below.

Paul Kivel conceptualized the “Act Like a Man Box” in the early 1980’s, by asking high school boys what the rules were for being a man. It turned out the rules were pretty straightforward. They included:

• Hide all emotions
• Treat women as less, have control over women
• Be tough, never admit self-doubt, fear
• Police and bully other boys who don’t conform.

There are a few more rules, but these are central during a pandemic. Because man box culture is domination-based, it relies on constant internal policing and bullying to force conformity from men inside and outside the man box. All boys and men know they are being watched/policed.

The results for failing to conform to man box masculinity can be as small as microaggressive jokes, “What are you, a girly man? Haha!” up to and including violence and murder. But the policing in male circles, even among long time friends, is constant.

This conditions boys and men to be more concerned about having their masculinity policed then they are about caring for the people in their communities, a degree of social disconnection fostered by our emphasis on individualism, going it alone and so on. “Women do caregiving, men are tough.”

Men who refuse to wear masks to protect us collectively from the spread of Covid-19, have been trained from infancy to perform “toughness”, or face immediate bullying and policing from other men who seek to move up past them on the domination hierarchy. The narrow definitions of masculinity in man box culture are designed to encourage this level of competitive anxiety in men. Policing conformity in anxiety-inducing ways is how power moves to the top of any rigid hierarchy. Meanwhile, those on top, like Trump, don’t care about the well being of those below them. That’s how they got to the top.

So, men in man box culture will not and can not wear masks during a pandemic because it:

Covid-19 has shown a spotlight on our failings across race, class, gender, politics, and society. One very clear revelation is that female leaders, both internationally and in the US, from governors to mayors, etc, have kept their constituents much safer during the Covid-19 pandemic. Meanwhile, the loss of life in states or nations ruled by authoritarian male leaders are facing ongoing catastrophic loss of life.

See “Why Do Women Make Such Good Leaders During COVID-19?” at Forbes.com

Our bullying culture of man box masculinity is proving a disaster when illuminated in the Covid-19 spotlight. Shown this clear model of dysfunction, we must look more closely at how domination masculinity has undercut every facet of our public and private lives in equally damaging ways.

For the record, I do not condemn masculinity. It is beautiful. I condemn our dominant MAN BOX CULTURE, which bullies and polices men to contort ourselves to fit a narrow, abusive version of masculinity when we could instead find what fits for us on the vast human spectrum of masculinities.

Domination based man box masculinity, the “I got mine, now you get yours” macho, hyper individualizing view of manhood underpins predatory capitalism, environmental destruction, white nationalism, class and race violence. Man box culture is killing us, men, women, children.

It’s time to push back against man box culture as if our lives depend on it, because our lives most certainly do.

Want to learn how to undo man box culture’s harmful effects on both men and women? “First, see the culture. Then, change the culture.” Get your copy of Mark Greene’s The Little #MeToo Book for Men. The book that Dr. Caroline Heldman, Executive Director of The Representation Project calls, “Nothing short of a blueprint for men’s liberation.” 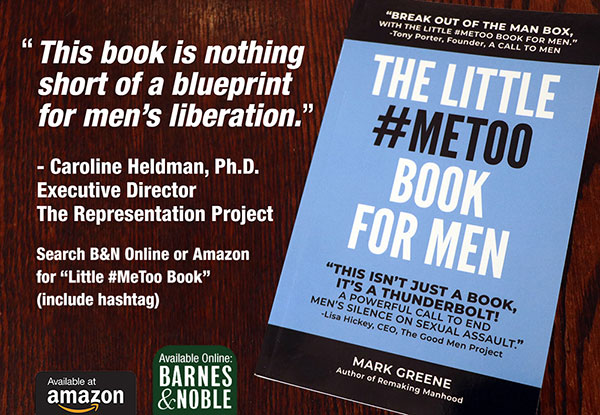 Facebook70Tweet5PinEmailShares75
wpDiscuz
Share this ArticleLike this article? Email it to a friend!
Email sent!