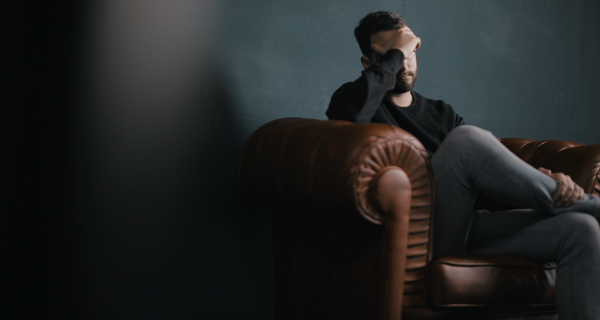 I want a man who tells me he is in therapy on our first date.

I spent my 20s dating the man who was too cool to work on his childhood issues. He smoked a joint or drank a beer or tried to turn me on when memories from his past haunted his psyche. This man thought disengaging from his emotions made him super strong. He was strong, even sexy when he fought off his emotions with fleeting pleasures. But eventually his rock hard ego cracked, and instead of showing me his vulnerability, he became detached and pushed me away.

It can be heart-wrenching to witness someone is dissociating from deep pain. I desperately wanted to heal this man. The more I tried to help him, the more he pushed me away. Eventually, he left for someone who cared less about his self growth and more about the pleasures of the moment. I walked away from our relationship feeling confused, used, and even emotionally abused. I grieved the emptiness I felt during our time together and the hopes I had for him to show up as his whole self. The man of my 20s left me with a gaping hole of longing for real emotional connection.

I spent my 30s dating the man who said he wanted to work on himself. This man talked the talk. He meditated and did yoga and read books when we first started dating. He went to therapy — well, tried it on several sessions. When the work got too intense, he gave up, stating, “I don’t need someone else to guide me. I can do my own work.” But sadly, he couldn’t.

The man I dated in my 30s projected everything onto me. Somehow all of his childhood issues were my fault. Somehow his depression and anxiety became mine. Somehow his trauma was my trauma. He wanted me to do his work for him. He stopped doing all the things he professed helped him find balance when we started dating. He asked me to go to couples counseling, because doing it alone felt frightening. I appeased his every whim until I became tired — exhausted, really. When couples therapy turned into a projection-fest and his emotional repression and disconnection caused him to act out, I walked away. Walking away from this type of man was easy, but it was also painful. He brought out my mama bear. I wanted nothing more than to see him take the reins over his own emotional growth. His denial made me bitter — and sad. I shed tears of grief when I left him; grief for the man I knew he could become. The man of my 30s feared his potential more than his own pain.

The man I’ve desired to date in my 40s is a man who owns his fucked up self. This is a man who knows we are all fucked up in some way and life is too short for denial or repression. The man of my 40s tells me he is in therapy and will be for quite some time —

”Because I have a lot of work to do. Because the more layers I peel back, the more wounds I reveal. Because healing is a life-long process and I wouldn’t have it any other way.”

When the man I want to date says these words between sips of good coffee on our first date, I will swoon.

The man I want to date is a man who knows he doesn’t have it all figured out, and probably never will. The man of my 40s openly admits he is a work in progress. This is a man who is honest about everything. He doesn’t believe in skeletons in the closet. He doesn’t try and hide his tears and he openly admits to his deepest fears.

The man I want to date in my 40s does exist. Though I’ve had to learn to wade through the charlatans to find him. He is not a man who brags about how many self-help books he reads or how often he meditates or how deep he went in his last therapy session. He is as humble as he is honest. He is at his hottest when he is most vulnerable and open.

“I’m feeling uncomfortable sharing this with you right now, I wonder what that’s about.”

This man is sexy when he tries. He listens with his whole self and speaks from that place that scares most humans: the heart.

The man I want in my 40s wants to have a tea party with me in front of our open closets. He likes tea when he talks openly about his past — not wine or beer or pot. He’s done numbing out his feelings. He’s done talking the talk just to impress. Unlike the men of my 20s and 30s, this man will become more sexy over time, because the more inner work he does, the more attractive he becomes.

At this stage in the game, I am bound to meet somebody with some type of baggage. Heck, I have my own baggage. I want someone who will own it and admit he is constantly trying to unfuck himself.

In my 40s I think a man who makes unfucking himself a priority is one of the hottest, sexiest traits.

I’m about to sign onto my first dating app in eons. I’m going to swipe right for therapy. I’m swiping left to six-pack abs and beer slinging selfies.

Men who are in therapy are just plain hot.

Facebook272TweetPin2Email1Shares275
wpDiscuz
Share this ArticleLike this article? Email it to a friend!
Email sent!