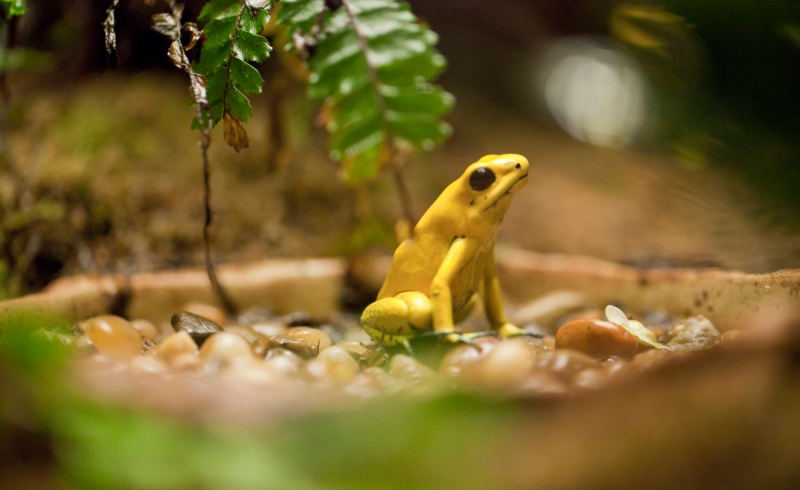 More than 500 terrestrial vertebrate species – birds, amphibians, mammals, reptiles – are on the brink of a worldwide extinction emergency. These are animal species with surviving populations of fewer than 1,000 individuals. They are to be found in tropical and subtropical regions and, significantly, they are concentrated in regions heavily affected by human activities.

Extinction is a natural part of the evolutionary process. But the number of simultaneously threatened species, and the link to direct human pressure, adds support for the argument that humanity is now witnessing the sixth, and possibly greatest, mass extinction in the history of life.

The same research has identified 388 vertebrate species with fewer than 5000 individuals in the surviving populations. Of these, more than four-fifths cling to survival in the same threatened regions, and may therefore also be heading for the brink of extinction.

Three distinguished scientists report in the Proceedings of the National Academy of Sciences that they analysed the International Union for the Conservation of Nature’s list of threatened species to identify 29,400 terrestrial vertebrates, 1.7% of which had fewer than 1,000 remaining individuals anywhere in the world.

There are many cases of local extinction: for a mix of reasons, birds or butterflies might disappear from places where they once were many, but continue to flourish in other zones. But too many local extinctions soon amount to global obliteration: the researchers identified 237,000 populations of vertebrates that had vanished since 1900.

They see an ecological catastrophe in the making, and they urge governments and international agencies to act.

“What we do to deal with the current extinction crisis in the next two decades will define the fate of millions of species,” said study lead author Gerardo Ceballos, a senior researcher at the National Autonomous University of Mexico’s Institute of Ecology.

“We are facing our final opportunity to ensure that the many services nature provides us do not get irretrievably sabotaged.”

And his co-author Paul Ehrlich of Stanford University in California said: “When humanity exterminates populations and species of other creatures, it is sawing off the limb on which it is sitting, destroying working parts of our own life-support system.

“The conservation of endangered species should be elevated to a national and global emergency for governments and institutions, equal to climate disruption, to which it is linked.”

“It’s up to us to decide what kind of a world we want to leave to coming generations – a sustainable one, or a desolate one in which the civilisation we have built disintegrates rather than builds on past successes”

Nearly a fourth of all species on the planet could face extinction. In the course of the 11,000 years since the invention of agriculture human numbers have multiplied from about one million to 7.7 billion, and are rising fast. In the last 450 million years there have been at least five major extinctions, each destroying 70% to 90% of all life on Earth.

Although creatures alive on Earth today account for only 2% of all the creatures that have ever lived, the absolute number of species is greater now than ever before. “It is into such a biologically diverse world that we humans evolved, and such a world that we are destroying,” the authors write.

Extinction may be the greatest environmental problem, because it is irreversible. It is now happening at rates perhaps a thousand times faster than the “background rate” over the last tens of millions of years.

When a species disappears, it takes with it a unique set of biological riches, and – perhaps more dangerously – it creates a loss for other species that may in some way depend upon it. Extinction breeds extinction, the authors argue.

And as plants and animals vanish into oblivion, the biosphere’s capacity to recycle atmosphere, water and nutrients, to pollinate and fertilise, and to dispose of the dead and the waste, is diminished.

By 1884 only 325 individuals were left. The prairies are now largely farmland, and the 4000 surviving wild bison can be considered, the authors say, as “ecological zombies.”

Among other steps, they want to see a halt to the trade in wildlife – thought to be linked to the origins of the Covid-19 pandemic. All three have considerable reputations within science and they have all been making much the same argument for many years.

They calculate that in the last century 543 species of land vertebrate were extinguished. The same number could go in the next two decades. Human action created the problem: only human action can repair the damage.

“It’s up to us to decide what kind of a world we want to leave to coming generations – a sustainable one, or a desolate one in which the civilisation we have built disintegrates rather than builds on past successes,” said Peter Raven, president emeritus of the Missouri Botanical Garden, the third of the signatories. – Climate News Network