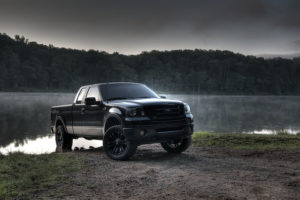 Michael Kasdan and friends are talking Super Bowl commercials. Because on Super Bowl Sunday the recipe is beer, trucks, and a flavorful dash of football.

So do you watch the Super Bowl for the game, for the commercials, or both? During this Sunday’s Super Bowl, we will get roughly 11 minutes of actual football being played. It’s the pinnacle of competition.  It’s drama. It’s athletic grace. It’s manly men doing manly things! And its on The Biggest Stage. I love it; I do.

But for every minute of on-the-field play, we will be getting dosed with a whole lot of commercials. In today’s DVR-skipping world, live events like the Super Bowl are advertising’s holy grail. So during the rest of the time (and there’s a lot of it), the NFL and its corporate sponsors will be using its mega-platform to sell us a vast array of things, including the most stereotypically “manly” and most “All-American” of items: pick-up trucks and beer.

Over at The Daily Show (the old school John Stewart Era Edition), my most trusted spot for news and social commentary, Jon Stewart once delightfully mocked the rampant commercial glorification of beer:

“Beer is magic. It turns an overcrowded sweltering city into a beach party where skateboards become surfboards and business suits become bikinis. But rest assured, our children will never be exposed to this overstated fantasy world that glorifies alcoholic consumption unless.  Unless. They watch TV . . . . I can’t sit down with my kid for a pleasant afternoon of watching grown men give each other concussions, without being bombarded by the Harry-Potter-esque transformative power of fermented hops.”

And then there are trucks. Our friends at SportsonEarth.com reviewed the state of Super Bowl commercials and gave us this handy-dandy flow-chart that tells you what type of truck you should be buying and why: 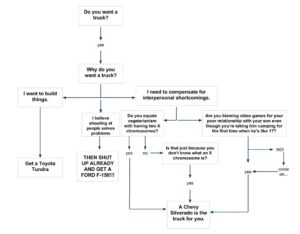 This slate of commercials made me lose faith in two aspects of American life in particular: the American concept of manliness (see above) and our dietary habits. Of the 132 commercials for food and non-alcoholic beverages during the NFL playoffs, all but 14 were for one of the following: Burger King, Checkers, Dominos, Dr. Pepper, Dunkin’ Donuts, KFC, McDonalds, Papa John’s, Pepsi, Pizza Hut, Subway, Taco Bell, and Wendy’s. We have the worst damn taste, particularly in pizza.

Finally we get to the beer. Shockingly, beer commercials were only 8 percent of all commercials, but Bud Light — the official beer of the NFL, because of course — comprised over half of those spots. This is unfortunate because Bud Light commercials are the lowest form of human expression other than actually drinking Bud Light.

Surely, aside from beer and trucks, there will also be a fair share of sex-sells commercials and commercials looking to make a memorable splash in other ways.

Now to be clear: I’m looking forward to The Big Game on Sunday! (Do the sports! Score the touchdown!)

As for the truck, I’m pretty sure I’m a Chevy Silverado guy.

The quoted story (including the truck flow-chart) was originally posted on SportsonEarth.com as The Advertising Football League. The SportsonEarth article may be read in full here. It is reposted with their permission.

There is something about a truck that I really like. I’ve had a few trucks but they were beaters.but the one I just bought …. love it. 4X4 extended cab, it’s amazing,even has the oversize wheels. My wife talked me into it especially because of the winter we’re having. BUT …. She’s just under 5′ and is having a heck of a time climbing into it. “Ford Built, Ford Tough” as the saying goes.

Ha! Does he want to build things. If so, its perfect. I hear.

I will definitely not show this to Ivan, being as he is about to buy a Toyota Tundra.

Facebook142TweetPinEmailShares142
wpDiscuz
Share this ArticleLike this article? Email it to a friend!
Email sent!