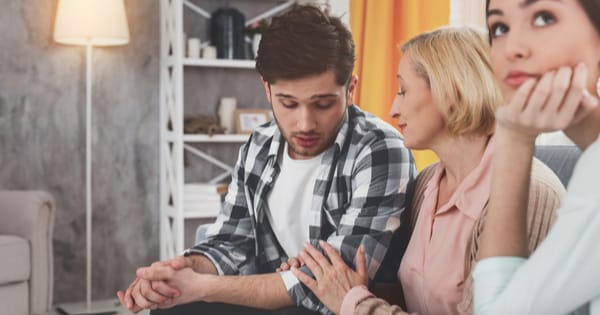 My boyfriend and I have been together for about 6 years. I love him and feel that he’s perfect for me in every way except for one thing. His mother. He’s an extreme mama’s boy. They have a family dynamic unlike any I’ve ever seen. The roles are reversed. It’s like he’s the parent and she’s the child. Also, she’s married, but she treats her husband like a child and acts more as if my boyfriend is her husband. My boyfriend goes to work, does ALL of the cooking, and has to pick the stepdad up from work. He’s even been taking ALL of her online classes these past couple of years. His mom and stepdad are financially irresponsible and are both in their early-mid 40s. They are always in a bind, but they never stress or make adjustments, because my bf puts the entire load on his shoulders. His mom doesn’t work (by choice), and the stepdad works at a bowling alley, yet they have a 4 bedroom home they can’t afford without my bf’s income. The whole situation was annoying before, but it wasn’t unbearable. I was always at their house before, so it wasn’t really a problem. Now that I have moved into my own apartment, it’s a struggle to get him to come over. He never has time for me, because he’s either working or taking care of his mother’s many needs. I went from just being annoyed to often pissed off. We’re both 28 now, and I’m scared because I want to settle down and build a life with this man. He’s told me that he knows that he wants to marry me, but he wants to be financially stable. I just don’t see how he’d be able to save money to be stable when damn near all of his money and time goes to her. I know for a fact his mother can’t afford her lifestyle without him, and I don’t see him leaving her to fend for herself. What should I do?

In Love With A Mama’s Boy

Dear In Love With A Mama’s Boy,

Do you want to build a life with this man because you’re 28 and scared? Or, are you marrying him because it’s him and you (and maybe even his mama) to the end?

If you’re going to marry him, I think you’ve got to be, first and foremost, the kind of woman who doesn’t overlook his mama’s boy tendencies nor waits for proof that he’s outgrown them but, rather, has put those tendencies into perspective.

Heading into marriage with financial stability may make you both breathe easier but it’s not going to kiddy proof your marriage from crashing and burning. I mean, let’s fast forward the tape for a second and play around with some hypotheticals: Your boyfriend’s mom and stepdad become financially responsible overnight. Perfect. Now, your boyfriend can save his money for you and him. Tomorrow you’re getting married. However, just because his parents can now afford their 4 bedroom home without his income doesn’t mean they can afford to live without their son’s constant presence inside their home. Are you going to feel any more comfortable—or stable—having a husband who saves his money for you but isn’t able to save his time?

When this happens, we tend to emphasize the drama happening around our relationship because the drama distracts us from the emptiness we are experiencing and the gravity of having to address what’s gone amiss within ourselves. Making our problems about others becomes just a quick fix solution. All we have to do is point fingers and go reaching for evidence that X is the distraction and getting rid of Y and resolving Z is the answer. It’s reductive thinking, and it’s seductive too. Making our relationship problems about the people—in this case, the family—who are in the way, frees us from having to claim our own emotional baggage and talk straight from our heart.

Who can blame you? After six years together, it’s more calming to think the only problem with my boyfriend is his needy mother versus my boyfriend is perfect for me in every way except for one thing, I feel really alone.

So, how do actually solve what this is actually about?

You stop making it about—or letting it be about—his parents and their collective finances, and make it about you. You tell him what you told me, that is, that he acts more like the husband to his mother than the boyfriend to you. Cringeworthy, I know, but you’ve got to get to the heart of this.

Tell him that, after six years together, you’d feel like he’d prioritize your relationship but, the simple fact that it’s a struggle to get him to come over makes you feel like you’re being phased out. Or, maybe even own your feelings a bit more. Say, that while you don’t want to, you’re catching yourself phasing out of this relationship because you’re not together enough. Say that wanting to marry you doesn’t satisfy you in the short-term for two reasons, (1) if he makes it all about being financially stable, you’re afraid he’ll never be ready and (2) that the experience of wanting you has begun to feel passive. Tell him, that to see him in your future, you need to see more of him now—you need to reconnect.

At the same time, you’ll need to put your boyfriend being a mama’s boy into perspective. This is a game changer. Either he’s an enabler, that keeps his mom and stepdad dependent upon him by continually recusing them, or he’s the backbone of that family.

If you see him as an enabler, you’re going to look down upon the three of them. You’ll pity them. And, in full disclosure, I already hear a bit of that tone in your letter. But these are the facts: Your

boyfriend cooks and cleans for his family. His mother does not have a degree or a job. His stepdad works at a bowling alley. They live beyond their means. Now, they could grow beyond this but the reality that they have been this—that this is a part of their story—cannot be reversed. Can you handle that? Because when you marry into a family, that story becomes an extension of your own.

On the other side, if you see him as the backbone of the family, you may be able to not only accept his family dynamic but gaze upon him with pride. Because these are also the facts: Your boyfriend cooks and cleans for his family. He holds down a job, is a part-time student (in place of his mother), and runs a carpool service. Basically, your boyfriend is the kind of guy that will do whatever it takes to make sure his family doesn’t fall under the weight of themselves. And, you know what this might give you a glimpse into? The kind of man he will be for a family of his own. Maybe he will bust his ass for his children. Maybe he will prioritize their education. Maybe he will drop the kids off at school. Maybe he will cook the dinner and pack the lunches. Who knows. But it’s possible. And it’s possible for you to put such mama’s boy tendencies into perspective so they not only shine a more favorable light on his behavior today but his past and his future—maybe even your future together.

If you want to save your relationship, you’ll need to stop saving face and just come out with it. You’re losing faith in your boyfriend and your future; you’re slipping out of love—not because you don’t want to love him, and not because he doesn’t want to love you, but because he’s too busy for you and you’ve begun to feel like an outsider, looking in on her boyfriend and his family, and that makes you feel second best and alone. Just tell him and then ask, what can we do—not once there’s more money—but right now, with what we have?

Certified in solution-focused life coaching, Chelsea Leigh Trescott is a breakup coach, advice columnist, and the podcast host of Thank You Heartbreak. She helps her clients save their relationship or save themselves, and Breakupward.