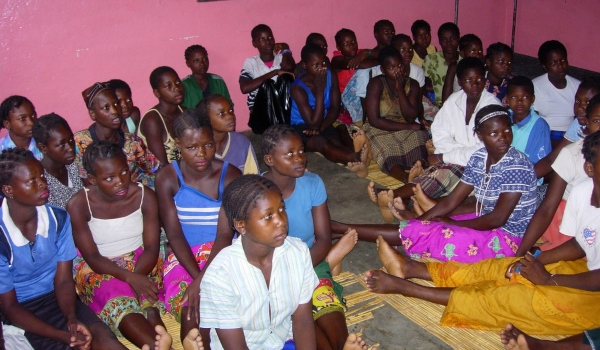 On July 18, the Assembly of the Republic of Mozambique passed a law criminalizing marriage between an adult and a person under the age of 18.

Upon the law’s approval, members of civil society organizations, who have pushed for such a law for years, shared hugs and smiles.

According to several studies, premature marriage is a decisive factor for girls to drop out of school. It also exposes them to sexually transmitted diseases such as AIDS or obstetric fistula, which contributes to maternal and child mortality.

The president of the Children’s Parliament — a civic organization working with children and adolescents from Mozambique — Kino Fernando Caetano said that:

The recently-passed law is a victory for children and Mozambican society in general. The law is the result of a true effort involving the Government of Mozambique (MGCAS), the Assembly of the Republic and the Civi Society (CECAP).

Speaking with Global Voices, Dércio Chiemo, a local teacher and social activist, points out that while the law is a victory for all actors working to eradicate premature marriages, the communities that still engage in the practice will need support:

It is a victory for the organizations that came together and fought to get this law passed. It is also a great victory for all those unheard voices and screams: screams of girls who were forced to marry prematurely, unwillingly without their consent, without being heard. […]

[But] We can’t think that [only because] this law exists, premature marriages will end, it shows that starting today we will have to start working so that people have the knowledge of the law and thus help to decrease or even end premature marriages.

For Júlio Mutisse, a bachelor of law from Eduardo Mondlane University, the problem of premature marriages go beyond the legal issue, as it’s necessary to understand the phenomenon as a whole:

The challenge is big. It goes beyond the approval of the law. As we know, our country has many good laws with serious measures about certain behaviors but we continue to witness those behaviors repeatedly.

That’s a good step, but you have to understand this phenomenon and tackle its causes. Why was the marriage regulated the way it was before? What was society like? Is this phenomenon new? We have to work on the causes and with great wit.

Meanwhile, Fernando Moiane states that the biggest problem lies in the customs and cultural habits of Mozambicans:

Yes, we need to fight against premature marriages but I think that parliament has done little work, this law finds no support in what is the culture, uses and customs of the Mozambicans. For me, this law is doomed to failure since it does not reflect the set of secular uses and customs of the African people in general and Mozambican in particular.

PS: Prepare the chains to collect all the men from Chibuto, Homuine, Mutarara, Macomia, etc.

This post was previously published on Globalvoices.org and is republished here under a Creative Commons license CC BY-ND 3.0