Get Daily Email
Join/Login CLOSE
Home / Featured Content / Music Minus Tantrums: How To Harness the Natural Rock-Power of Being a Kid 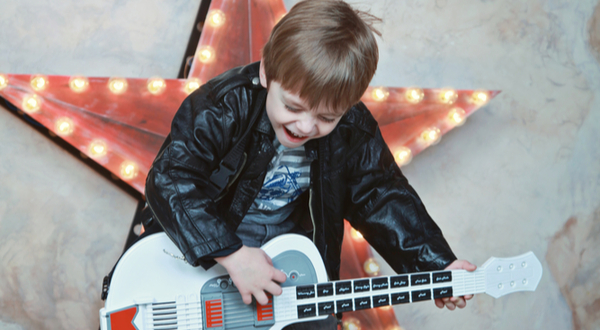 When my four-year-old son Arlen was making first contact with musical instruments, frustration abounded. We’d gifted him a kid-sized 3-string electric guitar, and his love for it was equaled only by his frustration at not achieving instant success whenever he played. The following tips can help your child connect with the music that they love, and let them know that it’s OK to feel frustrated while learning to play music.

If a child becomes frustrated with an instrument, you’ll need to do triage before anything else; you’ll need to assess whether your kid needs a hug, or if the best remedy might be a laugh or a lollipop. If I see tears, I’ll give our son a hug, and we’ll probably pull the plug and get back to it another time. But if he’s in rage-quit mode, I’ll try to make him laugh. The power of giggles to stave off a full-blown tantrum is not to be underestimated!

I got lucky right away, with a tactic that involved a little empathy and a lot of silliness. I’d console Arlen by telling him that he wasn’t alone and that most of his musical idols had experienced similar difficulties. Next, I would pick one of his heroes, and spin an exaggerated tale of an epic (obviously fictional) tantrum that they’d thrown as a child: Blues Legend Freddie King throwing his guitar to the moon in a fit of rage. Shining a humorous spotlight on someone else having an outrageous tantrum was the perfect tool to help our boy to laugh off his own outbursts.

Some kids might need a boost, something to help sustain the musical momentum until their own efforts can start paying off.  I decided to write a longer story, about a kid learning music, someone to whom Arlen might relate. Over the course of a year, the story turned into a book, and from the book sprang a pair of companion songs and an audiobook. These provided a jumpstart and tied him over until he leveled up his skills a tiny bit. These days, the momentum comes from his own daily and weekly accomplishments. A few weeks ago, he figured out the guitar riff from “Smoke on the Water” — he was absolutely over the moon, and the taste of success has made him hungry for more!

There are lots of ways to build the bridge. Write a poem, sing a silly song, build an arena stage backdrop out of cardboard, or have a few musician buddies over to jam, and let your kid watch for a few minutes.

The very first steps a child takes in learning music are going to yield very little satisfaction. (There is no tee-ball equivalent in music.) It can take a while for music to start giving back, and it’s why so few stick with it. Encouraging kids to cut loose and rock out gives them a way to physically connect to music and can serve as an immediate, built-in reward. Whenever Arlen practices his guitar (more like “plays” than “practices”, really), there’s a whole lot of head-banging, butt-shaking, and hamming it up, all woven into the routine – and of course, those are his favorite bits. It’s the spoonful of sugar that helps the medicine (practice, discipline, paying attention) go down.

There are countless things in a child’s life over which they have no control. When they do get to feel like they have a bit of agency, it can have a powerful effect. Kids are far more interested in learning music if it involves music they enjoy.

Ever since he was in diapers, Arlen has been obsessed with loud guitars and ACDC, so, I made sure that our earliest efforts at teaching him music, including my little book project, were anchored in the ethos of his favorite music. Be a chaperone on your child’s musical journey, but whenever possible, let them be the one steering the ship.

Chances are, your kid will want to play Let It Go, more than The Itsy Bitsy Spider, and they’ll prefer anything over the drudgery of scales and exercises. Of course, they can’t play and practice only the stuff they like, all of the time. In some cases, they might not even be able to play their favorite song, simply due to technical limitations. But there’s usually a way to weave their preferences into the mix.

Many music publishing companies offer beginner-level sheet music for songs that are popular with children. Another option is to look on YouTube, where you’ll find an endless supply of entry-level instruction videos that cover how to play pretty much anything. With our son, I’ll sometimes use the promise of getting to learn a favorite rock tune if he agrees to complete a simple task, like playing a C scale, or even just naming the notes on the keyboard. If you can link their practice regimen to the music they love, their passion stands a better chance of surviving the struggles of learning.

When I first sat down with our son to show him the very basics of guitar and keyboard, I found myself constantly fighting off the urge to tame, to stifle. We have an ingrained tendency to make the kids be like us grownups. People who work in music spend an awful lot of time in practice rooms and studios, pursuing the “happy accidents”, and the sense of wonder that is a natural part of being a kid.

Our five-year-old boy dances like there’s no one watching; he doesn’t know any other way. He sings with abandon, and sometimes, he roars. Embrace what children already know how to do: stomping, clapping, and hollering. In the end, if your child learns something about music, wonderful, but above all else, make sure they never forget how to roar.

Check Your Head (and Theirs)

Taking some time to get inside my son’s head paid off in a huge way; I came out of it better equipped to help him learn, and I ended up with a finished book that looks pretty cool. Due to COVID shutdowns across my industry, I was able to hire some amazing friends and colleagues to help out with a few companion songs and an audiobook. Arlen had a blast getting to see the process of writing and recording songs, and it definitely inspired him to keep working at making his own music.

As parents, we’d do anything to help our children pursue and nurture their passion. Sometimes that help manifests as something big and obvious, like paying for lessons or taking a kid to a concert or event. Often, there are smaller opportunities to assist our kids: can make them giggle, we can turn shared inside jokes into learning tools, and we can inspire them with stories based on their own inner worlds. Engaging with that inner world might even inspire us adults to do some of our best work.

David Weiser is a broadway keyboard programmer and author of The Boy Who Wanted To Rock. David lives outside of Boston with his wife, rock-loving son, and a few goblins hanging about in the basement.

David Weiser has worked as a keyboard programmer on numerous Broadway, West End, touring and televised musicals, including NBC's 2018 Jesus Christ Superstar, Phantom of the Opera, Cats, and Les Misérables. His credits also include work with artists like David Bowie, The Who, and Brian Wilson. David got his start working on keyboards and synthesizers with Kurzweil Music Systems R&D, in Waltham, MA. David lives in Boston with his wife and son.