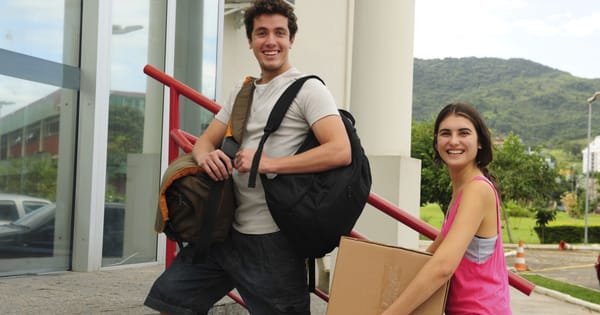 In a few short days, our oldest son, Sam, will be heading off to college. It’s one of those huge milestones in the life of both child and parent, and everybody is just a little freaked out.

My do-gooder wife, Holly, is freaked out over all the usual mom concerns.

I’m freaked out by all the usual dad concerns.

Sam is freaked out because … well, now that I think of it, Sam isn’t freaked out at all. He is an intelligent, level-headed kid who is amused by our “old people distress.”

So instead of fretting over all this stuff, I decided to occupy myself by creating a kind of cheat-sheet for Sam to use as reference during his first days as a college student, not that he asked for it or particularly wants it.

In fact, feel free to use it to make your own college student uncomfortable. You’re welcome.

Without further adieu, here are my “My Top 10 Dad Tips for Incoming College Freshmen,” in no particular order:

10. Attend class, dammit. After years of study, science has concluded that a majority of college professors can become inexplicably grumpy towards students who sign up for their classes and then rarely attend. I know it’s a strange concept, but researchers are convinced that a professor might actually say something aloud — during class time and in the actual classroom — that could be applicable, as if they have a kind of “expertise” on their subject. It is also rumored that the material covered during class might even appear on a quiz at some point later. Unless you have an actual good reason to miss it, always attend class. Acceptable reasons might include: Russian soldiers parachuted onto the campus like in “Red Dawn,” and now you’re stuck in a communist prison camp. Or you’re trapped in your dorm room because a rabid porcupine is blocking the doorway. Those reasons are okay. “I didn’t get enough sleep” or “I’m not feeling it today” are never valid excuses for skipping class.

9. Get involved. Comfort zones are tough things to break out of, but it’s a necessary evil at college. Involve yourself with a club or organization right off the bat, before you have time to talk yourself out of it. Otherwise, you risk becoming that weird kid down the hall who locks himself in his room and listens to strange, loud, emo-rock all day until security guards break down his door and drag him away, never to be seen again. (In my dorm, the kid played Don Henly’s “The Boys of Summer” over and over, which essentially ruined that song for me. I’m not making that up.)

8. Get enough rest. True, you’re on your own now and nobody is telling you when to go to bed, but that doesn’t mean staying up all night to spread your newfound adult wings is somehow smart or cool. It’s not. It’s just dumb. As a result, you’ll be sleepy and dumb in class, instead of well-rested and smart.

6. Treat professors with respect. No matter how much you disagree with a professor or think he or she has goofy hair or a funny-sounding voice, remember that this person has worked hard to earn a professorship. This demands your respect, even if the professor has never heard of Lil Nas X (yes, that’s somebody’s name) or has no idea what it means to “spill tea” about someone. (That just proves he or she is a normal human being.) Your ma’ams and sirs are the order of the day.

5. Party in moderation. The entire process of drinking or smoking yourself into a slobbering, nonsensical, unintelligible fool before passing out on a nasty bathroom floor and then spending the next six hours with your head in the toilet — while tempting — is at best, counterproductive. At worse, it displays the decision-making prowess of a common garden slug. Don’t be a common garden slug.

4. Choose your politics carefully. It’s no big secret that institutions of higher learning are often active and unabashed peddlers of political thought, both left and right. As a young person with an impressionable and still-developing brain, I urge you to think for yourself. Rely on common sense and the values Mom and I tried to instill, and then decide what you believe. If you do that, we will support your choice of political preference, whatever it is, with open arms. (As long as it aligns perfectly with mine.)

3. Get a job, not a loan. This one is tough, because pretty much the entire American financial machine will be chipping away at you, trying to sign you up for their student loan or credit card. They will try to sell you on the idea that being in debt is not only normal, it’s preferable to paying for things as you go. “Building credit” is simply code for “owing us lots of money until either you die or we decide we’re rich enough, close our bank, and retire to the Caribbean, the entirety of which we now own.” Do it the old way — work hard and pay cash. It won’t always be easy, but it will always be best.

2. Take advantage of your situation. Even though four years of college may seem like a long haul, it’s only a tiny blip in the average lifetime. Things tend to get a bit more serious on the other side, which may last for another 70 or 80 years, provided you don’t get attacked by a rabid porcupine. Squeeze every bit of benefit out of your college experience! Study your butt off and make terrific grades. Accept internships and get to know professors. Don’t settle for the minimum; give people more than what’s required and what they expect. Do these things and walk away from college satisfied and proud of yourself, never regretful. (Plus, you need to land a high-paying job so you can pay me back roughly the Gross National Product of Sweden.)

1. Have fun. There’s no getting around it, Sam — college is a barrel of monkeys. It’s a hoot. Tough? Yep. Stressful? Sure. But just because life can be difficult and stressful doesn’t mean it can’t simultaneously be fun. With apologies to my Buddhist and Hindu friends, I believe that life is a once-around trip and these will most likely be your only college years, so enjoy them while they last and make them count!