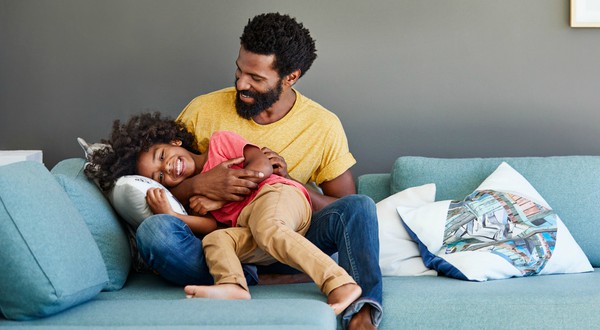 —
Examining the biology and neurobiology of fatherhood, neuroscience researchers Eyal Abraham and Ruth Feldman have concluded that the idea of women as “primary caregivers”, solely responsible for nurture and care—a “matricentric” view that’s deeply rooted in cultures globally—limits our understanding of human caregiving and child development.

Scientific enquiry shows that caring fatherhood, and cooperative care between mothers and others, has played a key role in the survival of the human race, enabling the long and substantial investment required to raise newborns to adulthood, and also enabling shorter birth intervals. Humans would not have emerged as a dominant species if active fatherhood had not emerged.

Anthropologists have observed that human babies, beginning at birth, are typically surrounded with and carried by group members other than the biological mother. Another key observation from anthropology is that human parenting varies across cultures. Sometimes fatherhood is more about active caring, and sometimes it is less so. For example, when there are large family groups with many women present, the contribution that men make to caring tends to be more limited.

With a view to evolutionary history, Feldman and Abraham argue: “If males have played an essential, albeit flexible and variable role in human parenting across human evolution by reducing Homo females’ reproductive costs, their physiological systems have evolved by selective pressures to respond to committed fathering and to provide adequate and sensitive care to their infants.” They argue that neural circuits and hormonal biology have developed in all humans such that—with practice, attunement and social experiences—all humans can provide nurturing care, irrespective of gender. At the same time, these attributes have transformed humans into a uniquely collaborative hyper-social species.

Mother-infant and father-infant pairs show similar levels of “synchrony”, that is adaptation of the parent’s behaviour to the infant’s state and social signals. Abraham and Feldman call this a “dance” between parent and infant. Mother-infant synchrony tends to display slow oscillations between states of low and medium arousal. Father-infant synchrony tends to be faster, with quicker and more sudden peaks associated with play. Fathers who are more involved in household and childcare responsibilities are likely to be more sensitive to their infants.

The hormones of fatherhood

Levels of oxytocin, prolactin, vasopressin and testosterone have been measured in fathers.

Oxytocin increases in fathers as much as in mothers in the transition to fatherhood and during the first six months of fatherhood. Increased oxytocin is associated with greater engagement with the child; this was also observed when fathers were administered a nasal oxytocin spray. Oxytocin levels tend to synchronise between mothers and fathers who are coparenting. They also synchronise between father and child – when oxytocin is higher in the father, it increases in the child.

Prolactin increases in fathers during pregnancy. It is associated with greater engagement in play activities and greater responsiveness to a baby crying.

Vasopressin levels go up in the transition to fatherhood. When vasopressin levels are higher, fathers are more likely to stimulate their child to activity. When a vasopressin spray is administered to expectant fathers, they become more interested in baby-related avatars. After the birth, administration of the spray is related to greater empathy with the child.

Lower testosterone levels in fathers are associated with more father-infant touch, gaze, interaction and vocalisation. When a baby cries, a father’s testosterone level tends to decrease if the father is able to provide care in response. If not, the baby’s cries do the opposite, tending to increase testosterone in fathers, probably linked to the father’s fears for the child’s safety.

The neuroscience of fatherhood

The adult brain becomes more plastic after the birth of a baby, triggered by hormonal changes. This happens in both mothers and fathers—and to a much greater extent than in other mammals. Because of this increased plasticity, humans have a much stronger capacity to change through the practice of direct care for the child. Interestingly, both biological and adoptive fathers who care for their infants have similar brain responses.

The neural patterns observed in this ancient part of the brain during parenting are similar to those found in other mammals. This neural activity is related to vigilance for the child’s safety and well-being.

This helps parents to resonate with the experience of the infant in the moment.

Using fMRI, Abraham and Feldman studied different fathers – full-time working fathers, fathers who were coparenting 50/50 with mothers, and gay fathers parenting without women. Caring fatherhood was associated with more activation of the empathy network, to the point that, if fathers are caring for the child wholly by themselves (without a mother present), the patterns were similar to those observed in mothers’ brains.

When mothers and fathers interact with their infants, the activity appears to tune the infant’s brain, probably resulting in epigenetic changes in the baby’s brain that alter the way the brain responds to hormonal stimuli later in life, affecting social behaviour. Abraham and Feldman call this parent-infant “brain-to-brain” synchrony.

Changes in parents’ brains through the experience of motherhood and fatherhood are associated with a child seeking safety with a parent and self-soothing when exposed to high emotions.

Changes in empathy networks during fatherhood or motherhood, and greater parent-infant synchrony early on, are associated with children using more advanced methods to control their emotions in pre-school and more expression of positive emotions. At the age of six, correlations were found between parents’ earlier neural activity, on the one hand, and children’s level of oxytocin and better physical health, on the other. When parents’ oxytocin levels are high during early interactions, children’s oxytocin levels tend to be higher in later years.

Changes in mentalising networks through fatherhood and motherhood are associated with improved socialisation in the child in later years.

When greater connectivity is observed in parents’ brains between the empathy and mentalising networks, the child is likely to have lower cortisol levels (associated with anxiety) in pre-school and lower anxiety-related problems at the age of six.

—
This post was previously published on www.childandfamilyblog.com and is republished here with permission from the author.
—
Photo credit: Istockphoto.com

Facebook84Tweet2PinEmail2Shares88
wpDiscuz
Share this ArticleLike this article? Email it to a friend!
Email sent!