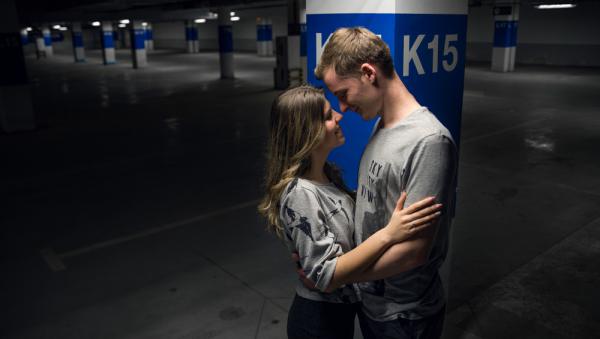 The Fab Hub couldn’t believe our engagement story hasn’t made it to publication yet. I guess it just hadn’t crossed my mind to post for any reason. Since I mentioned it in our “Random Facts” post the other day, we’ve had a few requests for details, so perhaps it’s time…

Now, you have to remember that the Fab Hub and I never actually dated – at least not in any sense that we’d admit to. We went from completely not interested to being “a thing” without much typical progression or really much to-do. There were no fireworks (they hurt his ears), no movie-style romantic gestures (aside from the ridiculously large bouquet of roses he brought to the restaurant on our first Valentine’s Day when we had dinner with his parents), and no sweep-you-off-your feet moments (unless you count tripping in front of one another every now and then). We are pretty basic everyday kind of people and the early days of our relationship went pretty much like that from the start.

Once we finally admitted to being “a thing,” it wasn’t long before we knew that we wanted to share our lives with one another. We soon hit that phase of the relationship where you know you’re going to get married and you’re both settled on it, but it has not been said to friends, relatives, etc. There is no “official” engagement yet, but for all intents and purposes, it’s a done deal.

For quite a while.

OK, maybe it wasn’t actually all that long – we met, didn’t date, got engaged, and got married all within 29 months. However. We worked together from day one so we’re talking about a relationship that can only be measured in dog years, folks. We taught in the same school building and worked together in the same after-school extra-curriculars. Every. Day. And the extra-curricular stuff carried over into the weekends. So by the time we were heading toward the two-year mark, it was more like fourteen.

At heart, we are both pretty traditional and so it went without saying that He would do the asking and She would do the accepting. All fine. After a while whenever we talked about how things would be when we got married, I would inevitably end up saying something like “yes, that will be great…but you have to actually ask me in order for that to happen” or “that would be wonderful…if you ever actually get around to asking” which would invariably elicit a response of “don’t worry, I will.” Holidays came…and went. Significant dates in our relationship history came…and went. We even went on a trip together during which everyone was convinced we would get engaged. Nope. Nothing.

Finally, I hit mildly paranoid hysteria. Why didn’t he want to marry me anymore? Why had he changed his mind? Was he leading me on the whole time? If he’s a jerk who doesn’t want to marry me, then he has no business saying he wants to. And if he wants to, he should just freaking get it over with already because I’m getting older by the minute and childbearing years are screaming by me at an alarming pace. Paranoid hysteria turned to full-on wrath. I was fit to be tied and let the Fab Not Yet Hub know in no uncertain terms the level of my pissed-off-edness.

One Tuesday, at the height of my wrathful hysteria, we were at my apartment. I believe I was slamming pots and dishes around in the kitchen. Out of nowhere, Fab Not Yet Hub decides we need to go to the mall near my apartment.

FH: “I want to show you something.”

Me: “It’s a couch. I can’t believe you bought me a freaking couch. I don’t want a couch. No. Wait. I take that back. I do want a couch but here’s an idea: how about we get a couch together and put it on our apartment. You know, the one we’ll have if you ever get around to asking me to marry you?”

And so we went to the mall.

As we pulled into the parking lot and claimed a spot, I was fuming. Now not only were we not engaged, but I was getting a stupid couch and I was missing dinner. Not cool. Then, the love of my life spoke:

“I have something I want to show you in here.”

(This man has the patience of a saint.)

Me: “Sure if you ever get around to asking me DAMMIT!”

And with that he handed me a receipt from the jeweler. I didn’t get it. A receipt? What the hell? I figured out that it was for an engagement ring, but why a receipt and not an actual ring?

As it turns out, Fab Not Yet Hub had indeed gone ring shopping but had not quite bailed the ring out and paid in full. The way he tells it, he figured doing the deed with the receipt and a visit to the store to get the thing sized was a better option than potentially ending up dead and unable to propose at all.

And so we were engaged on a random Tuesday in the parking lot of a small local mall with a jeweler’s receipt. And the rest, as they say, is history.

But wait. It gets better.

Fast forward a few years and we are at the same mall with Kidzilla who is newly sporting big-girl panties instead of diapers. We made a quick pit-stop at this mall to buy some hair ribbons for Zilla and figured we could just make a quick run in and out without the diaper bag and be on our way.

We almost made it. As we returned to the car, Zilla decided she had to pee. Sigh. The only restroom is all the way back inside and at the other end of the mall. Of course. I grabbed Kidzilla and we hauled our tuchuses to the bathroom.

We made it just in time…Zilla peed in the potty, not in her pants. Whew.

She somehow managed to pee on her pants while hovering over the toilet.

And so we hauled our tuchuses all the way back to the car – because of course, that’s where the diaper bag was – to get Zilla dried up and changed. As we cleaned up our daughter in the back seat of the car, I gave her a short lecture about how this was the first and last time she would ever be without pants in the back seat of a car. When we were finished, we stood up and got ready to load up the car. It was only then that I looked around and realized we were parked in the very same parking spot where the Fab Hub had proposed. Unbelievable. You can’t make up stuff that good.

And that, friends, is a very happy ending!