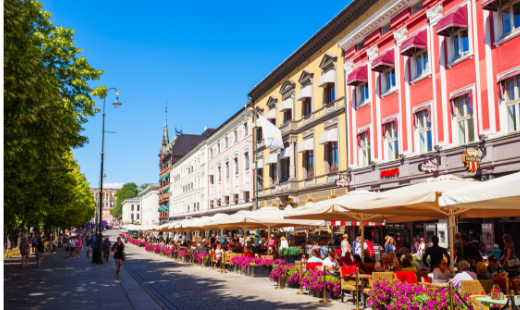 From next month, Oslo’s city center will be a car-free zone, after the authorities there have removed the final few parking spaces on its streets over the last couple of years, despite protests from residents. Internal combustion engines are now banned and the Norwegian capital now has the highest density of electric cars in the world and is a place where far fewer people drive to work, making life easier for pedestrians, who use public transport and ride bicycles or scooters in lanes created out of all those parking spaces.

The authorities in Oslo estimate that 61% of carbon dioxide emissions come from transportation and 39% from private vehicles, and so they have declared war on cars, making it virtually impossible to use them.

Oslo residents in areas where traffic is ​​restricted who don’t have access to a garage now have a problem, because the streets are finally being put to everybody’s use. In the future, when our cities have been redesigned, we’ll look back and understand that parking cars on the street never made sense: it’s unsightly and generates traffic problems as people drive around looking for somewhere to leave their vehicles.

Technology now means that electric vehicles, which in most cities are not subject to restrictions, are increasingly affordable: in response, the authorities in many countries are incentivizing their use so as to speed up the shift away from internal combustion engine vehicles. The pressure on the market now being exercised by companies such as Tesla and the imminent availability of Chinese-made electric vehicles will speed up the process. Similarly, it’s only a matter of time before we see the creation of fleets of autonomous electric vehicles offering low-cost transportation, meaning that it will make no sense to ​​own our own cars.

The statistics show that younger people around the world are much less interested in owning or driving their own vehicle, either because they can’t afford to, because they don’t see it as a priority, because they’d rather spend the money on other things, or simply because they prefer using public transportation, transport apps or other widely available options. Soon, owning a car will be something only the older generation will cling on to, at least until they are too old to drive safely.

This generational change, together with the steady increase in the availability of transportation options as a service, rather than ownership, will decisively urban planning and public spending. Suggesting, as some in the Spanish media have, that Spain needs to replace its current fleet of 28 million internal combustion engine vehicles with a similar number of electric vehicles is madness: instead, we have to move toward a scenario where very few people need to own their own vehicle, because their needs are met by convenient alternatives.

The electric vehicle is, without a doubt, part of the future and the solution to many of the challenges we currently face. But the real solution goes much further, and is in the reinvention of transport as a service. Here’s why: think about going to work every day via a service that picks you up and drops you off, door-to-door; think about the time you’d have to read, doze, work or whatever. Now think how much the cost of that service would have to fall so that it would compensate the total cost of owning your vehicle, and how much convenience you would you lose if that service were shared by other people — carpooling — or if you had to walk one or two streets to find the vehicle. Options that today are still relatively costly will soon be much more competitive and more widely available. The solution to our transportation needs is not about owning an electric car: it is about changing our vision.

Originally published on Medium. Reprinted with permission and under this Creative Commons License. Check out Enrique’s book “Everything Is Going to Change.”