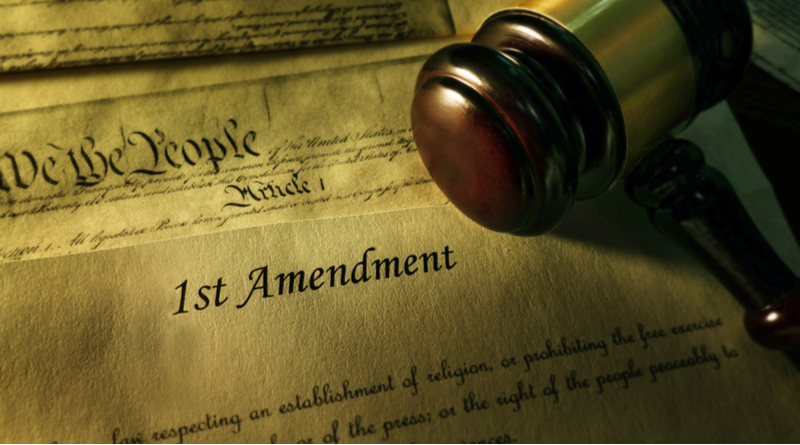 The First Amendment of the Constitution of the United States states:

Congress shall make no law respecting an establishment of religion, or prohibiting the free exercise thereof; or abridging the freedom of speech, or of the press; or the right of the people peaceably to assemble, and to petition the Government for a redress of grievances.

The First Amendment essentially grants our freedom of speech, and the freedom of the press – freedom of the written word. Thus, we can exercise our free speech. In the bigger picture: Does freedom come for free? Can we really say whatever the fuck we want? Perhaps, in an idealized world. Yet, there are consequences for our actions, and for what we say.

With great power, comes great responsibility. Our freedom of speech yields great power. Are we responsible for how or what we speak or say? Just asking.

In 2019, NBA Houston Rockets General Manager Daryl Morey tweeted, “Fight for Freedom. Stand with Hong Kong.” He commented upon the Chinese Government’s violent response to Hong Kong protesters. This occurred on the eve of NBA preseason exhibition games in Beijing including the Los Angeles Lakers and Daryl’s own Houston Rockets.

Daryl received immediate backlash from the Chinese Communist Party, calling for the cancellation of the NBA games. They also demanded that the NBA fire Daryl Morey. Consequently, Daryl deleted his tweet.

Apparently, Daryl wasn’t willing to stand for his tweeted convictions. His actions might have occurred as spineless. Although, only Daryl knows for sure. Still, it was a weak move. Just saying.

Was what Daryl tweeted that meaningful for him? Just asking. Social media is inherently unforgiving. Even the deleted tweet can have dire aftermath.

In terms of the lucrative international big picture, Daryl’s tweet threatened the NBA’s multi-billion-dollar brand expansion in China. China presents a possible 2 billion person consumer base. Consequently, NBA Commissioner Adam Silver had to clean up Daryl’s mess, resolve a way to salvage NBA business interests in China, while protecting the freedom of speech of one of his own, that being Daryl Morey.

For at least the last 50 years, the Chinese Communist Government has violated the human rights of their own people. Their reprisal against Hong Kong protesters is inhumane and repugnant.

Adam Silver did not apologize to the Chinese Government for Daryl Morey’s tweet. He vehemently defended Daryl’s freedom of speech. No, he wasn’t going to fire Daryl. In fact, he planned no further reprisal. Consequently, the scheduled NBA exhibition games were played, but the Chinese Government didn’t broadcast the games. There were financial costs associated with both Adam’s and Daryl’s actions.

Daryl Morey exercised his freedom of speech. Good for him. Yet, in the context of Global Human Rights and International Politics, who the fuck is Daryl Morey? Just asking. Does he have anything to say or do in the matter of a free Hong Kong? No.

On face value, his tweet for “freedom” was valid, was warranted. Other than some well-intentioned sound bite, what makes his tweet meaningful? What makes what he tweeted at all useful, coming from Daryl? Did he consider the possible consequences of his tweet? After all, his Houston Rockets were in China at the time? They and others were at risk, because of his actions.

Yes, Daryl is a smart man and a good man. But he’s the Houston Rockets General Manager, not a US elected government official, not a US diplomat, nor in the US State Department. He’s not in any relevant sphere of influence in the matter of freedom for Hong Kong. He’s just some dude who thought it might be cool to tweet what he did. Again, was Daryl’s tweet that meaningful to him? Well, he wasn’t willing to take the heat, so he deleted his tweet. Just saying.

I’m no businessman. I’m an NBA fan, not a professional basketball expert. So I don’t tweet, “Can James Harden’s and Russell Westbrook’s egos co-exist on the same team?” Nor do I have any yearning desire to do so.

Consider the outrageous scenario: Daryl Morey tweets, “Aikido sucks!” I tweet back, “You’re full of shit! Who the fuck are you?” That’s my freedom of speech, too.

We all have freedom of speech. Still, we must acknowledge and recognize our unique spheres of influence, our respective boundaries of credibility. Daryl’s sphere of influence is NBA Basketball. Mine is Aikido. In this case, the twain shall not meet.

Freedom of speech is our Constitutional right. Freedom is not necessarily free: we need to be mindful of the possible consequences of what we say.

Consider this ridiculous ‘real world’ scenario. I get in the face of a 250 pound, shredded mixed martial arts dude. I say, “You suck!” That’s in the realm of my freedom of speech. As fucking stupid as that might be. Note: I would never ever do this.

Should I be shocked when that dude breaks my jaw? No. Absolutely, not. That’s entirely in the realm of possible consequences. That’s the most likely outcome, too. Just guessing.

While we have freedom of speech, we have to be mindful of how we speak, what we say, and who we say it to. Mindfulness can go a long way. Freedom of speech can and will have consequences.

Not all audiences we speak to will have a sense of humor or shall be forgiving. More than just saying. Freedom of speech represents great power, and along with that power comes the great responsibility of knowing how and when to use it.

What we say needs to be meaningful to others and ourselves. If not, we might want to consider not saying anything at all. Just saying or not.

Facebook19Tweet6Pin1EmailShares26
wpDiscuz
0
0
Would love your thoughts, please comment.x
()
x
| Reply
Share this ArticleLike this article? Email it to a friend!
Email sent!