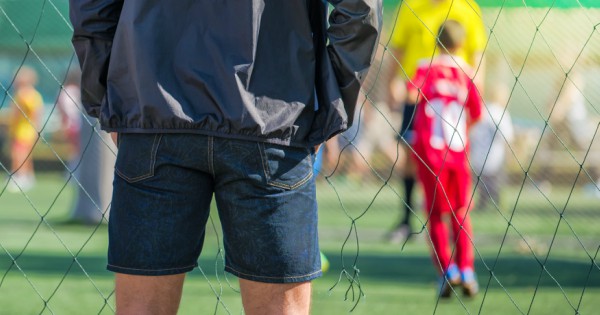 “That ball was out of bounds!” I tell my wife sitting next to me on the metal bleachers.  My butt hurts, but it’s the price I gladly pay.  Did my wife roll her eyes?  I think she did.

Being a parent-athlete is tough.  I go to every practice, sit in those hard metal stands and drink copious amounts of Diet Coke in a giant bucket that I got from the hardware store.   That’s true commitment, and I get it if the rest of the world doesn’t understand.  It’s a hard life, but one that has chosen me.

I didn’t intend to be a parent-athlete, but what are you going to do when greatness comes calling?

At practices, the parents around me talk about traveling teams, club teams, and special coaches from the Ukraine.  I didn’t know those existed when I first started, when my daughter was only five.  But as they say, you have to start early if you hope to have any chance of making all-district.  I don’t know what that is, but it’s the collective goal for parent-athletes.  I’ve learned a lot from all of them.

For example, I am an expert in every sport my children play.  Soccer, baseball, volleyball-I apparently have Olympic level advice to give from the sidelines.  I didn’t think that any of us parent-athletes could be so knowledgeable after a youtube video watched at midnight while drinking more Diet Coke.  That was before I realized that we all had talent.  You can’t define it, the talent is tough to quantify, but it’s there.

Which is really great because I have to tell my kid what to do when the ball does something.

Some of the parents around me, during practice, talk about where they are going next.  Orlando mostly, sometimes Sioux Falls, North Dakota.  Then they will talk about spending $10,000 a summer for the gear to do whatever sport we are currently experts in.

Gotta have those ultra-high end knee pads when playing something.  Uniform shorts affect the level of play a great deal, more than you would think.  That’s why they have to be bought from a small island in the south pacific.

We are getting to the point where I don’t even know why we have to hire coaches anymore.  I should just make my children play every sport, but listen to me from the sidelines.  “Get that ball!” I’ll yell every once in a while when I look up from my phone that’s tracking my child’s stats internationally.  That’s top quality coaching.

But still, hiring coaches shows total commitment.  So we, all the parent-athletes, got together last week and decided we needed to hire a conditioning coach.  Conditioning is important, but only if done in a controlled setting with me watching from the bleachers on my canvas sports chair.  It’s nice, and it’s woven by the same little hands that made my kid’s uniform.

“I’m going to say something, that ball was out of bounds,” I tell my wife.

“We aren’t at volleyball anymore.  That game ended an hour ago.”

“Soccer. Your son is playing soccer.”

Excellent.  I know a lot about soccer.  What time do I pick up my trophy?