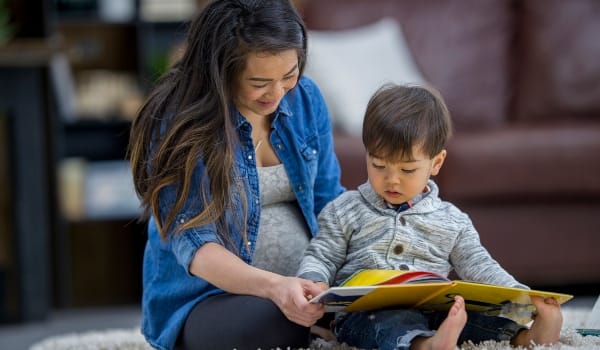 Two key perspectives have emerged to explain how poverty affects family functioning and early childhood development. One focuses on stress and how it reduces the quality of parent-child relationships and thus the child’s social and emotional development. The other focuses on parents’ limited resources to provide cognitive stimulation, resulting in less advanced cognitive development.

One activity combines both these perspectives: when parents read and play with their child. Research into the Video Interaction Project (VIP), an intervention which supports parent-child reading and playing during the first three years of life, has found a pathway towards improved development that involves both cognitive and social/emotional components:

In this pathway, cognitive stimulation by the mother and reduced maternal stress appear to be reinforcing each other through time.

VIP supports cognitive development and the parent-child relationship through parents reading aloud to their children. At 14 half-hour sessions throughout the first three years of the child’s life, a professional early years worker meets one-on-one with the parent. The session starts with a video-recording of the parent and child playing with a toy or a book. This video is used to prompt reflection with the parent, focusing on identifying and reinforcing strengths. The parent is given a personalized pamphlet to suggest further techniques and to set individualized goals.

The research worked with mothers only. (It is not explained why.) The 362 mothers were mostly Hispanic/Latina women from low-income backgrounds, recruited from a parenting and early childhood development program operating out of an urban hospital in New York, USA. They were divided equally between an intervention group and a control group.

The research assessed three aspects of parenting at both six months and 36 months by asking the mother about:

Then the child’s behavior was measured at 36 months, again by asking the mother. (The method of gathering data just from the mothers self-reporting was recognized as a limitation of the research method.)

The cognitive stimulation pathway accounted for 18% of the difference between the behavior at 36 months of children who had experienced the intervention and children in the control group who did not.

The parental stress/depressive pathways together accounted for 25% of the difference.

The mixed pathway, particularly the one outlined above involving cognitive stimulation and the mother’s stress, accounted for 35% of the difference.

The overall impact of the intervention was described as “modest”, similar in magnitude to more intense and more expensive interventions, with clinically important effects at both the individual and population level. VIP is 10 times cheaper than home visiting programs, for example.

The findings show that improved early cognitive development and social/emotional development have cascading positive impacts on each other as a child grows up, making the case for interventions that target different kinds of development simultaneously. There is nothing in the research to suggest that the same wouldn’t apply for all parents, not just mothers.