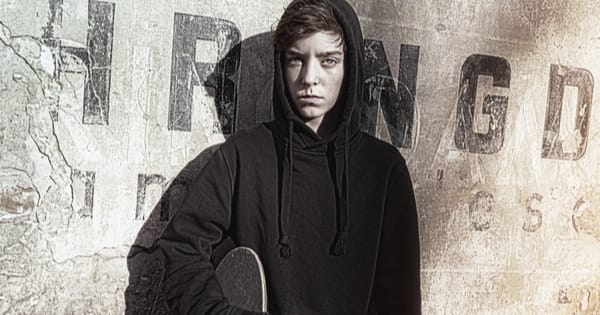 Let me explain. As parents, we are guilty of labeling kids. We witness certain behaviors, and we label our children’s friends a “good kid” or a “bad kid.” Most of us have said, “I don’t want you hanging out with that kid!” As a father, I instinctively want to protect my children. At the same time, I know I must allow them to navigate their own path — successes and failures.

The reality is all kids are just kids. All children deserve a chance

One of my son’s friends needed a place to stay for a few days and became our house guest. Through an odd series of circumstances, my 11-year-old daughter Lily and I spent the evening with this 14-year-old kid at the local Elks Lodge Basketball Hoop Shoot award ceremony. The car ride was as awkward as one would expect with my daughter and a teenage boy we don’t know all that well.

Attempting to stimulate conversation, I asked lots of questions but got the typical one-word answer you expect from teenagers. Once we arrived, the kids gravitated towards a dartboard in the far corner of the lodge. This seemed to break the ice as the kids bonded away from the adults. When dinner was served, I noticed the boy’s body language seemed more at ease, yet still, he retreated to the safety net of staring at his phone.

I had an idea — Bonding through technology

Determined to break through the teenage defense mechanisms, I texted him an article I had previously written called Watch the Red Flags with Teenagers. Since this article covers the topic of “teens in trouble,” my intention was to provoke a response. I asked him for his honest feedback from a teenager’s perspective. Suddenly everything changed.

He read the entire article. He liked my angle on older kids hanging out with younger kids. I asked a few open-ended questions designed to trigger engagement. After a few surface-level responses, the flood gates opened. For the next 90 minutes, he told us his life story.

Using active listening techniques, I was careful to respond to his comments with questions avoiding advice, counsel, or judgment. I mirrored his answers with more thoughtful and probative questions with cautious attention to maintaining a safe space.

The more he spoke, the more I saw a different boy

His aloofness was really a desire for acceptance. His silence was a rallying cry to be heard. His indifference was an effort to connect emotionally. His defensive wall of protection was begging to be torn down. I saw a kid trying to reconcile mixed emotions.

His intense admiration for the hard work and sacrifice his parents have made conflicts with the pain of being left alone, left out and ignored. I saw a fascinating dichotomy of love and loneliness — isolation and companionship — admiration without blame or anger. As our conversation evolved, Holden Caulfied appeared.

“That’s the whole trouble. You can’t ever find a place that’s nice and peaceful, because there isn’t any. You may think there is, but once you get there, when you’re not looking, somebody’ll sneak up and write “F*** you” right under your nose.” J.D. Sallinger

My daughter’s reaction blew me away

We stopped by his house to allow him to pick up more clothing for the weekend. While my daughter and I waited in the car, she said: “Dad he is actually pretty nice.” Lily was seeing him in a new light. In fact, she was truly seeing him for the first time.

When he arrived back we experienced a remarkable moment. He hopped in and immediately said, “Now, where were we in the conversation?” I think the three of us recognized we were having a special moment of genuine human connection.

The Catcher in the Rye

On the drive home, the three of us covered a variety of topics — teenage depression, bullying on the school bus, and their thoughts on how parents should respond. As we pulled into the garage, I knew the moment was coming to an end. I asked if he ever read books for fun.

He said no. Itold him about a book he would enjoy. He asked why and I answered, “because it is about you.” This answer piqued his curiosity. As we walked into my house, he followed me into my home office. I handed him my high school copy of The Catcher in the Rye.

Active listening allows others to speak their truth

You never really know someone until you know their story. You never get to hear their story until the bonds of trust are strong enough. The art of active listening creates the safety net for others to share their stories without judgment.