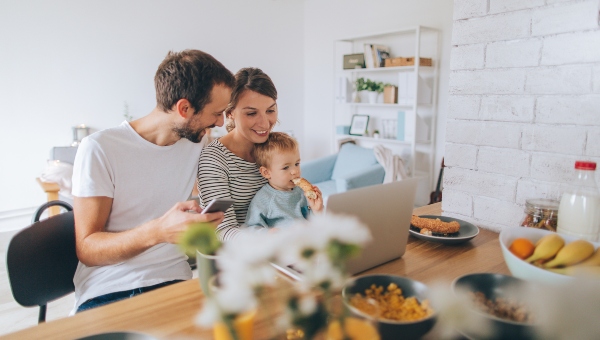 Research by a team at the University of Manchester demonstrates that a mother’s working hours are overwhelmingly the biggest influence on whether British fathers of three-year-olds share care of the child. If the mother works 41 hours or more per week, fathers are seven times more likely to share care than are fathers in families in which the mother does not work. This is the case of no matter how many hours the father works. These findings are similar to findings in Australia, Denmark and France.

Despite the higher visibility of middle-class fathers caring for their children, for example spending time in public places, working-class men are 1.5 times more likely than middle-class men to share. In these families, the mother is more likely to be working nonstandard hours so that she can care for the child when the father works, thus avoiding costly childcare.

If the child is a boy, the father is 20 percent more likely to share care.

Two University of Manchester researchers, Professor Colette Fagan and Dr Helen Norman, examined data from 9,189 families surveyed once in 2001/2002 when their children were nine months old and again in 2003/2004 when their children three years old. The data come from from the UK Millennium Cohort Study, in which parents were asked how care was organised – mostly by the mother, or the father, or another person, or if it was shared equally. Along with Professor Mark Elliot, Fagan and Norman are now exploring in a new project what influences fathers to get involved in childcare when children are older, and looking at what effect father involvement has on relationship stability.

The researchers make recommendations for policy. If the policy goal is to enhance sharing of care, then what happens in the first year is important. Enhanced leave entitlements and flexible working options for new fathers could help set long-term patterns of sharing work and care in families.
—