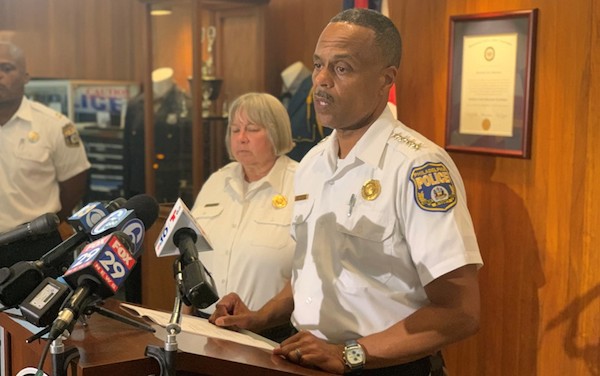 6.19.19: Philadelphia – (Politics): At a press conference Wednesday afternoon, the Philadelphia police commissioner announced that a total of 72 officers – all of whom work across various departments and districts – have been taken off the street while Internal Affairs investigates racist, violent and offensive social media posts, which were published in a database earlier this month by the Plain View Project.

Mr. Richard Ross, a 30-year veteran of the force who was promoted to police commissioner in 2015, said this is the largest number of cops who, simultaneously, have been benched due to scandal.

Over 3000 ghastly posts have been attributed to more than 300 active Philadelphia police officers, according to the database. Internal Affairs will prioritize the content which advocated for violence and death, the police commissioner said.

Mr. Ross today offered no specifics on who is either being disciplined or terminated. But he did confidently assert that some officers will certainly be met with an unpleasant fate.

However, before dishing out consequences, the police commissioner said investigators must ensure they have correctly identified each officer.

“We have a responsibility to make sure we have the right officers. We don’t have the luxury of just deducing,” said Mr. Ross, who today urged patience.

It’s not lost on the police commissioner how this Facebook scandal has besmirched the department, which employs a staff of more than 6,000.

“We’re in a lot of trouble now just relative to the impact this is having on our brand and reputation,” Mr. Ross conceded.

Hours before this afternoon’s press conference, the police commissioner and the mayor met with a coalition of community leaders, which included Mr. Ross’ pastor and the Chief Public Defender, who were alarmed by the revelation that officers had spoken so egregiously about the public.

One person who attended the meeting in the Mayor’s cabinet room spoke to me off the record. They characterized the meeting as productive and said it’s evident that both the mayor and his police commissioner are upset by the vitriolic language used by city employees.

The police commissioner on Wednesday said he’s disgusted by the whole ordeal and characterized it as an incident that an already burdened department could have done without.

On Thursday, at the final City Council session before the summer break, activists will rally in Room 400, the chambers of the legislative body here, and demand a collective statement from lawmakers condemning the alleged bad behavior of hundreds of Philadelphia police officers.

Author’s bio: Christopher “Flood the Drummer®” Norris is an award-winning journalist, online content producer and professional drummer currently serving as the CEO of Techbook Online, a Philadelphia-based news and event company, and the host of the Drumming for Justice podcast. Subscribe here.

Philadelphia police commissioner Richard Ross announces 72 officers have been taken off the street due to their role in an apparent Facebook scandal. Photo Credit: Christopher “Flood the Drummer” Norris – ©2019
—

Sign up for our Writing Prompts email to receive writing inspiration in your inbox twice per week.<