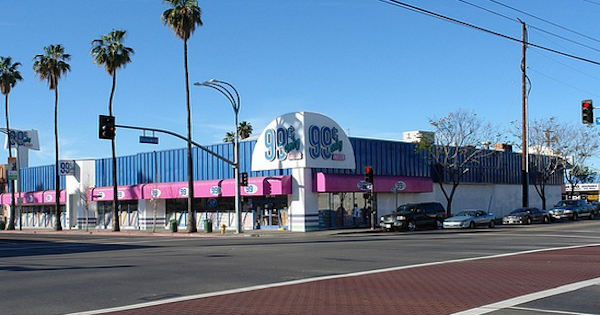 Now, a nonprofit organization, dedicated to consumer advocacy in the area of toxic chemicals, has discovered another way that lead is getting into the tissues of lower socioeconomic adults and children—from dollar store chains selling products with concentrations of the heavy metal lead that exceed even the amounts detected in the drinking water of Flint, Michigan, the nation’s poster child for such poisonings.

The 99 Cents Only Stores chain has some 394 locations in Southern California, Arizona, Nevada, and Texas that are situated largely in minority communities of color and lower socioeconomic status.

The scheme is called “pump and dump” and involves the dirty inner workings of how a discount chain like 99 Cents Only Stores procures its wares.

In this case, the Chemical Toxin Working Group (CTWG), Inc., for which I am executive director, uncovered the scheme and caught the store chain red handed. Because the levels in these foods were so immediately dangerous to the public, we took legal action and sued 99 Cents Only Stores and its supplier in California to stop this assault on our children.

It isn’t pleasant seeing kids on lead. Just ask educators in Flint, Michigan. After only a few years of exposure, kids there who were exposed to lead in drinking water are facing significant learning and behavioral challenges, and that’s just the beginning of what heavy metal poisoning does to individuals and communities. Researchers associate increased incidence of violent behavior, attention deficit/hyperactivity disorder, and criminality among young males due to high blood-lead levels. As we found, 99 Cents Only Stores was literally feeding lead to kids.

In this case, now being litigated in California, the chain needed canned shellfish on the cheap for its shoppers and went to William Purcell III and Colleen Purcell-Kangas of Purcell International in Walnut Creek, California, a company that boasts, on its website, of their expertise in the area of quality control and regulations in the area of imports.

The make-a-quick-buck attitude of the Purcells led to some of the most polluted shellfish waters on earth—the Bohai Bay of China—to score the cheap product that our group has fought to have labeled. Indeed, in a hard-fought series of cases that pitted the five biggest brands in the canned seafood industry against our tiny public-interest group, CTWG went to court and sued Bumble Bee, Chicken of the Sea, Crown Prince, M.W. Polar and J.F.E. Shoji, all in a row, and after over two years won against each of them, requiring the companies to disclose, at least in California, that their products are contaminated with chemicals (such as cadmium and lead) that are known to cause cancer or reproductive effects.

To not know of these cases requires willful ignorance: the company tried to get in undetected and sell some product quick to people who would never know, they thought. Sure, the oysters were a value—that is, if 99 Cents Only customers like lead and cadmium in their seafood at 46- and 51-times above the state of California’s safety standards.

The reason why the levels were so high in these products is because the Bohai Bay receives the industrialized flow of China’s Yellow River, which is polluted by the offal spewed from dozens of coal-fired plants, battery factories, and other industries in the Shandong province. One of the world’s longest and most heavily trafficked bridges also spans the Bohai bay, adding dangerous amounts of heavy metals to its waters and sediment. The Purcells, with all their expertise and knowledge, acquired the cheap product on behalf of 99 Cents Only Stores.

The Purcell’s brand is called Island Sun. As it turns out, after testing hundreds of consumer products, our group had never seen clams with as much lead and cadmium as those from Island Sun. I’m not allowed to disclose how much of the product was sold; nonetheless, I can’t help but consider how many unsuspecting, innocent people who bought the product happened to be persons of childbearing age, had families, or were women who were pregnant.

A single glass of Flint drinking water, at the height of its pollution problem, might have, say, an average of 25 parts per billion of lead in it. Yet, drinking a single glass of Flint water could place the fetus at toxic risk. Island Sun clams sold at 99 Cents Only Stores contained lead at 18 times greater amounts than a glass of drinking water from Flint, Michigan (plus extreme amounts of cadmium, which synergizes lead).

That means one serving of Island Sun clams consumed during pregnancy would be like drinking 18 glasses of Flint drinking water at a single meal.

These products were clearly required by California’s Safe Drinking Water and Toxic Enforcement Act to be labeled that they contained chemicals known to cause cancer and reproductive harm.

When we caught 99 Cents Only Stores and the two culprits in the midst of their scheme and sued them with our test results, the company, through their lawyers, told the court that this was just a one off, as the industry likes to call it. Their lawyers told the court that they wanted their clients to get off with a “nominal” fine, because, after all, it’s just the cost of doing business.

Sure, they sold an obscene amount of the product to Californians, and it was totally contaminated and probably did hurt the babies born to some of their shoppers, particularly if women consumed it at different points during their pregnancy when tissues are most susceptible to the tiny grains of sand the metal can be compared to.

In fact, in court, the Purcells didn’t even contest selling poisoned products. They were brazen, told the judge to get used to it, and demanded to be let off easy. Why? we asked through our attorney. They replied they’d only sold the product once or twice (meaning separate shipments to service many stores in numbers that we are not allowed to disclose). But we just poisoned them once or twice, judge. So let us off easy. It was only a few kids we poisoned. They were low income throwaways, anyway.

That’s how it is with making a buck at 99 Cents Only Stores.

Here are the dirty testing numbers for the products that Purcell International peddled to 99 Cents Only Store to put its customers at risk. Keep in mind that California law allows a single food to supply only .5 micrograms (mcg) of lead and 4.1 mcg of cadmium in a single day. These products exceeded those regulations by up to 51 times.

TWG is battling Purcell International in court right now, demanding that poisoning 99 Cents Only Stores customers should be a punishable offense that deserves a more significant fine than a traffic ticket.

I’ve written directly to Jack Sinclair, the CEO of 99 Cents Only Stores as well as the Purcell siblings, in a letter explaining that this story was going to be published and asking them to offer any explanation for why they dumped so much unsafe food on so many innocent persons, including pregnant women.

Why couldn’t they just follow the law and inform their customers? To be so willfully unaware of their responsibilities seems reckless. Did they really want to poison pregnant women and their offspring? My final question is this: would they allow their own family, wives, children, and pregnant spouses to eat this product? Their silence says everything.

Read more about HLF’s fight for your natural right to live a healthy long life—and to know what’s in your product.