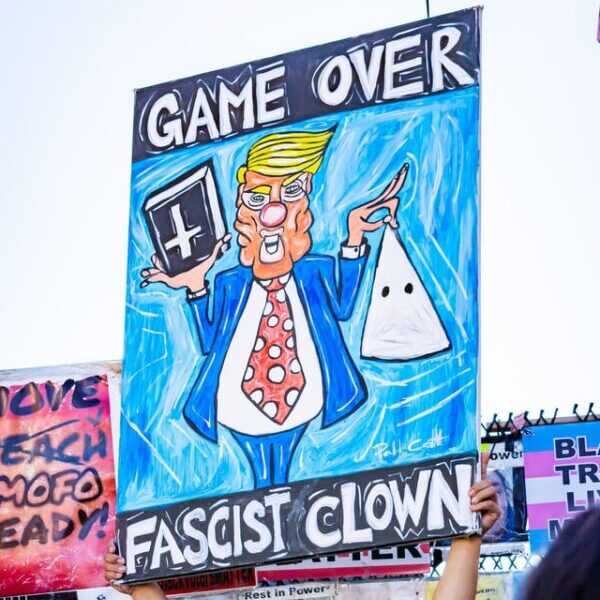 Now that DT has lost the election, I⎼ and so many others⎼ would like to just ignore him and starve his malignant narcissism of attention. Ever since 2016, there was always a desire to just turn him off. And this is the best time to do so. Last Saturday and Sunday the headlines were filled with faces other than his, of Joe Biden, Kamala Harris—and Stacey Abrams. It was so refreshing.

We wish we could just turn him off, but we can’t. He won’t let go or concede. He is so desperate; he could put our whole nation at risk. DT and his GOP followers are blatantly working to undermine the heart of the U.S. constitution, by grasping at the power to keep himself in office. At a news conference, DT’s Secretary of State, Mike Pompeo called for “a smooth transition to a second Trump administration.” At the very least, DT aims to seize the headlines, and whine “I am the victim, here. I have been defrauded once again.” He has committed so many frauds, corrupt acts and crimes, so many malignant actions, they must fill his mind so entirely he sees them everywhere.

Despite no evidence whatsoever of there being any voter fraud, a fact proclaimed by his own Federal Election Officials, DT continues with his inconsistent and false claims. For the past week, his legal team has been suing several states, at first to stop vote counting, then to dismiss or invalidate the results. He has demanded recounts, for example, in Wisconsin and Georgia. His suits have mostly been thrown out, because they have no evidence to support their claims. He made similar false claims after the 2016 election, when he proclaimed, also without any evidence, that he would have won the popular vote if “millions of people” hadn’t been allowed to vote illegally, a fact his own commission proved false.  Why stop lying now?

So, if anyone has interfered in the legal voting, it was DT and the GOP. He called the Governor of Arizona last week, and Rupert Murdoch who owns FOX News, to complain about news that Biden was ahead in the count and that Fox had called the state for Biden. DT supporters tried to interfere or pressure the vote count in several locations, including Arizona, Michigan, and Pennsylvania. Watching the scene in Maricopa County, Arizona, I couldn’t help but flash back to the scene in Florida, during the 2000 election, and the GOP supporters flown in to interfere in the counting of ballots.

DT started interfering in the election months ago, falsely claiming mail-in ballots were fraudulent, stopping states from sending them out, and stopping the USPS from delivering them. In California, the GOP put up fake drop-in boxes. And let’s not forget efforts to confuse or disenfranchise voters.

His appointee, Emily Murphy, head of the General Services Administration, has so far failed to recognize Biden’s win and release the funds and other resources so Biden can officially begin the peaceful transition of power.

Peaceful⎼ for Murphy to hold up the transition, she pushes the election into a chaotic situation that encourages anger, distress, fear and outrage, the emotional feeding ground for violence. The nation has been on edge for months, or 4 years, and this additional stress on our political system just further undermines the safety of this nation.

Meanwhile, DT is firing government officials, anyone who has ever said “no’ to him that still has a government post⎼ a move that could make the situation in the U. S. even more volatile. For example, he fired Mark Esper, Secretary of Defense, who opposed DT’s desire to send active-duty troops to quell street protests in Portland and other cities. DT fired other officials in the Defense Department and there is evidence he plans to also fire Christopher Wray, the F. B. I. Director, and maybe Gina Haspel, the C. I. A Director.

And while Covid-19 cases and deaths continue to mount (yesterday 145,000 new cases, the highest single day total since the pandemic began), DT continues to lie, to fail in protecting, or caring for the health and lives of the people of this nation. He will leave the new administration with the worst health crisis this nation has faced in over a hundred years, one he did little to contain.

And when Biden finally succeeds in entering the White House and being inaugurated, who would be surprised if DT tries to pressure the GOP into resurrecting the “party of NO” and interfering in every government function they can interfere in? Especially if the GOP hold on to a Senate majority, they can refuse to confirm cabinet nominees as well as judgeships and hold up the filling of other vacant positions. This could force the Biden administration to be more “centrist” in order to get anyone confirmed and make it extremely difficult for Biden and Democrats to actually do anything positive for us, the American people.

DT fears Biden showing voters that a Democratic (or democratic) government can improve the everyday lives of Americans. He wants to continue to divide the Democratic party as he has the nation and make anger and fear stain Biden as it stains him.

We would all like to take a breath, and we need to do that. The last few weeks have been exhausting. Let’s give ourselves a needed break, clear our minds, assess information⎼ and act effectively. We can make calls, write postcards and get out the vote for the two Senate positions up for grabs on January 4th in the run-off elections in Georgia. If Democrats win both these seats, the Senate will be evenly divided between parties.

Eight GOP Senators and six House members have already broken with DT⎼ let’s energize a movement. Make calls and protest to get more of the GOP to actually honor their oaths and protect the constitutional and peaceful transition of power.

And we need to both support and pressure President-elect Biden to issue executive orders as well as push legislation that will foster justice, economic security, and caring for the health and well-being of Americans⎼ good health care for all and a scientifically based response to the coronavirus pandemic and the climate emergency. Then maybe student debt relief, protecting voting rights, releasing immigrant children from DT’s cages and re-uniting them with their parents. Who knows where we can go from there? We can do this, just as we won this election.

Photo by Gayatri Malhotra on Unsplash
Don’t like ads? Become a supporter and enjoy The Good Men Project ad free